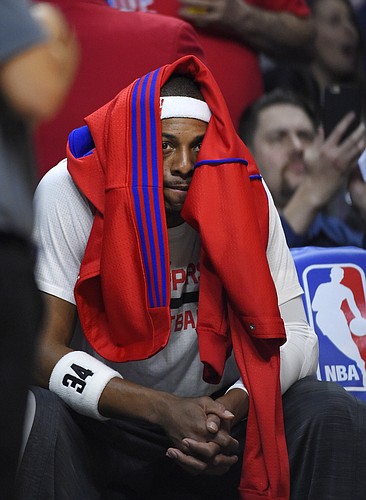 Paul Pierce has experienced just about everything the NBA has to offer in his 18 seasons since leaving Kansas.

In the next few weeks, the 10-time all-star will decide if he is really about that bench life.

Earlier this week, the small forward who earned NBA Finals MVP honors in 2008 with the Celtics told The Boston Globe his most recent season, in which Pierce also started a career-low 38 games, didn’t exactly go as planned.

“I thought I had one more good year [this past season], but obviously I didn’t like how it all went with my role,” Pierce told The Globe. “I’m still just trying to figure it out. A lot has got to do with my role I’m going to play. To come back and sit 82 games, I don’t know if I can do that.”

Injuries to other members of the Clippers pushed Pierce into a fill-in starting role late in the year, but he often didn’t play a starter’s minutes. At 38 years old (Pierce will turn 39 in October, before the start of next season), there is only so much he can bring to the floor in a league filled with world-class athletes in their 20’s.

Plus, at this stage of his playing career, Pierce said offseason training in preparation for the coming 82 games can be just as daunting.

“Really, it’s all about how I feel mentally, getting up and I’m thinking about the grind,” Pierce told The Globe. “People don’t understand, I think a lot of guys retire because of what it takes to each season. You can take the grind once you are in it, but getting ready for the grind is the hard part.”

Whether Pierce decides to go through the process one last time — he said 2016-17 would be his final season should he return — or simply call it a career, a decision is coming soon. The NBA’s 16th leading scorer in history (26,316 points) told The Globe he spoke with former Boston teammate and fellow aging one-time star Kevin Garnett about the pros and cons.

Always a great time with the guys...REAL BROTHERS👊

Always a great time with the guys...REAL BROTHERS👊 by tic_pix

While appearing Thursday on ESPN’s The Jump with Rachel Nichols, Pierce revealed he and his family are taking a vacation in late June, and when they get back he hopes to have an answer to his dilemma.

“I’m gonna take the next three weeks to figure it out,” Pierce said.

Already retired Tracy McGrady jokingly “poured one out” for Pierce’s career during the show and tried to convince Pierce to join the broadcasting game, adding: “Phenomenal career, first-ballot hall of famer.”

I get what Pierce has to say about the grind to get ready for a season. He has another year on a contract that pays him something like $4MM. He'll get a couple hundred K as a broadcaster. So the decision could be between $4MM v $400k. Hmmmm. Hmmm. Lace 'em up Paul for one last year!

I've been a big Paul Pierce fan since his first year at KU. He's been a tremendous player, college and NBA. I hope he retires now so that he's remembered for the awesome player he was when on top of his game and not as yet another sports figure who tried to hang on too long.