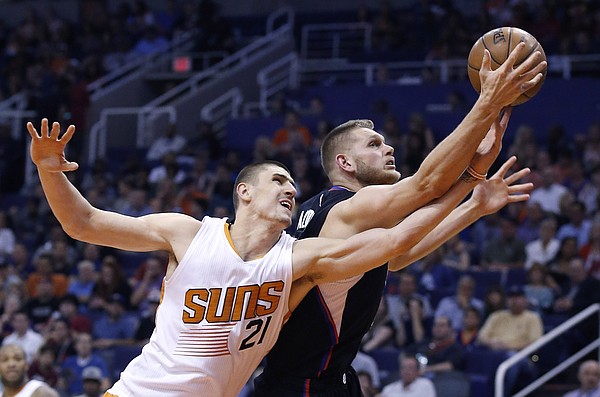 It’s not exactly LeBron James returning to Cleveland, but NBA free agency provided former Kansas star Cole Aldrich with an opportunity to go home and play for a franchise that means a lot to him.

According to various media reports Sunday, the 6-foot-11 Burnsville, Minn., native agreed to a three-year, $22 million contract with the Minnesota Timberwolves.

Drafted 11th overall in 2010 after a standout college career with the Jayhawks, Aldrich struggled to earn playing time in his first few seasons in the NBA, before enjoying some breakout success this past year with the Los Angeles Clippers.

After two seasons with Oklahoma City, Aldrich split the 2012-13 season with Houston and Sacramento, then signed with New York in 2013. A year ago, he signed as a free agent with the Clippers, and averaged 5.5 points, 4.8 rebounds and 1.1 blocks in 13.3 minutes a game. But even his one relatively effective season in L.A. got off to a bumpy start. Aldrich didn’t check in off the bench in 22 of the team’s first 27 games.

“It’s not easy,” Aldrich said in June of remaining patient while waiting for a legitimate chance to prove he belonged in the NBA. “It’s not. I just tried to see the big picture. The season is long, and you never know when somebody can twist an ankle or, whatever happens, somebody gets sick and somebody’s out for a few games. You’re gonna have to be ready to go in and produce.”

With Los Angeles, Aldrich saw a significant uptick in his minutes following a December quad injury to then-teammate Blake Griffin. The center parlayed the on-court production that followed into a deal with the Timberwolves.

As a teenager, Aldrich starred at Bloomington Jefferson High, roughly 20 minutes away from his new home NBA arena, the Target Center, in downtown Minneapolis.

Now 27, Aldrich, embarking on his seventh season, thinks the best years of his career are ahead of him. He told the Star Tribune playing for the organization he grew up watching will be special.

Although the Timberwolves haven’t reached the playoffs since Aldrich was a high school freshman, many around the league see the team on the verge of something special, with a pair of young stars in the making — Karl-Anthony Towns and former KU wing Andrew Wiggins — and a new head coach, Tom Thibodeau.

At this juncture, Aldrich projects as a backup big for Minnesota. The Star Tribune reported he’ll likely share minutes inside with Towns and Gorgui Dieng.

Last season, according to basketball-reference.com, Aldrich earned $1.1 million with the Clippers before opting out of his contract to test the open market. He’s set to bring in nearly seven times that much this coming season.

Previously, the burly pivot’s biggest paydays came in the third season of his rookie deal, which paid him $2.4 million for the year. The following season, he made $981,084 with the Knicks.

This summer, the NBA’s salary cap jumped up by roughly $24 million, meaning each franchise has more money to spend than ever before. Players such as Aldrich are reaping the benefits. 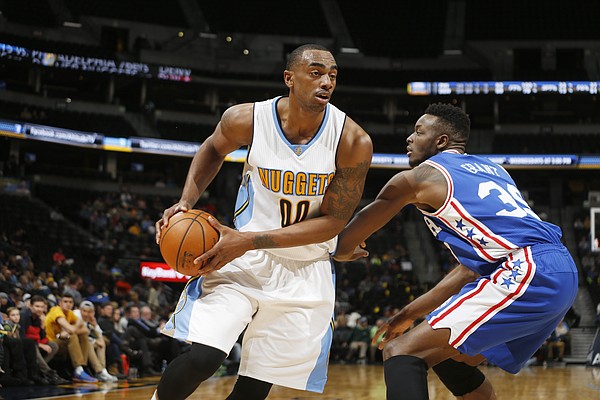 Denver Nuggets forward Darrell Arthur (00), left, drives for a basket past Philadelphia 76ers forward Jerami Grant (39) in the second half of an NBA basketball game Wednesday, March 23, 2016, in Denver. The Nuggets won 104-103 on Mudiay's three-point shot as time ran out in the half. (AP Photo/David Zalubowski)

Aldrich was the second former Kansas star to cash in on this summer’s league-wide spending spree. Seventh-year forward Darrell Arthur, who won a national championship at KU with Aldrich in 2008, agreed to terms with Denver — electing to stick with the team that he played for the previous three seasons.

The Denver Post reported Arthur’s contract, which like all free-agent deals can’t become official before July 7, will be worth $23 million over three seasons.

While Washington and other franchises showed interest in Arthur, who averaged 7.5 points and 4.2 rebounds during the 2015-16 season, The Post reported the Nuggets made him a priority in their free agency plans.

Arthur must enjoy his situation with the Nuggets, because even though his salary increased from $2.8 million last year to $7.6 million this coming season, The Post reported Arthur might have been able to pull in closer to $10 million a year with another organization.

The 28-year-old forward who began his career with Memphis, made a personal best $3.4 million with Denver during the 2014-15 season. He’ll more than double that figure next season.

Good news for some good guys. Neither one let pure greed rule their decision. Darrell seems quite settled in Denver and Cole has to love the idea of being brought back to his home area.

Great day for two great Jayhawks! The drinker on them!

Seconds into Wiggin's time at KU, Aldrich received his first glimpse of Wiggin's game with a thundering dunk. Now the two will plenty of opportunities to re-enact that encounter.

The NBA sure pays their players well. You'd think these kids will wake up someday to better prepare for a career rather than a season or two in the DL making about $150 k per season.

Great story about Black re-signing with the Lakers for two years and +$12MM. Not bad for going undrafted !http://sports.yahoo.com/news/sources--tarik-black-to-re-sign-with-lakers-063525946.html

Darrell is going to more than double his best year, isn't he? I mean, I only took LHS math under Ray Wilbur, but 3.4 million to 7.6 million seems like an increase of 123% or so. Perhaps the LJW was quoting the Denver post in that mis-statement?

123% is more than double, which makes the statement accurate.

it's true. the contracts have gone from ridiculous to ridiculouser....