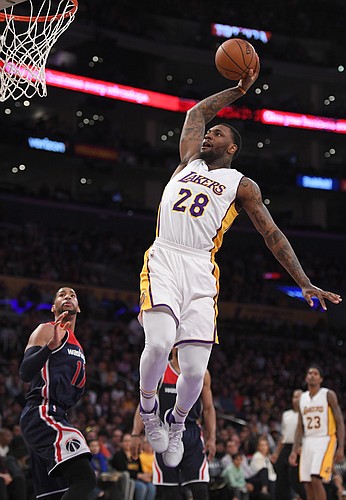 Many NBA players would look back at a six-month-long season that included merely 104 shot attempts with contempt. Tarik Black isn’t wired that way, though.

During the young center’s second season with the Los Angeles Lakers, he only played in 39 games, logging just 12.7 minutes off the bench in those sparse appearances. But the former Kansas big man, who this summer agreed to a two-year deal to stay with L.A., thinks his trials should only help him.

Under former Lakers coach Byron Scott, Black saw his playing time with L.A. drop by about 9.0 minutes a game from the 21.7 he averaged as a rookie. Of course, his productivity took a hit, too. Black’s scoring with the Lakers went from 7.2 points a game in 2014-15 to 3.4 this past season, while his rebounding numbers dipped from 6.3 an outing to 4.0.

Still, Black prefers to plow ahead in his career with a minutes-half-full approach.

“It taught me so much and prepared me to be the player I’m going to be moving forward,” Black said. “I definitely learned patience and perseverance. It’s tough mentally to still work hard in all situations. Throughout the season, I continued to work and always stayed competitive when I got on the floor.”

What else would you expect from a guy who drove from L.A. to Las Vegas earlier this week just to support his young Lakers teammates at the NBA’s Summer League.

Black’s character and work ethic figure to serve him well as the Lakers try to change course, under new coach Luke Walton. When Black, a 6-foot-9 big, reached a deal to stay with the Lakers, an increased role next season seemed implied. At the very least, the 24-year-old backup has a pretty good idea of what he’s getting into with the new regime.

As Black told the Daily News, he already had a good relationship with Walton, from their days together with the Memphis Tigers. Walton served as an assistant one season during Black’s time there, before the sturdy post player transferred to KU. In fact, Black said he has kept in touch with Walton since.

That relationship had to help Black feel great about his chances moving forward. And it had to make it easier to have an honest conversation with his new head coach. The Daily News reported Black spoke candidly with Walton about his role for the upcoming season.

“‘I respect that, appreciate that and will honor that,’” Black shared.

Of course, none of that means you’ll suddenly see Black playing 30 minutes a game for the rebuilding Lakers, who just went 17-65. There will be competition for frontcourt minutes, with newly acquired projected starting center Timofey Mosgov, as well as young forwards Julius Randle and Larry Nance Jr.

Not that any obstacles would faze Black.

“I see a world of potential for myself,” he said. “I can’t wait to get back in the gym and get back to work. It’s going to be a whole lot of fun.”

Though he was on the team one year, he left a fantastic impression on me. I wish Coach Self could have had him for multiple seasons. He was a tremendous person and I hope for the best for him no matter the road he travels.