Andrew Wiggins: Young T'wolves will be 'a nightmare to play' 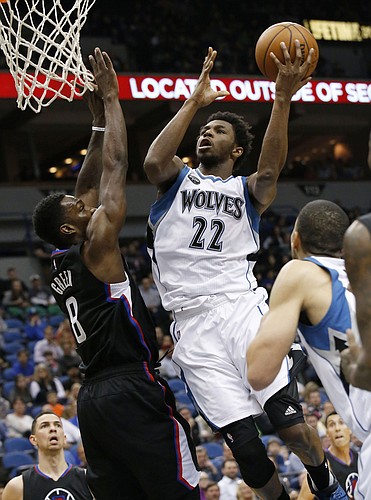 Minnesota Timberwolves guard Andrew Wiggins (22) goes up for a shot against Los Angeles Clippers forward Jeff Green (8) during the first half of an NBA basketball game in Minneapolis, Wednesday, March 30, 2016. (AP Photo/Ann Heisenfelt)

A regular at the draft lottery for more than a decade, Minnesota might finally be on the brink of NBA relevance again. Just ask one of the franchise’s young faces, 21-year-old forward Andrew Wiggins.

Since the dynamic wing left Kansas early and became the No. 1 pick in the 2014 draft, Wiggins trudged through a 16-66 campaign before experiencing a 29-53 season. But he doesn’t expect Year No. 3 to be so unbearable.

In an interview with NBA TV while attending the Las Vegas Summer League, Wiggins detailed how the team’s identity is in the midst of an overhaul.

Many around the NBA expect the Timberwolves to be one of the breakout teams of the 2016-17 season. That optimism for a team that hasn’t reached the playoffs since 2004 began to swell when Minnesota brought on former Chicago head coach Tom Thibodeau as its new president and coach. With the fiery, defensive-minded Thibodeau pushing his young stars to new heights, the thinking goes, Wiggins and reigning Rookie of the Year Karl-Anthony Towns are poised to make a significant leap, and bring the rest of the team with them.

Wiggins isn’t making any bold proclamations or guaranteeing a playoff berth for the T’wolves in 2017. His first two years in the league have taught him just how difficult it is to compete night after night. Plus, he learned not to weigh himself down with the disappointment of all those losses.

“We’ve just got to trust in the process. Nothing was built, nothing was set in one day. It’s a process,” Wiggins told NBA TV. “And every day, with some new additions and players coming back, we’re gonna be even better this year. New coaching staff, we’re probably gonna have a different kind of style of play. It should be a good year for us.”

.@22wiggins says @Timberwolves 'will be a nightmare to play' next season. Agree?

Since Thibodeau took over as the new boss this offseason, Wiggins said the team has shown interest in everything the players do, whether that’s with the organization or on their own time. He took that level of involvement as a sign the new regime wants its players constantly evolving during the offseason.

As for Wiggins’ personal growth as a player, he’s honing in on his defense.

“… Especially with a new coach coming in, Thibs, he’s gonna really push defense and playing hard and all of that,” Wiggins said. “We’re all looking forward to it, especially with the new addition, Kris Dunn (Minnesota’s No. 5 overall pick in the draft). He’s a great player, as you can see the last couple of games (in Las Vegas) he’s played. And defensively he’s great, too, so he’s gonna help us with a big push.”

In Minnesota next season, Wiggins will have a couple of new teammates who happen to be former KU players, too, in Cole Aldrich and Brandon Rush, both of whom signed with the T’wovles in free agency. Before too long, Wiggins might be asked to keep all of the Wolves, including his elder Jayhawks, in line. Those are the sorts of responsibilities that come with being one of the faces of the franchise. And Wiggins said he isn’t quite as soft-spoken as he used to be.

“It comes with growth, with experience. I’m going on my third year now, so I have a lot more responsibility than I did before,” said Wiggins, who averaged 20.7 points and 3.6 rebounds in his second season. “I’m becoming more vocal, becoming more of a leader.”

“It comes with growth, with experience. I’m going on my third year now, so I have a lot more responsibility than I did before,”

Wiggs seems to be dealing just fine with the maturation process and K-A.T keeps the tradition building. The new PG, Dunn, may not be a third All Star, but I look for another jump of ten to twenty in the W-L numbers. Cole and B.Rush certainly help to solidify bench strength for years to come, cutting down on the late-game fades we saw cost too many losses.

I thought they had four Jayhawks on the team?