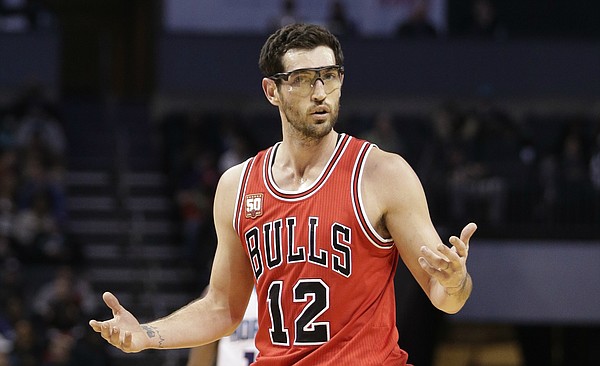 Chicago Bulls' Kirk Hinrich (12) reacts to being called for a foul against the Charlotte Hornets in the second half of an NBA basketball game in Charlotte, N.C., Monday, Feb. 8, 2016. The Hornets won 108-91. (AP Photo/Chuck Burton)

Of all the names swirling in the social media-driven rumor winds leading up to Thursday’s NBA trade deadline, Kirk Hinrich wasn’t one generating any buzz.

Now in his 13th season out of Kansas, Hinrich isn’t exactly a hot commodity. But even the least recognizable names in the league show up during the height of trade season. And the basketball Twitterverse kept pounding out supposed deals and ideas for swaps without Hinrich’s name appearing anywhere prominent.

Yet when the deadline arrived without much hoopla, due to no star movement, a minor and unexpected exchange emerged, coming in right under the wire. Chicago traded Hinrich, in the middle of his 11th season of service with the Bulls, to Atlanta.

Hinrich, who also played for two other franchises — including the Hawks — between stints with Chicago, has contributed much to the Bulls. Obviously, he’s not exactly Michael Jordan or Scottie Pippen, but Hinrich will probably go down as one of the better long-term role players in the franchise’s history, because, well, in some categories only Jordan and Pippen rank ahead of him.

- third in games played (748), behind Jordan and Pippen

At the Bulls’ website, Sam Smith wrote of Hinrich’s impact on the franchise, praising the 6-foot-4 guard’s toughness and relentlessness, among other attributes.

As you might expect, Hinrich in turn had nothing but good will for the Bulls on his way out of town.

Kirk Hinrich traded to Atlanta: "I feel fortunate to have come to Chicago and have played a long time here. It will always be a part of me."

None by Sam Smith

“I was surprised,” Hinrich told reporters after being traded. “But after it sinking in after a few hours, I realize it’s a chance to move forward and an opportunity to be with a really good team. I feel fortunate to have come to Chicago and have played a long time here. It will always be a part of me.”

When Hinrich’s basketball career ends, he’ll likely be remembered first as a standout at Kansas and secondly as a valuable player for the Bulls.

“I’ve tried to base everything on winning,” Hinrich said of his time with Chicago. “Obviously haven’t had a championship. But that’s part of it. I’ve had good mentors. I grew up a big Bulls fan. To be drafted here and play most of my career here is such a blessing.”

Hinrich played a career-low 15.9 minutes a game for Chicago this season, but that didn’t mean coach Fred Hoiberg didn’t value him.

“Great teammate, a guy who has done a lot of wonderful things for this franchise,” Hoiberg said of Hinrich. “He’ll be missed. He did a lot of things for us, but at the same time we understand it is a business. Kirk always brought a level of toughness. He’s a very good on ball defender, always was in the right spot.”

It’s safe to assume Hinrich will take on a similar veteran role with Atlanta. As mentioned earlier, this won’t be the first time Hinrich laced up his basketball shoes and slipped on his goggles in a Hawks uniform. 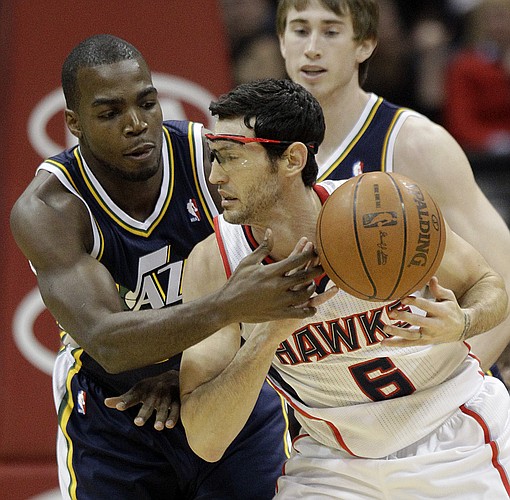 The Hawks, essentially traded away one end-of-the-bench point guard in Shelvin Mack for another more experienced one in Hinrich. (They traded Mack to Utah and also moved Justin Holiday to Chicago in the three-team deal.)

With starting point guard Jeff Teague and backup Dennis Schroder firmly established in the backcourt, Hinrich won’t play ahead of either of them.

But it’s feasible that coach Mike Budenholzer could turn to Hinrich at times off the bench when he wants a veteran on the floor instead of backup guard Tim Hardaway Jr., to pair with Teague or Schroder.

Regardless of what his role turns out to be, Atlanta (31-24, fourth in the Eastern Conference) knows what it is getting: a trustworthy veteran and a professional.

This is a head scratcher all the way around from what I can see here, but maybe that just shows how little I know about the NBA and these teams.

Nah. You're right. It's a very odd trade.