Markieff Morris finally gets his wish: a trade out of Phoenix 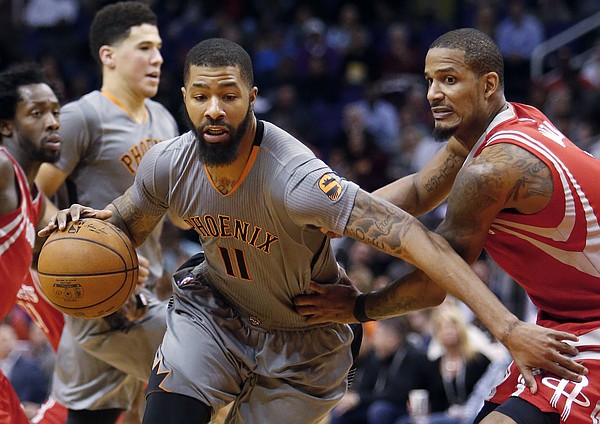 Just as everyone figured, the NBA’s trade deadline did not pass Thursday afternoon without Phoenix shipping away disgruntled forward Markieff Morris.

The former Kansas star, who wore out his welcome with the Suns after the organization traded away his twin brother Marcus, got dealt East, to Washington, according to a report from Yahoo.

The Suns traded Markieff Morris to the Wizards for a protected 2016 first-round draft pick. It is protected Nos. 1-9.

As detailed in the Yahoo report from Shams Charania, Morris has wanted out of Phoenix all season, and the Suns finally gave up on the talented 26-year-old stretch forward after the low lights of his season included throwing a towel at then-coach Jeff Hornacek and fighting with teammate Archie Goodwin during a timeout.

Azcentral.com’s Paul Coro was on the scene Thursday afternoon when Morris left the Suns’ facility, reporting the new Wizard was “ready to move on.”

Markieff Morris' last interview exiting Phoenix was by hoverboard. On the Suns trading him: "Just ready to move on. My time here was great."

The Suns were probably like: “Don’t let the door hit you on the way out, or trip off your hoverboard thing in the parking lot.”

Morris lands in Washington at least with a chance to contribute to a playoff team, which wasn’t going to happen in Phoenix (14-40). Although the Wizards (23-28) haven’t lived up to expectations this season, D.C. is just 3 games out of the eighth and final playoff spot in the Eastern Conference with 31 games to play. Plus, the East is so jumbled, with the exception of clear-cut favorite Cleveland, that Washington, at 10th, is only 7 games back of third.

While Morris’ season numbers for 2015-16 — 11.6 points, 5.2 rebounds, 39.7% shooting — don’t jump off the screen at you, much of that has to do with his volatile relationship with Hornacek. After the Suns got rid of their head coach, Morris received more of an opportunity in his final games with Phoenix. In February, Morris played 34.8 minutes a game, compared to 22.8 in January and 18.5 in December.

For interim Suns coach Earl Watson, Morris averaged 20.8 points, 7.6 rebounds, 4.6 assists, 1.4 blocks and 1.0 steals in five losses. He shot 44.8% from the floor and made 4 of his 12 3-pointers while essentially reminding other franchises that they should make a move to get him out of town.

Washington could use that kind of production in its front court, where coach Randy Wittman could easily start Morris at power forward or use him as a sixth man.

With Morris’ trade, Washington now turns into a more appealing team to watch for KU fans who follow the NBA. Morris joins veteran Drew Gooden and rookie Kelly Oubre Jr. as Jayhawks on the roster — though Wittman will surely ask much more of his new forward than those two.

The 34-year-old Gooden doesn’t play that much anymore: 12.4 minutes this season, with 3.2 points and 3.4 rebounds, deep off Washington’s bench.

Washington could be a good fit for him. Hopefully he can get his act together now.