Marcus Morris ready to put up fight vs. LeBron James and Cavs

A starting forward for Detroit, Morris came out firing in his first professional postseason game, scoring 20 points in a loss to the Eastern Conference’s top seed, Cleveland. And although Morris only managed 11 points in another Pistons loss Wednesday night, he made a statement of sorts by not backing down from one of the best players in league history.

By the time Cleveland secured a 2-0 lead in the best-of-seven series, a clip of LeBron James from Game 2 started making the rounds on Twitter. James, holding his ribs after Morris banged into him down low during the fourth quarter, had some choice words for the Pistons forward.

According to social media lip-reading experts, James could be seen saying of Morris: “I’m gonna [expletive] that [expletive] up.” 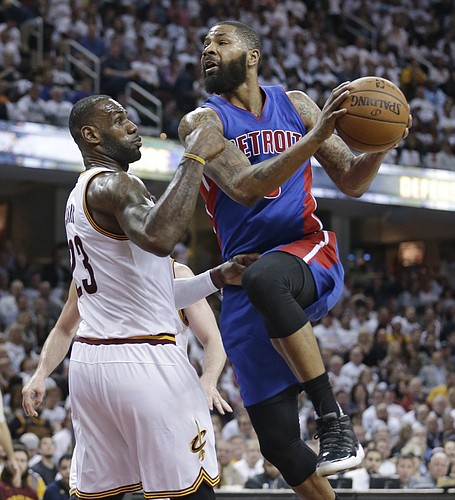 “I know for a fact he wasn’t talking to me,” Morris said in a report from the Detroit Free Press. “You can quote me on that.”

That wasn’t the only time King James took umbrage with Morris, either. At one point, James gave Morris a dirty look, apparently feeling disrespected by Morris’ decision to leave one of the NBA’s greatest players so open for a 3-pointer.

None by NBA SKITS

The eighth-seeded Pistons have a long way to go to turn this into a series, but if they find a way to win a game or two in Detroit don’t be surprised if Morris plays a key role in making that happen.

As ESPN’s NBA expert Zach Lowe said this week on his podcast: “Marcus Morris has been like a flaming volcano for about six weeks.”

That might be going a bit overboard, but Morris did put up some impressive numbers against playoff teams down the home stretch of the season, as Detroit secured the final available postseason berth in the East.

After exploding for 19 points in the first half of Game 1 against Cleveland, Morris has cooled off on offense, putting up just 12 total points in the past six quarters of the series. He shot 2-for-10 in Game 2, making just 1 of 5 from downtown.

The Pistons will need Morris to rediscover his scoring touch in the games ahead to keep Detroit alive.

Lucky for them, Morris has the type of personality to remain confident, play with fire and not back down from the NBA’s king. The series continues Friday and Sunday, in Detroit.

Look I want the guy to be successful, I just get tired of seeing the whiny attitudes of the Morris twins sometimes. Just leave it out on the court...good luck.

Unlike Kieff, Marcus has elevated his game and seems to have grown up (stopped whining/barking and let his game talk). I wish them both good luck but it seems to me that Marcus is making his own luck with hard work.

I cheer for any Kansas player as the next, but this idea that they are getting at LeBron James is just plain stupid. I mean you can defend Morris all you want, and say he doesn't back down, but he was awful in Game 2, and if you learned over LeBron playoff career, these names that come at him fade over time. Morris is not on any level James is or ever will be.

This is just an article from a Kansas Jayhawk fan perspective that is just lame. They are not beating LeBron James and he will dominate like he normally does.

Write something else please.