Cole Aldrich emerges as key contributor for Clippers in playoffs

When the Los Angeles Clippers signed Cole Aldrich in free agency last summer, the move didn’t exactly generate buzz in the NBA, or even among the Clippers’ fan base.

Even when the regular season began this past fall, the non-response seemed appropriate, as Aldrich, a former standout center at Kansas, barely played at all.

Yet, here we are in the first round of the Western Conference Playoffs, and the 6-foot-11 reserve has morphed into a critical contributor for the Clippers, who now have a 2-0 series lead against Portland.

According to teammate Blake Griffin, Aldrich’s relentless work ethic turned him into an important cog in L.A.’s rotation.

“He’d be the first guy in here,” Griffin told Rowan Cavner for the Clippers’ website. “Doc (Rivers) challenged him to get into better shape, and he accepted it and it paid off.” 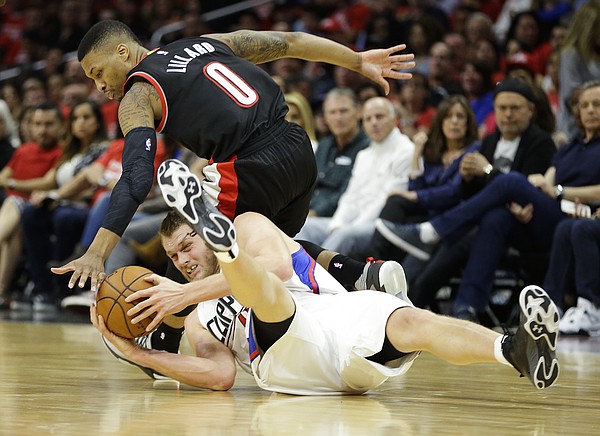 Early in the season, Aldrich didn’t play in 23 of L.A.’s first 27 games, but he consistently showed up to the Clippers’ practice facility more than two hours early to run on the treadmill, lift weights and work on his game.

“That was just kind of my thing,” Aldrich told the Clippers’ website. “When I was going through that period of time and I wasn’t playing, it was just knowing at some point in time it was going to happen. I had to be in shape and be ready and kind of run with the opportunity.”

According to Aldrich, he has lost 25 pounds since the beginning of his sixth NBA season. That has transformed him into a much more agile defender and finisher in the paint. Wednesday night, in L.A.’s victory over Portland, Aldrich scored 8 points, grabbed 8 boards and blocked 2 shots in just 12 minutes of action.

“Maybe we should write down the Cole diet,” Clippers head coach and president of basketball operations Doc Rivers said, “because I don’t know what he did. But, he really worked his butt off.”

In Aldrich’s limited minutes he helps the Clippers get defensive stops. According to basketball-reference.com, Aldrich is securing 31.4% of available defensive rebounds and blocking 9% of Portland’s shot attempts when he is on the court.

“He’s blocking everything that comes in the paint,” said DeAndre Jordan, L.A.’s starting big man. “He’s gobbling up every rebound, he’s running, he’s dunking now, which is nice to see. He definitely helped our second unit out a lot.”

Aldrich, far from ever being mistaken for the most athletic player on the floor, has even been described as “clumsy” in a feature by Shaun Powell for NBA.com.

Still, his progress and small contributions can’t be ignored.

"He's been outstanding for us, really all season, doing everything asked of him," Rivers told NBA.com.

Just before the playoffs began, Aldrich turned out his best stretch of the season, averaging 9.4 points, 8.6 rebounds, 1.6 blocks and 1.6 steals in 19.4 minutes off the bench, while converting on 75% of his field-goal attempts.

In the midst of the Clippers winning six of their final seven games, Aldrich started at Utah, played 40 minutes and went for 21 points and 18 boards in a road win.

"This has been great for me and hopefully great for the team," Aldrich told NBA.com of his recent success. "My teammates have been very supportive and shown a lot of confidence in me, and I think that's played a huge part in how this season has turned out."

One of the most demanding players in the league, Clippers point guard Chris Paul appreciates what the 27-year-old veteran has brought to the team, as it tries to advance through the playoffs.

“I think Cole is a lot better than a lot of people realize,” Paul told the Clippers’ website.

Good to hear. He's the kind of young man I like to see succeed.

Awesome to see Cole doing well - a guy who put the "student" in "student athlete." Cole Aldrich, Jacque Vaughn, and Perry Ellis are all in that category.

Even though he left early he did come back and earn his degree. I remember him walking down the hill to receive his diploma.

Love to see success come from hard work and determination. Keep it up, Cole. Jayhawk Nation is cheering for you.

Nice to see Cole turning the corner in the NBA.

Cole has got some wicked old man game! Gonna give him a good career.