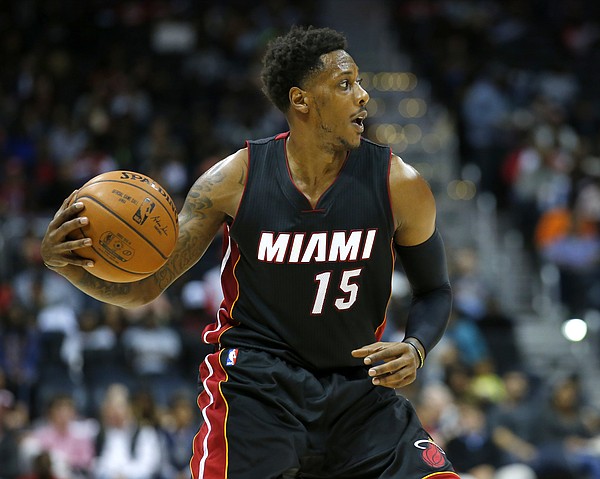 Miami Heat guard Mario Chalmers (15) looks to pass in the second half of a preseason NBA basketball game against the Atlanta Hawks on Sunday, Oct. 18, 2015, in Atlanta. The Heat won the game 101-92. (AP Photo/Todd Kirkland)

For the first time in his seven-year NBA career, Mario Chalmers spent this past spring watching the playoffs from afar, instead of playing on the national stage. LeBron James’ departure from the Miami Heat and some key injuries meant Chalmers had to adjust from his perceived norm.

Year No. 8 will bring another significant modification for the former Kansas standout. A starter in 74% of his 519 career games with the only organization he has ever played for, Chalmers now finds himself as a designated bench player in Miami.

Erik Spoelstra says Mario Chalmers will be used as a back-up point guard to Goran Dragic, not a combo guard like last year.

None by Jason Lieser

It wasn’t that long ago that Chalmers started at point guard in four straight NBA Finals appearances for the Heat. During the summer months of 2015, though, he became the subject of trade rumors. Now that Miami has starting point guard Goran Dragic signed long-term, the Heat just don’t need to rely on Chalmers as much.

“That’s just me,” Chalmers said. “I’m the type of guy who’s willing to do whatever it takes for the team. I’ve always been thrown into different situations and been able to handle it.”

Likely easing his transition is the fact that Miami’s bench could turn out to be one of the best, most offensively effective second units in The Association. Chalmers’ cast of backups includes Amar’e Stoudemire, Josh McRoberts, rookie Justise Winslow and Gerald Green.

“We’ve got ball movers on our second unit and right now we’re really putting it together,” Chalmers told the Palm Beach Post. “Gerald’s our gunner, so we expect him to take those shots. Me and J-Mac are the ball movers and spot-up shooters, then you’ve got Justise as a slasher and you’ve got S.T.A.T. who can do the post work. We’ve got good balance.”

Add that group to a starting five of Dragic, Chris Bosh, Dwyane Wade, Luol Deng and Hassan Whiteside, and most around the NBA expect Miami to not only get back to the playoffs in 2016, but finish near the top of the Eastern Conference, with James’ Cleveland Cavaliers.

When talks of a trade out of Miami began to stress Chalmers out at times in the offseason, he told the Miami Herald he reached out to his former teammate and current savior of Cleveland, James.

Now over all of that and headed into the regular season knowing his role, Heat coach Erik Spoelstra told the Miami Herald this season should be easier for Chalmers than last year, when the Heat experimented with using him in different capacities.

“Clarity always breeds confidence. Hopefully, Rio will wrap his mind and arms around the clarity,” Spoelstra said. “I care about Rio. We’ve been through so much as a rookie player, a rookie head coach to now we’re both veterans. I’m excited about him embracing this new role. I’m open to changing for more, better, wherever it could possibly go.”

So while his minutes (29.6 last year) and raw per game averages should take a dip, Chalmers could still have a real impact for one of the stronger teams in the East, by running the show and keeping the Heat competitive when Miami needs to give its starters a rest.

“Having this second group is a luxury,” Bosh told the Palm Beach Post. “Thank God for them.”