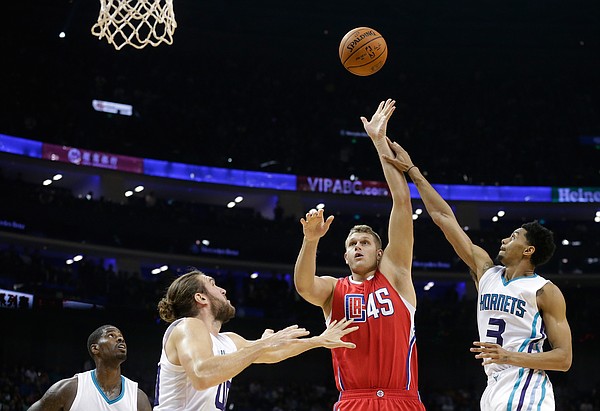 Hey, is that Cole Aldrich not wearing a New York Knicks uniform?

The basketball gods smiled upon the former Kansas center this summer — or maybe it was just that Aldrich became a free agent and made a wise decision. Either way, the 6-foot-11 center now can proudly call himself a member of the Los Angeles Clippers.

Built around all-stars Chris Paul and Blake Griffin, the Clippers went 56-26 in 2014-15 and had the third-best record in the stacked Western Conference.

But it’s easy to see 26-year-old Aldrich, an old-school pivot, having some kind of impact for coach Doc Rivers’ team in a backup capacity. Aldrich is one of only three players on the entire roster taller than 6-foot-10 — the others being stars Griffin (listed at 6-10) and Jordan (6-11).

With the NBA trending toward smaller, less traditional lineups, Rivers doesn’t have to play Aldrich a lot — and he most likely won’t. But when the Clippers need a center or rim-protector type on the floor and Jordan is hurt or in foul trouble or, you know, missing too many free throws (he shot 39.7% at the foul line last season), Aldrich figures to be the Clippers’ guy.

Aldrich only averaged 16.0 minutes a game in New York a season ago, and contributed 5.5 points, 5.5 rebounds and 1.1 blocks. Even if his minutes with L.A. are similar, it wouldn’t be surprising to see an uptick in Aldrich’s production. He’ll be the last player on the floor opponents will worry about, with the talent on the Clippers’ roster. The Knicks’ only star was Carmelo Anthony, and he missed most of last season due to injury.

And with the kind of shots Aldrich takes — almost exclusively of the high-percentage variety — he should be able to cash in when defenses help away, to focus on the more talented Clippers on the floor. 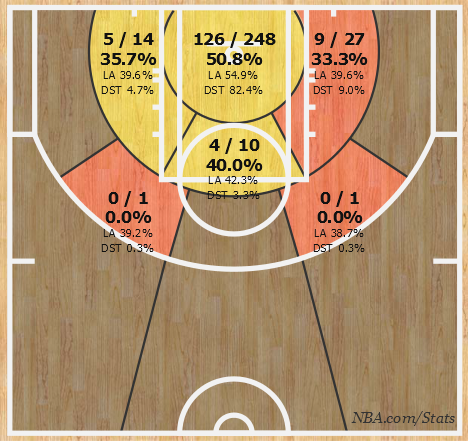 Look at that shot chart (note LA = league average). Almost 83% of the center’s field goal attempts came right around the basket, in the paint, in 2014-15. On the rare occasions he’s on the floor at the same time as point guard Paul, he’ll find scoring will come even easier in the paint.

We don’t yet know exactly how much Rivers will use Aldrich on what looks to be one of the league’s top teams. A mild left ankle injury has limited the big man’s availability in the preseason.

One thing is for sure, though. Aldrich will get to enjoy playing for a winning team, capable of making a deep playoff run. He sure didn’t get to experience that in New York.

"liked"? did something happen to him? Just giving you a hard time. I've always liked him (and still do) as well.