By the end of Thursday night, Kansas one-and-done prospects Kelly Oubre Jr. and Cliff Alexander will know which NBA city they will call home. For now, they have one more long day of anticipation ahead of them.

A possible lottery pick, Oubre received an invitation to the NBA Draft’s green room for Thursday night’s festivities in Brooklyn, New York. He has his duds picked out and is ready to go after spending much of the last month-plus working out for numerous franchises.

Alexander, a projected lottery pick before he arrived at KU, likely won’t hear his name called until the second round. That doesn’t mean he’s any less excited.

Now that NBA Draft Eve has arrived, let’s take one last look at where Oubre and Alexander might end up, as they embark on their professional careers. 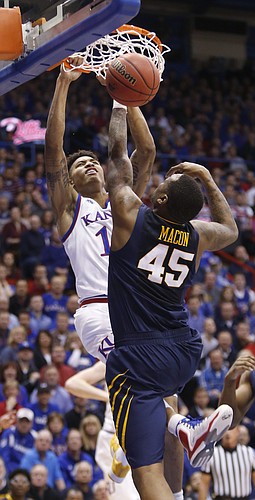 Kansas guard Kelly Oubre, Jr. (12) puts down a dunk in the first half of the Jayhawks game against the West Virginia Mountaineers Tuesday, March 4, 2015 at Allen Fieldhouse.

Stock assessment: Slipping. Just a couple weeks ago, Oubre’s average position fell in the late lottery, around No. 13. Since then, the small forward’s name is appearing later and later on mock drafts and big boards.

Of course, positives and negatives come with this development. There is the matter of money: the later Oubre gets picked, the less he’ll get on his rookie deal. However, because he isn’t going early in the draft, the young swingman has a chance to land on a decent-to-very-good team.

Take a look at the organizations predicted to take Oubre. Even the ones that reside in the lottery are great situations: Oklahoma City (14th), Miami (10th) and Phoenix (13th).

Really, the better the team that takes Oubre the better it will be for his NBA career, short-term and longterm. If the 19-year-old lands with an organization such as Oklahoma City or Chicago, he’ll find himself immediately on a championship-caliber roster. He might not factor into the rotation right off the bat with the Thunder or Bulls. But if those teams are healthy all season and routinely blowing out lesser opponents, Oubre will get his chances to play as a rookie. More importantly, he’ll learn in a winning environment, and practice with some of the league’s stars and key difference-makers, which could prove far more valuable than playing 30 minutes a night for a lousy team.

Atlanta could be the best of both worlds for Oubre. The Hawks had the best record in the Eastern Conference this past season, but they’re not loaded with depth at small forward — especially if DeMarre Carroll signs elsewhere as a free agent. Atlanta coach Mike Budenholzer learned from one of the best in the business, San Antonio’s Gregg Popovich. The Spurs are renowned for getting the most out of their role players and developing them to meet their full potential. “Coach Bud” could do just that with Oubre, and bring him along slowly in a winning culture. 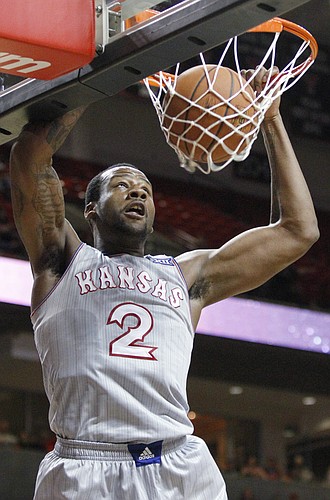 Kansas forward Cliff Alexander (2) dunks off a pass from Frank Mason III, in the second half of the Jayhawks 73-51 win over Texas Tech Tuesday, Feb. 10, 2015 at United Supermarkets Arena.

Stock assessment: Holding steady. Not all of the mock drafts floating around out there go as in-depth as others. But those that include Round 2 projections most often feature Alexander’s name in that range.

After a less than remarkable season at KU, Alexander looks like a project, for sure. But second-round picks don’t get guaranteed contracts, so teams don’t mind rolling the dice on players who have yet to prove they have any chance of sticking around in the NBA.

Longtime NBA writer Chris Sheridan said Alexander will be off the board within the first 10 picks of the second round.

Hearing Cliff Alexander has a promise from a team drafting in 30s in 2nd round. Suspension cost that kid a lot of $$$

None by Chris Sheridan

With two early second-round picks for both the Timberwolves and the Sixers, Alexander could find himself on the same team as one of his KU one-and-done predecessors, Andrew Wiggins or Joel Embiid.

Wherever Alexander goes, the organization won’t put any added pressure on him to produce immediately. It will be up to him to make a case for the team to keep him around.

If he’s lucky enough to land in Minnesota, the 19-year-old big man could could join the T’Wolves’ youth movement, in which Wiggins and likely No. 1 pick Karl-Anthony Towns will play the starring roles.

That scenario also would allow Alexander to learn from someone he would respect — even while getting showered with criticism. Kevin Garnett, who figures either to retire and join the Timberwolves in some off-the-court capacity or return for one more season, could build the youngster up by breaking him down. Alexander responded well to such tactics from Bill Self while at KU. And no offense to Self, but KG probably has way more street cred with a young power forward trying to find his way in the NBA.

Let's be real..... if Cliff would have been eligible next season, he more than likely would have come back. In fact, I think he probably was planning on staying as the season wound down and was forced to change course when his mom oooooooooops. I feel for the kid, but also am not sure he would have ever lived up to the hype. His body language always seemed lacking and his basketball IQ has often been mentioned to be low. Maybe another year would have fixed that, but we may not have gotten Diallo if he had stayed. Wish Cliff the best of luck and hope that he turns it around.