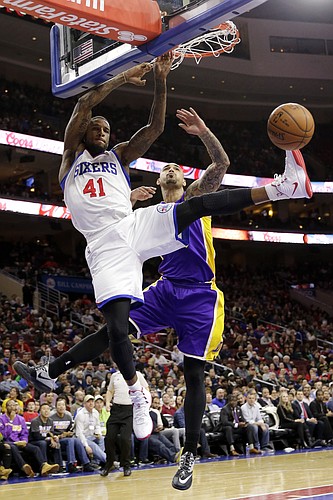 Thomas Robinson didn’t have to wait long to find his new NBA home for the 2015-16 season.

On the second day of free agency, the former Sacramento King, Houston Rocket, Portland Trail Blazer and Philadelphia 76er (who was waived by the Denver Nuggets without playing a game for them) agreed to a contract with the Brooklyn Nets.

All thanks to GOD and BROOKLYN NETS this time won't be the same I promise!

Rather than waiting to see which teams misfired on their home-run pitches to the big-name free agents, Robinson on Thursday went ahead and decided to stick with the franchise that already had shown interest in him. The Nets planned to sign Robinson once he cleared waivers in February, but Philadelphia claimed him before that became an option.

Considering how the first three seasons of his professional career have gone — never playing more than 15.1 minutes a game over the course of one of them — its easy to see why Robinson would jump at the chance to join an organization who has shown an inkling of belief in him.

The New York Post’s Tim Bontemps reported the addition of Robinson helps Brooklyn meet one of its offseason goals: to add younger, more athletic players. The Nets will sign the 24-year-old power forward to a two-year contract for the league minimum, and he has a player option to become a free agent again next summer.

There are months to go before the season actually begins, but at this point it appears Robinson will be a regular rotation player — likely even the first big off the bench to replace either Brook Lopez or Thaddeus Young.

Thomas Robinson could help the Nets, especially on a short two-year deal (second year player option) for about $2.2 million.

None by David Aldridge

Perhaps the most important development in all of this, though, is the nature of the contract. Brooklyn could have only been interested in a short-term deal, but that’s best for Robinson, too. This way, he can bet on himself.

In his eyes, he hasn’t yet received a legitimate shot to prove he belongs in the NBA. If he finally gains relevancy with the Nets, he can opt out of his deal next July and get more money from Brooklyn or another team.

Robinson took a step in the right direction during his short, 22-game stay with Philadelphia, averaging 8.8 points and 7.7 rebounds (2.8 offensive) in 18.5 minutes.

Some advanced stats from basketball-reference.com tell even more of the story. Robinson had a player efficiency rating of 19.3 with the Sixers, which was more than 4 points higher than he had posted with any other team. For a reference point, Miami’s Dwyane Wade had a PER of 21.4 for the season, which ranked 20th overall in the NBA.

While wearing a 76ers uniform, Robinson also set new personal marks in offensive rebound percentage (15.8%) and defensive rebound percentage (30.2%). Had either of those come over the course of the entire season, Robinson would have ranked third in ORB%, behind Andre Drummond (18.3%) and DeAndre Jordan (16.2%), and third in DRB%, behind Jordan (32.4%) and DeMarcus Cousins (30.6%).

The No. 5 overall pick in the 2012 NBA Draft, Robinson knows he has yet to live up to the expectations that come with that status. Next season in Brooklyn could change all of that, as long as he maintains that high-energy approach and keeps crashing the glass like a maniac.

As he tweeted out upon coming to terms with the Nets, Robinson thinks he’s finally on his way to earning respect around the league.

The right opportunity and the disrespects stops this year ! I promise these are all happy tweets lol #FOE

Congrats T-Rob! Pulling for you!

Interesting that Alexander will now be competing for a job with TRob, the guy we all have compared him with.

Nice edge. Balance of a good chip on shoulder and being a positive personality on bench, court and in the locker room. Go for it Thomas. Feed your hunger.

He played well while with Philly. Kinda surprised he didn't get inked. But, then again, Philly has drafted three top-3-pick big men the last three years. I'm convinced T-Rob can be a 10-and-8 guy in the right situation.