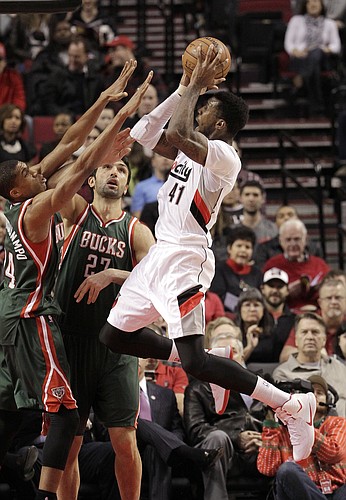 Stop me if you’ve heard this one.

Thomas Robinson will not play for the NBA team we thought he was going to play for.

Last week, headed into the trade deadline, the third-year power forward was a Portland Trail Blazer.

Then he got shipped to Denver on Thursday.

A few days later, Denver waived him on Sunday.

Reports on Monday indicated Brooklyn would sign Robinson. That scenario, though, assumed that no team would claim him off waivers.

Tuesday afternoon, Philadelphia threw a wrench in the plans. Had the 76ers not grabbed him, Robinson would be a member of the Nets by the end of the day. Instead, he’s off to Philly.

Yahoo’s Adrian Wojnarowski reported the Sixers made the move for salary cap purposes.

Sixers need to reach 90 percent of cap before season's end. Robinson's salary gets it there. If not, shortfall divided among rest of roster.

Philadelphia — you’ve probably heard — is kind of awful (12-44, 14th in the Eastern Conference). But that might be good news for Robinson. It’s hard to imagine a team where he’d have more of an opportunity to play and actually prove that he belongs in the league.

Robinson had averaged 3.6 points and 4.2 rebounds in just 12.2 minutes this season in Portland.

The Sixers' only big men of note are Nerlens Noel and recently acquired JaVale McGee.

Would-be rookie Joel Embiid is easing his way back to full health, and the 76ers have no reason to play him until the Summer League.

Now Robinson, the former Kansas standout, should have the rest of the season to showcase his explosiveness and rebounding.

And then he’ll be a free agent at the end of the year. And he can move on. Again.

So, to recap: after being drafted by Sacramento, traded to Houston, traded to Portland, traded to Denver and waived by Denver without ever playing a game. The 76ers will be Robinson’s fourth NBA team.

I would love that. Go T-Rob

'And then he’ll be a free agent at the end of the year. And he can move on. Again.'

Sounds like this may be a short term solution. Could be T-Robs last chance to prove he belongs.

Agreed. He hasnt developed a lot since he's gotten drafted. He's still the athletic freak, high end motor guy that we had at KU. Difference, the guys that are covering him now are too. Best of luck to him. Im sure part of the reason he's bounced around is most teams hope for a diamond in the rough. So far, he just seems rough.

Best of luck to him though. Hopefully he gets some PT now and will get a second contract.

It's good for TRob to the extent that he may get more of an opportunity to showcase himself in Philly than he possibly would have gotten in Brooklyn. But it's bad for TRob in the extent that the 76er's are not team that is building for the future by aquiring players that they intend to keep so much as they are aquiring assets that they see more as a means to an end than as and end in themselves.

Brooklyn currently has Brook Lopez, Mason Plumlee, and Thad Young. Not sure who else. Philly currently has Noel and McGee. So he should get some PT there. Time go get to work for TRob. He should get a contract this summer, but a strong finish to the season could be the difference between a $10 million deal over multiple years or a one year deal making his minimum salary.

It's too bad TRob didn't last in Portland, because he seemed to be a good fit there when he actually was allowed to play. He seemed to like being there. I wouldn't be shocked to see him signed back up with Portland on a free agent deal this summer, since the trade that they had made with Denver was for Afflalo and and not for Wilson Chandler.

I think this is mostly good in that he'll get a chance to pad his stats, get playing time, and show what he can do. Which, honestly, probably wouldn't happen with a contending team. He probably won't be there long, but it could be a nice audition for the next team.