Nick Collison owes much of NBA longevity to time at KU 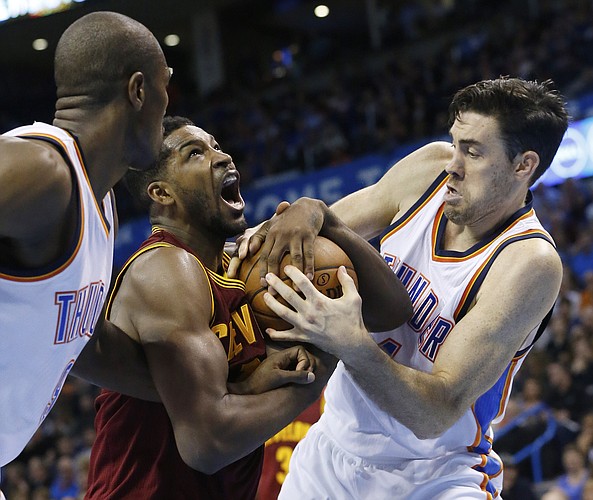 In the midst of his 11th season in the NBA, Nick Collison gives much of the credit for his ability to stick around and contribute for so long to growing up around the game and his time as a Kansas Jayhawk.

Collison recently spoke about his pre-professional days in a video feature produced by the only organization he has ever played for in The Association: the Oklahoma City Thunder (formerly the Seattle Super Sonics).

The video features footage from his prep days, including a pretty incredible interview with a very young-looking Collison, and, of course, highlights from his four years in crimson and blue.

Now a 6-foot-10, 255-pound veteran, Collison lived and breathed basketball growing up in Iowa, where his father, Dave, coached in the high school ranks.

“My last couple years of high school, I knew I was going to be able to play in college, and wanted to play in the NBA,” Collison shares, “so I think that’s when I really started taking it serious as a possible career.”

For more insight on his days at Kansas, the Thunder even track down the power forward’s KU coach, Roy Williams, now at North Carolina.

“First time I ever saw Nick Collison in a high school game was winning a state championship,” Williams says of the Iowa Falls native. “I though, ‘My gosh, what a complete player, what a competitive guy, what a leader out there on the court.’ I was just absolutely blown away.”

Collison went on to start in the 1999 McDonald’s All-American Game — played at Iowa State’s Hilton Coliseum, in his home state — for the West team, with Carlos Boozer, Jonathan Bender, Mike Dunleavy Jr., and Brett Nelson.

Why did he choose KU, instead of playing at Iowa or Iowa State, or someplace else?

“I realized that that would just be an incredible place for me to play, and Coach Williams would be a great coach to play for, and I started to look at it more of like, ‘How do I fit in ?’ and it just seemed like the best fit for me.” 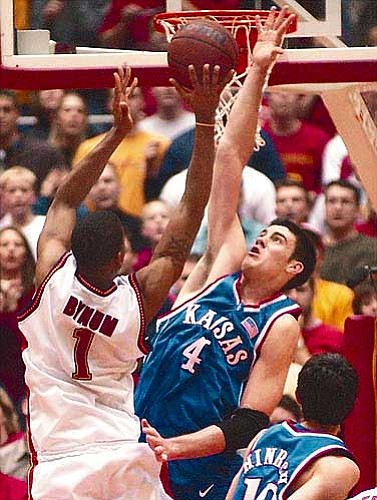 Collison says the aspects of his game he perfected at KU gave him an advantage over other role players once he got to the league, and allowed him to become the player he is.

“Everybody at this level is a great player and great athlete, but I’ve been able to stick around because my habits have been good and I’ve been able to be in the right place at the right time. And I owe a lot of that to Coach Williams and his staff.”

The former Kansas coach recalls how Collison led by his actions when he called Lawrence home. Williams marvels that the hard-working forward drew charges, sprinted back to play defense and dove on the floor without coaches asking him to do so.

“I don’t think I ever raised my voice at Nick Collison for four years. He made me a heck of a lot better coach. Won a lot of games because of his toughness, his competitiveness, his will to win.”

“He was such a good learner. He was a student of the game, and you explain things to him one time and showed it to him and he pretty much had it.”

Collison doesn’t play (16.1 minutes a game this season) or produce (3.9 points and 3.5 rebounds through 40 games) as much as he once did now that his career is winding down. But he says he always had a respect for the game and what it takes to play in the NBA.

“For me, that’s what really drives me. Knowing how fortunate I am to be at this level and how few people can get here.”

What’s more, Collison says he still knows this basketball thing is just a small part of the rest of his life

Check out the entire video from the Thunder:

Just saw that Collison got a 2 year extension worth $7.5MM all guaranteed.

It's cool to see him get recognized by his team and his organization in this way, and a very complimentary column by ESPN about it, too.