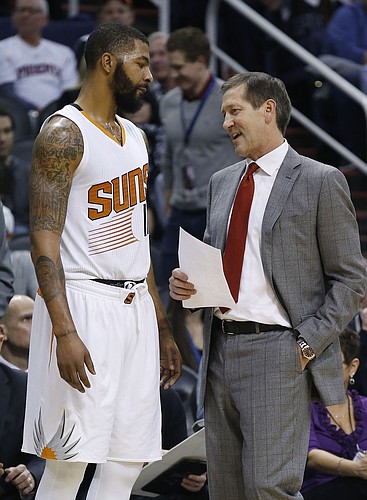 It doesn’t look like Markieff Morris and Phoenix coach Jeff Hornacek will be exchanging Christmas cards this year.

Upset Wednesday night when his coach subbed him out of the game in the fourth quarter of what would become another Suns loss, Morris threw a towel toward Hornacek while yelling at him, according to the Arizona Republic’s Paul Coro. Hornacek then picked up the towel and threw it back in the direction of Morris with a counter of “his own upset words.”

A former star at Kansas, Morris has fallen out of favor with Phoenix’s coach of late, playing far fewer minted than expected after a breakthrough season a year ago (career highs of 15.3 points per game, 6.2 rebounds, 2.3 assists, 31.5 minutes, 82 starts).

Morris logged just 12 minutes in the loss to Denver that now may mark the tipping point in what already had become a soured relationship between the 6-foot-10 forward and the organization that drafted him.

Morris first became disgruntled with the Suns organization this past summer, when the team traded his twin brother Marcus to Detroit unexpectedly. He publicly said he wanted Phoenix to trade him, too, as a result and the more the season goes on the more inevitable that endgame seems.

After starting 16 games for the Suns this season, Morris since has lost his starting job and now finds himself behind Jon Leuer and Mirza Teletovic in Hornacek’s rotation.

Following Morris’ run-in with the head coach — incidentally, Hornacek also got in a shouting match with Marcus Morris nearly a year ago — Markieff was suspended two games by the Suns on Christmas Eve, according to Yahoo.

As for Morris’ response Wednesday night regarding the tossed towel?

“That’s between me and ‘H’ (Hornaceck),” Morris told the Arizona Republic. “It’s not for media. It’s something between me and him that happened. We’ll talk about it.”

After not playing a single minute in 7 of the previous 9 games, Morris has played sparingly in Phoenix’s last 4 outings. The fifth-year forward logged 17 minutes in his return to action, a win at New Orleans (one of the teams rumored to be interested in trading for him), and scored 13 points. He scored 8 points in 15 minutes versus Milwaukee, 4 points in 21 minutes at Utah and 6 points in 12 minutes vs. Denver.

Morris’ name already was one of the biggest swirling in NBA trade rumors. Now his departure from Phoenix (12-19) seems inevitable.

If it's not for the media, don't do it where all the fans can see?

Moments like this make me ashamed that the Morris twins ever donned the Crimson and Blue. -_-

Mental age for Markieff hit its peak about Jr year at KU. Since then, it has fluctuated from there downward, with these occasional dips to twelve or fourteen. Damn, but it is embarrassing to acknowledge him as a Jayhawk at times like this.

How are he and Phoenix in terms of contract –– will any other team want him on a long-term basis?

I always felt Marcus was the most talented of the two, but clearly, people who know more than me have disagreed. Markieff has, until this year, had the better pro career. With that said, who would have predicted Marcus's career would take off like it has in The Motor City this year? Marcus has answered the long held question, "can one play without the other?" Markieff, on the other hand, is playing with fire. His trade stock didn't go up any with this latest stunt. Clearly, he wants out of Phoenix, but he needs more than physical skills to elevate his trade value. Locker rooms are funny things. Want to take a risk of bringing in a potential "problem" mid year when there are lots of guys with similar talent around without as much growing baggage? Choose your 2016 New Year's resolutions carefully, Markieff.

Marcus has blossomed away from "Kieff. Maybe not surprising.

I have said it before, Marcus' trade was the best thing that happened to Marcus and the worse thing for Markief.