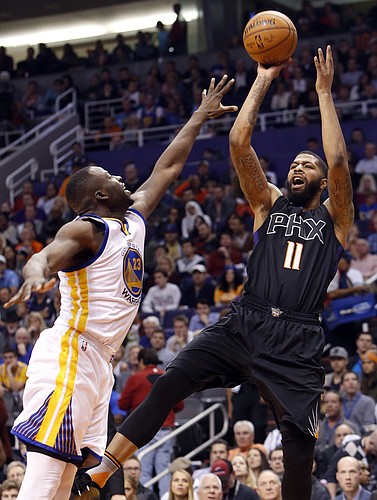 Unlike his brother Marcus, thriving on a new team this season, it seems doubtful Markieff Morris is too thrilled with his situation in Phoenix right now.

Then again, his basketball troubles could only be temporary. Morris’ days as a member of the Suns might be numbered.

Although the 6-foot-10 power forward has played for Phoenix since he left Kansas in 2011, Morris, angered the team abruptly traded his brother, publicly postured for a trade this summer. He changed his tune upon reporting to preseason camp, but as the season progresses, it appears Morris never has completely gotten over it.

Way back during the first week of the regular season, Marcus Morris told mlive.com he couldn’t believe Markieff was still with Phoenix. What’s more, the new member of the Pistons said his twin brother didn’t “look happy.”

Marcus said he knew Markieff well enough to sense his demeanor had changed, and he didn’t understand why the Suns hadn’t traded him, too.

“You're in the league, a player says he doesn't want to play somewhere, and everybody's asking him about it. I haven't really seen too many places that kept the player who doesn't want to be there," Marcus said at the time.

While many around the NBA assumed Markieff’s name would come up in trade talks sooner or later this season, that line of thinking picked up heat this past week with ESPN’s Marc Stein reporting Houston might be looking into a deal for the disgruntled forward. From there, it didn’t take too long for other potential destinations, such as New Orleans, to pop up on the rumor-obsessed Internet.

ESPN sources say the Houston Rockets have trade interest in Markieff Morris, who was a DNP-CD in the Suns' narrow loss Sunday to Memphis

None by Kurt Helin

Fueling the speculation, Morris hasn’t played a single minute in three of Phoenix’s past five games. AZcentral.com reported Markieff chose to sit out a Dec. 2 game against Marcus and the Pistons with a bruised knee. Suns coach Jeff Hornacek then declined to play his team’s lone Morris twin at Memphis. Reportedly, Morris missed Wednesday’s game against Orlando due to illness. Two days earlier, he only played 7 minutes (off the bench) against Chicago.

On the season, Morris’ numbers have dropped off from a year ago, when he enjoyed his best campaign in the NBA. He’s only scoring 11.4 points and shooting what would be career-lows from the field (38.6%) and from 3-point range (27.9%), despite some good games here and there in November.

The more you read the writing on the wall, the more likely it seems Phoenix will part ways with the player it drafted 13th overall in 2011.

For what it’s worth Suns general manager Ryan McDonough, as reported at ArizonaSports.com, went on a local radio show and had good things to say about Morris.

McDonough praised Morris for his attitude and pointed to his cheering reaction from the bench when Teletovic scored a game-winning basket.

Mirza Teletovic​ hustles for the board and tosses in the @Suns​ winner! https://t.co/wooYJt152W

“Are we shopping him? I wouldn’t necessarily say that, but we’re looking at whatever we can do to upgrade our team,” Phoenix’s GM said. “The trade deadline is in late February. Despite our struggles, I think as we sit here today we’re one game out of the eight spot in the West, and I think we just went through the toughest part of our schedule and we were able to keep our head above water, so to speak.”

McDonough went on to say the Suns don’t have a player they’re “just trying to get rid of.”

“We don’t really look to make moves that would have us take a step back, or I guess be considered lateral moves. If there’s a trade that makes our team a whole lot better in the short and long-term, we’ll do it. But short of that we’ll ride with the group we have.”

All of that might be true, but if the Suns have privately decided to use Leuer and Teletovic as their power forwards, instead of Morris, other teams are going to inquire about a trade.

Even if Morris has slumped this season, his size and ability to stretch the floor are obviously coveted (see: Houston and New Orleans rumors). If the right trade offer comes along, Phoenix would move him. The Suns’ GM essentially said so himself.

How do stupid people end up being General Managers in professional sports?

Sounds to me like the organization is saying all the right things because Morris may have become a cancer they need to get rid of. He is a talent, but this summer when Marcus was traded he went on a rant of not wanting to be there. It is possible they are sick of him now, and playing nice until he is gone.

Grow up, Markieff. You are only hurting yourself.

It's interesting how Marcus is flourishing away from 'Kieff.