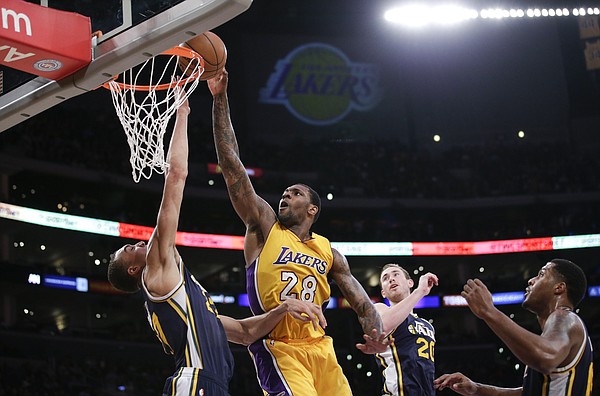 Los Angeles Lakers' Tarik Black, center, goes up for a basket during the second half of an NBA basketball game against the Utah Jazz, Thursday, March 19, 2015, in Los Angeles. The Jazz 80-73. (AP Photo/Jae C. Hong)

In the grand scheme of things, the next couple of weeks are fairly meaningless for the Los Angeles Lakers.

At 20-54 with eight games left, the marquee franchise won’t come close to sniffing the playoffs this season. Really, the Lakers would be better off losing out to give themselves the best chance at retaining their 2015 lottery pick, which is top-five protected.

But you better believe the final games of the season mean the world to rookie big man Tarik Black. Undrafted out of Kansas, and waived by Houston in December, the powerful young big man now starts for one of the most storied franchises in pro sports.

That fact alone, however, guarantees Black nothing. As Mike Bresnahan wrote for the Los Angeles Times, the first-year post player currently finds himself in an ongoing audition for his future NBA livelihood.

Black’s contract for next season isn’t guaranteed, and though the Lakers would only have to pay him $850,000 in 2015-16 — we say only because this is the NBA, and most guys make millions upon millions annually — the wise-beyond-his-years 23-year-old told the L.A. Times he isn’t about to assume anything.

Black learned that the hard way, when Houston released him.

"Every article was the same — 'Tarik Black is a keeper, a surprise because nobody drafted him,'" Black told the L.A. Times. "Then a situation popped up where a star free agent came up (Josh Smith) and I ended up getting waived. It's why I tend not to think about tomorrow."

Since the second week of March, Black’s minutes have gone up, and he has responded with some solid outings, including double-doubles versus New York and Utah, and a career-high 16 points on Wednesday against New Orleans.

The more opportunities Black gets to prove himself, the more he looks like a legitimate role player who could contribute on a winning team.

Whether that is the Lakers or some other organization next season, Black told the L.A. Times he can’t let that bother him.

"I'm very happy with the way I've been playing. I love this organization. I want to stay with the Lakers. But if I end up somewhere else, I'll just have to work hard there as well.”

Black’s season has gone so well, he actually is ranked 10th on the Rookie Ladder blog at NBA.com.

If he can do that after all 30 teams passed on him in the draft, you know his effort and attitude will take him far in The Association — in Los Angeles or elsewhere.

As a Laker fan and a huge Jayhawk fan I LOVE that Tarik has a future with the team! Ironically they had to waive Xavier Henry to get him. X was a surprise last year for the Lakers and I hope he finds a home in the NBA.

I love seeing someone like Tarik Black succeed when nobody was willing to draft him. I wish him the very best and will continue to root for him as I watch his progress.

Keeping my fingers crossed that Tarik's talent and work ethic pay off for him. Jayhawk Nation is cheering for you, buddy!

Ain't that the truth! Think he could have made a difference against WSU -- you know, someone actually grabbing rebounds and so forth?