On to the next round: Pierce, Chalmers, other Jayhawks advance in playoffs 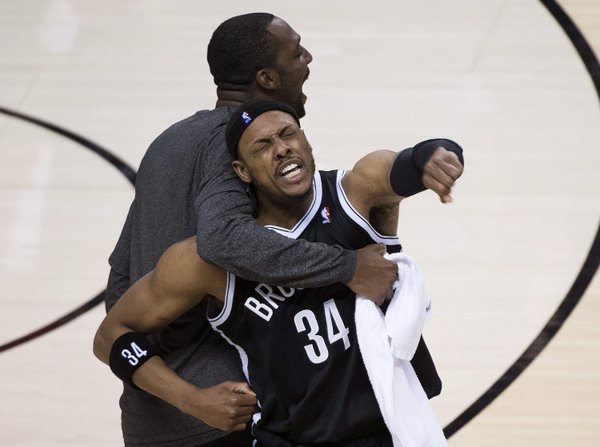 During the first round of the NBA Playoffs, the narrative moved back and forth regarding how much Brooklyn needed veteran small forward Paul Pierce in crunch time.

In his 16th season out of Kansas, Pierce only scored 10 points in 25 minutes in Sunday's Game 7 at Toronto, but he made one of the top defensive plays of the postseason so far in the final seconds, blocking Raptors guard Kyle Lowry in the paint. His blocked shot sealed a 104-103 Brooklyn victory, and saved the Nets' postseason.

If not for Paul Pierce's freakishly long fingers pic.twitter.com/VzwBWlE3TJ

Paul Pierce Saves the Series with a Block on Kyle Lowry! by NBA

If Lowry's shot had dropped through the net, Toronto would have moved on to the Eastern Conference semifinals. Instead, it will be Pierce and the Nets taking on back-to-back NBA champion Miami in the next round.

Newsday's Rod Boone and the rest of the media on hand spoke with an elated Pierce after the thrilling Game 7 win. The Truth was asked if he had ever swatted a shot to win a game.

"Nah, I don't think at this magnitude. On the road. Game 7. You're playing for your lives and you've got to sell out for your team.

"I really didn't have a great offensive game. I was in foul trouble most of the night and sometimes you've got to find ways to help your ball club win.

Pierce didn't make a basket in the fourth quarter, but he proved yet again he can still come through in crunch time.

On to the next round 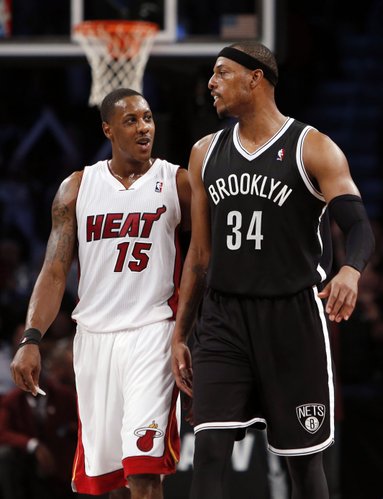 Pierce wasn't the only former Jayhawk to move on to the second round of the NBA Playoffs. In fact, his Nets will be up against another KU product, the Heat's Mario Chalmers, in the East semis.

Miami is one of the favorites to win the NBA Finals, but Brooklyn swept the Heat in the regular season, so this could be a long, exciting series with the Nets trying to knock out the defending champions.

After disposing of Toronto, Pierce told reporters the Nets know taking on LeBron James and the Heat will be quite a challenge. Here is what Pierce said in Lang Whitaker's preview for NBA.com:

That mentality showed during the regular season, when Pierce averaged 21.3 points in Brooklyn's four wins versus the Heat — he didn't average 20 or more points against any other team in the league this year. Pierce hit 55.3% of his shots against Miami, 45% of his 3-pointers, and averaged 4.5 rebounds and 2.8 assists.

Among the rest of the 'Hawks in the NBA lucky enough to make it to the playoffs, only Chicago's Kirk Hinrich didn't move on to the second round.

The Bulls were ousted by Washington, home of former KU power forward Drew Gooden. Though he only played 9.0 minutes a game in the first round and didn't even get off the bench in the Wizards' Game 5 victory, the typically jovial Gooden is looking forward to Washington's upcoming series with top seed Indiana.

Wheels up! Indy here we come!

I've been hearing everybody's picks on who's gonna be in the conference finals. No love#Wizards?This is what fuels us! #Underdogs#bandwagon

Gooden, a late-season acquisition in D.C., only faced the Pacers once this season, and had three points and six rebounds in 20 minutes of a Washington win on March 28. Indiana won the two previous regular-season matchups.

Oklahoma City backup big man Nick Collison might only be a role player, but he's about to take part in what figures to be one of the most entertaining series of the playoffs as the Thunder take on the Los Angeles Clippers.

OKC and the Clippers split four regular-season encounters, in which Collison averaged 3.8 points and 4.5 rebounds in 15.8 minutes. Expect Collison to score easy baskets against the Clips, because he made 6 of the 7 shots he took against them this season.

The first game of Clippers-Thunder begins at 8:30 p.m. Monday (TNT).

For Thomas Robinson's season to continue on into the conference finals, his Portland Trail Blazers will have to oust always steady No. 1 seed San Antonio, the defending Western Conference champions.

The Spurs won the last two meetings with Portland to even the season series at 2-2. 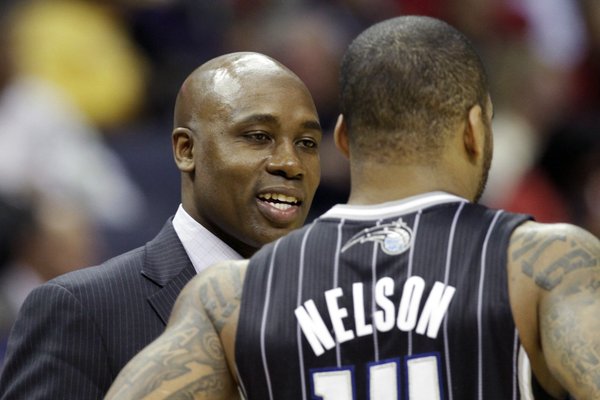 Orlando (23-59) didn't come close to making the playoffs. But that really wasn't part of the organization's master plan.

The Magic extended the former KU point guard's contract through the 2015-16 season, as reported by Josh Robbins of the Orlando Sentinel.

Robbins wrote that Vaughn, hired in the summer of 2012, has been patient as the franchise implemented a plan of rebuilding through the draft.

Vaughn started his head-coaching career with a 12-13 record. Since then, however, the Magic have posted a 31-108 record.

According to the report, Magic CEO Alex Martins and general manager Rob Hennigan have appreciated Vaughn's ability to build working relationships with players and "for maintaining an even keel despite the losing."

Vaughn and Orlando will find out May 20 at the NBA Draft Lottery just how useful the latest season of losing will be for the team's longterm success.

Neat pic there of Mario & Paul.