They're not booing in D.C., they're saying 'Drew'

Now that March Madness — and Stanford — brought a premature end to Kansas University's basketball season, all Jayhawks fans can do is sit around watching their Twitter feeds to see whether Joel Embiid will announce his intentions for next season, as in: Will he play at KU or in the NBA?

The good news? You can fill some of your KU hoops void with 'Hawks in the NBA. 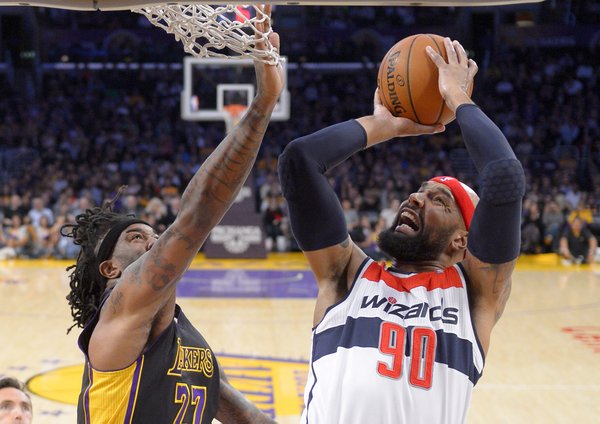 It's been about a month since our last 'Hawks entry here at KUsports.com, and probably the biggest news in that span was the return of Drew Gooden to the Association.

The bearded, No. 90-wearing veteran — out of the league since getting cut by Milwaukee last summer — joined the Washington Wizards. Initially, the Wiz signed Gooden to a 10-day contract, but he quickly proved his worth, and is under contract for the remainder of the season.

Washington no longer operates as one of the league's laughing stocks. So you'll get a chance to see Gooden in the playoffs. Entering Friday's games, the Wizards (36-35) held the No. 6 spot in the Eastern Conference, and it would take a significant collapse for them to fall out of the top eight.

Gooden came along slowly, with two scoreless games in very limited minutes to begin his stint in D.C. But when he gets minutes, he puts up points. Now in his 12th — though abbreviated — season, the 6-foot-10 veteran came through with a 21-point, nine-rebound outing in a key conference win over Brooklyn two weeks ago.

He has played in just 13 games, went scoreless in three of them (playing single-digit minutes on each occasion) and still averages 10.2 points and 5.7 rebounds in 17.5 minutes a game.

Gooden did get fined $15,000 for a flagrant foul, but mostly his return has worked out for him and Washington.

In a Sam Amick story for USA Today, the former Jayhawk said getting overlooked by the league when he could've signed with any team before the 2013-14 campaign has fueled his late-season addition in D.C.

"I've got a vendetta right now against all the other teams that overlooked me. I wanted to show them once I got an opportunity that I've got a passion and I love this game, and I wasn't going to go and leave my career like it was left last season in Milwaukee."

In his career, Gooden has played for 10 of the league's 30 franchises: Orlando, Memphis, Cleveland, Chicago, Sacramento, San Antonio, Dallas, the Los Angeles Clippers, Milwaukee and Washington.

McLemore reflects on highs and lows of rookie year 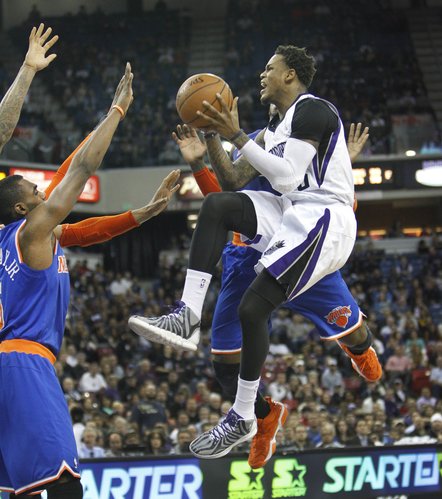 McLemore sat down with James Ham at the Cowbell Kingdom blog for a Q & A this week. Here are a few of the more interesting comments from the rookie, who is constantly learning and adapting in the league.

The reporter asked McLemore what it was like to see Andrew Wiggins and Embiid playing for KU, knowing he could've played with them as a sophomore if he didn't leave for the NBA:

"You’re right, I could have been out there playing with those guys and just having fun playing Kansas basketball with those guys. But at the same time, I made a great decision to come to the NBA. I definitely don’t regret that. I have a great opportunity right now in a great situation."

McLemore also discussed his life-changing NBA contract, which took him from having very little money to a whole lot.

"I think it’s been great. I really haven’t had a problem. My family – as long as my mom, my sisters and brothers are fine, that’s the people I’m looking out for. I’ve got a lot of family and they know my situation and they understand that I did this and I’ve worked hard to get in this position."

McLemore said he will be back in Kansas this summer, taking classes.

"It’s very important because I want to get my degree. I was the first one out of my family to go to a university and I would be the first to have a degree. To look back and tell my kids that their dad got his degree in college, to tell them that this is important, that school is important. And my mom would be proud. She’d be even more proud if I got my degree."

Read the entire interview at CowbellKingdom.com.

Sacramento (25-46) is out of the playoff hunt in the Western Conference. 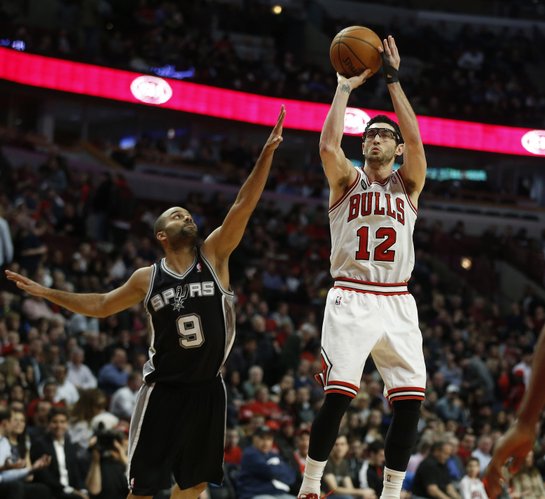 Even though Chicago lost former league MVP Derrick Rose for the season due to a torn right meniscus, the Bulls have remained one of the top teams in the East.

After Hinrich's 18-point night helped Chicago beat the East's top team, Indiana, earlier this week, Sam Smith of bulls.com wrote that the former Kansas guard reflects the hard work of the Bulls, even though he might get overlooked.

As the article touches on, Hinrich hasn't had a stellar shooting season (39% field goals, 35% 3-pointers). He told Smith:

“The hard thing is when it’s not going in and you are not making it to stay confident and looking for your shot. But I feel I’ve done a better job (the last few months). I feel I’ve turned a corner in that regard.” 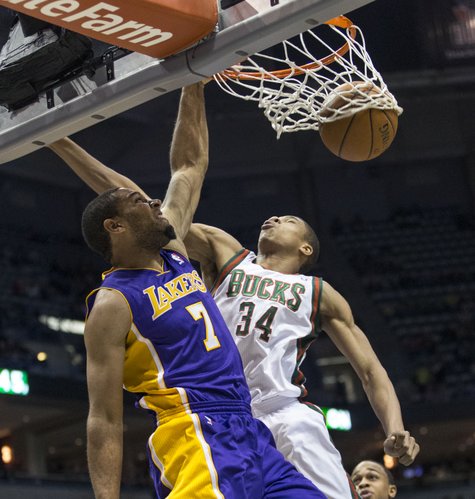 Milwaukee Bucks' Giannis Antetokounmpo can not stop Los Angeles Lakers' Xavier Henry from dunking the ball during the first half of an NBA basketball game Thursday, March 27, 2014, in Milwaukee. (AP Photo/Tom Lynn)

Xavier Henry had to hit the pause button on the best season of his career when he was diagnosed with an abnormality of the lateral meniscus in his right knee.

After missing all of January and February, Henry (10.3 points per game, 42.2% shooting) returned to the Los Angeles Lakers' lineup in March, and has played in 11 of L.A.'s 12 games since then.

He dropped 24 points on San Antonio on March 19 in a loss, and later scored 22 on 8-of-11 shooting in a win against the Knicks earlier this week.

As you can see, the knee is doing just fine.

Still, as Mark Medina wrote for the Los Angeles Daily News, teammates both admire and worry about the explosive Henry.

Fearless attacks on the rim have proven to be the norm for Henry, who hurt his left wrist doing so after returning from his knee injury. So the Lakers try to convince him to take it easy.

Here's what Henry told Medina of his teammates' conversations:

“All the time they tell me I’m crazy. They say, ‘What are you doing this for? You have nothing to prove.’ I have something to prove to myself. I’m not quitting. I’m not going to take a step back.”

D Rose tore his meniscus this year, not his ACL. He may come back for the playoffs.

You're absolutely right about the injury. Thanks. Got the order of the injuries flipped.

Looks like the Bulls are gonna have to play that Rose-might-play game again.

love that bmac be in Lawrence taking courses