For months, all interested parties assumed Kansas University basketball products Andrew Wiggins and Joel Embiid, as well as Duke's Jabari Parker, would go in the top three picks of the 2014 NBA Draft.

Late last week, serious doubt surrounding that theory appeared out of nowhere with the news that 7-foot Embiid had a stress fracture in the navicular bone on his right foot, which required surgery and at least four to six months of basketball-less recovery.

Now the center whose name many began pencilling in as Cleveland's choice at No. 1 could drop out of the top three, and some have suggested Embiid could fall as far as the bottom half of the top 10.

The fall of Embiid actually helps his KU teammate Wiggins, who could be Cleveland's new favorite choice, given Embiid's back and foot injuries during the past year.

In the Consensus Mock Draft put together by NBA.com's Drew Packham, Wiggins goes No. 1 to the Cavaliers, and Embiid falls to No. 3 and Philadelphia.

Using Packham's hub of mock drafts, as well as a couple others, we can see that Wiggins is a popular choice for Cleveland, but predictions regarding Embiid vary quite a bit more.

The clock is ticking in NBA front offices, and we can stop worrying about mock-ups come Thursday night, in Brooklyn, New York. Until then, here is the latest on the Jayhawks' stock. 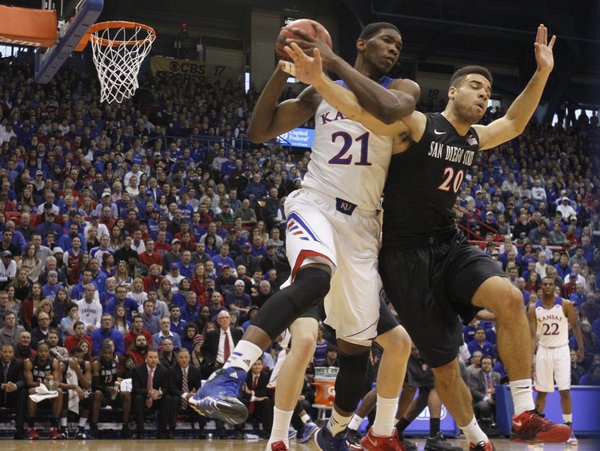 Kansas center Joel Embiid wrestles for the ball with San Diego State forward JJ O'Brien during the second half on Sunday, Jan. 5, 2013 at Allen Fieldhouse. by Nick Krug

Stock assessment: It seemed as recent as a week ago people were willing to look past Embiid's back injury, which kept him out of postseason games at Kansas. Now that his navicular bone is in the early stages of a lengthy healing process, his longterm health is under far more scrutiny. With multiple debilitating injuries popping up in the past six months alone, some NBA executives could be scared of wasting a high draft pick on a player who could spend more time on the injured list than the court.

Overall movement: Falling — Embiid's seemingly limitless ceiling appeared to make him too good to pass up on at No. 1. His footwork, athleticism and ability to protect the paint made him the most coveted commodity to enter the NBA Draft since Kentucky big man Anthony Davis went No. 1 to New Orleans two years ago. Now the graceful (when healthy) big man is listed by oddsmakers at Bovada as the third-most likely No. 1 pick (12 to 1 odds) on Thursday, behind favorite Wiggins (1 to 2) and Parker (7 to 5). Soon we'll know which NBA franchise is willing to gamble on Embiid, and trust he can still have a prosperous career in the league. 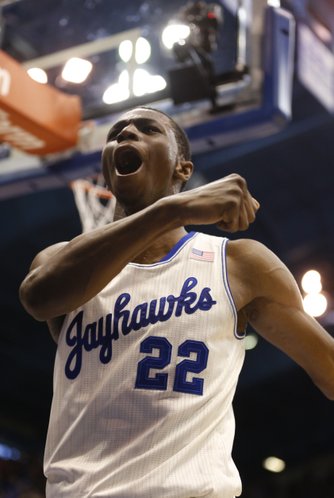 Kansas guard Andrew Wiggins celebrates after delivering on a breakaway dunk against Kansas State during the second half on Saturday, Jan. 11, 2014 at Allen Fieldhouse. by Nick Krug

Stock assessment: Embiid's loss is Wiggins' gain. The wildly athletic Canadian arrived at KU as the projected No. 1 pick in the 2014 NBA Draft, and now he could be back atop Cleveland's big board. If Embiid and Wiggins have one thing in common besides their year at KU, its their upside. With a clean bill of health and the kind of speed and leap-out-of-the-arena ability that are difficult to find, Wiggins could turn into a better pro player than Parker, even if Parker is more ready to contribute right away.

Overall movement: Rising — Seven of the 11 current mock drafts examined here have Wiggins going No. 1. That could mean he begins his NBA career in Cleveland. Or it could mean some other team who covets a young player with a bright future offers the Cavs some sort of trade package to land Wiggins. Philadelphia is thought to covet Wiggins, and the 76ers might be willing to trade up two spots from No. 3 to make sure they can get him.