Las Vegas a showcase for Andrew Wiggins, other KU products 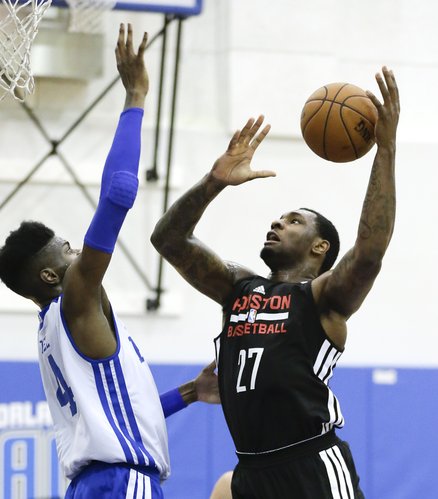 While Las Vegas became the center of the NBA universe this week, thanks to the arrival of the most sought after free agent on the planet, LeBron James, it will remain the league's epicenter for the next 11 days as far less known players try to make names for themselves.

The Vegas summer league opens Friday, and between now and July 21, seven former Kansas University players will be in uniform — some just trying to work on their games and become valuable pieces for their franchises, others hoping to impress the right decision-makers enough to land contracts.

Cleveland's No. 1 pick in the 2014 draft, rookie Andrew Wiggins, highlights the Jayhawks playing in Sin City. The explosive 19-year-old wing gets his first taste of the league at 7 p.m. (CST) Friday against Milwaukee and No. 2 pick Duke's Jabari Parker.

Wiggins sat down for a video interview with Fred McLeod, of the Cavs' website, and said he already is getting comfortable with his summer league teammates.

"I'm settling (in) pretty good," the one-and-done KU product said. "Coming in as a rookie, you know, there's a lot of new plays thrown at you. You just kind of have to get situated and feel comfortable — if you have any questions, ask questions. You really don't know the offense too well, so you've just got to learn."

McLeod asked whether Wiggins had to "flush out" the offensive sets he learned at Kansas and "learn from scratch." Wiggins said that wasn't the case. Rather he needed to familiarize himself with the intricacies of plays — where to dribble, when to look for a hand-off, knowing where to find back-door cutters.

"Some things from Kansas really translated to the next level," Wiggins said. "But also, there's a lot of new things I'm learning here, too."

The Cavs have made it clear they expect the 6-foot-8 rookie with a 7-foot wingspan to impact the game on defense immediately. Wiggins said his interest in that aspect of the game first materialized when he was in elementary school.

"I just always liked to defend," he said. "You know, my father (former NBA player Mitchell Wiggins) always told me that defense will bring you far. So that's always something I try to key in on."

Offensively, of course, the young skywalker admitted running the floor in transition is what he's best at right now.

"I've gained a lot of weight so I feel a lot more comfortable in the paint." - @JeffWithey http://t.co/3ySomYEoWE | pic.twitter.com/CJOVrMC4WV

A year ago, as a rookie, Jeff Withey didn't know what to expect out of the summer league, or the NBA in general. This time around, the 7-footer told media at New Orleans' mini-camp, he has a much different outlook.

"I'm definitely a lot more comfortable," the Pelicans big man said in a video on the team's website. "I felt like I ended the season pretty confidently and I'm just trying to bring that into summer league. It's not as stressful for me, just because I know I'm under contract, I know that I have a year underneath my belt, so I know kind of what to expect. Last year was kind of a little frantic and (I was) kind of just worried about everything. Now I get to sit back and actually just play."

With one more year of NBA experience than his former KU cohort Withey, Portland's Thomas Robinson said, individually, his offseason will be about improving his mid-range ability and developing go-to moves in the post.

"Other than that, just being smarter with the basketball — being able to read things before they happen and stuff like that," the 6-foot-10 power forward told the Trail Blazers' website.

Unrestricted free agent Cole Aldrich has played four years in the league and he'll suit up in Vegas with New York, the franchise that signed him to a one-year deal late last September, a little more than a month before the start of the season. The 6-11 center told the Journal-World he wants to re-sign with the Knicks. These summer league games could make that happen.

"This summer is a little different than last summer," Aldrich said earlier this week. "I think things this summer will get done quicker. Last summer was wait, wait, wait."

The other former Jayhawks playing in Las Vegas are: Tarik Black (Houston), Elijah Johnson (Philadelphia) and Ben McLemore (Sacramento). Like Aldrich, Black, Little and Johnson are not under contract with a franchise. Black also played for Houston in the Orlando summer league, where he had 11 points, five rebounds, an assist, a steal and a block in 21 minutes on Thursday.

Reports are that LeBron James will return to Cleveland. If he does, it will mean more pressure on Wiggins to grow up quickly, but he will be helped by LeBron in terms of assertiveness.