Mr. Confidence: Chalmers more comfortable than ever in Miami 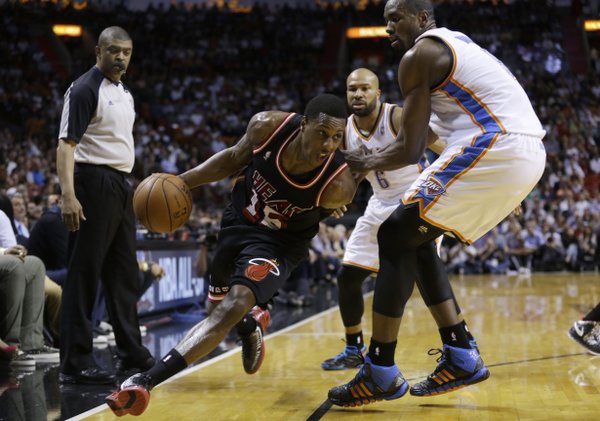 Mario Chalmers never lacks in the confidence department when he steps foot on the basketball court.

So it should come as no surprise that the Miami Heat's complementary guard took his answer into another stratosphere when asked by Shandel Richardson of The Sun Sentinel to rank his current comfort level on the floor, from 1 to 10.

"It's at 1,000," Chalmers said. "Just being around these guys three or four years, it's really helped me a lot. I just know where to put the ball where they need it."


Those who watch the Heat on a day-to-day basis think this could be the best season of Chalmers' career — he averages 9.8 points and 5.1 assists while shooting 46.7% from the floor.

Miami coach Erik Spoelstra spoke highly of Chalmers in Richardson's story, noting the sixth-year guard's ability to take on more responsibilities when the Heat are without key players, such as Dwyane Wade, Ray Allen or LeBron James.

"He's a capable playmaker. He's become a lot headier on which plays to make, whether he's facilitating, whether he's being aggressive or he's setting other people up. That takes experience … He's grown tremendously."


That's what playing in three straight NBA Finals and winning the last two league championships can do for a player.

And clearly the whole Heat roster has latched onto that level of swagger. Chalmers posted a photo of Miami's players decked out with WWE championship belts on his Instagram account — mchalmers15.

Apparently James hooked up the whole team with the wrestling-style hardware. Hopefully they won't resort to hitting opponents with steel chairs any time soon. 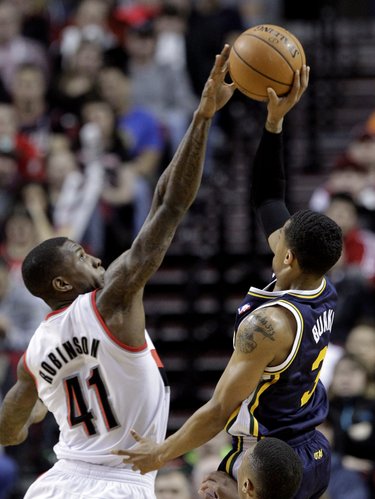 Does one highlight deserve its own section in a blog?

In case you missed it — you know, the way Corey Brewer missed out on making it all the way to the rim once Robinson chased him down on Sunday in a Blazers victory — here is the denial that turned into a fast-break jam for Portland.

The monstrous block only made up a small portion of Robinson's dominant night off the bench, as he finished with 14 points and 18 boards in 33 minutes.

But, obviously, the media — including the Oregonian's Joe Freeman — wanted to talk with Robinson about the denial, which led set up a Wesley Matthews lob to Will Barton on the other end of the floor.

Robinson told reporters how it went down — and referenced a technical foul he earned for taunting Brewer after the alley-oop that sent the Portland fans into a frenzy.

“I just knew it was a timing thing,” Robinson said of his block. “I saw him on the break, I sized him up, and I went to go get it. I don’t know how to explain it. Adrenaline shot through me, I was hype, probably said a bunch of stuff. I don’t remember what I said.”


Robinson, who averages 4.4 points and 4.1 rebounds in his second season, had seen a jump in minutes with Portland All-Star forward Lamarcus Aldridge out due to a groin injury.

Unfortunately for the power forward from Kansas, he injured his knee in Portland's next game, against Denver, and is a game-time decision for a Wednesday night meeting with Brooklyn, reports Sean Meagher of The Oregonian.

Henry close to a return 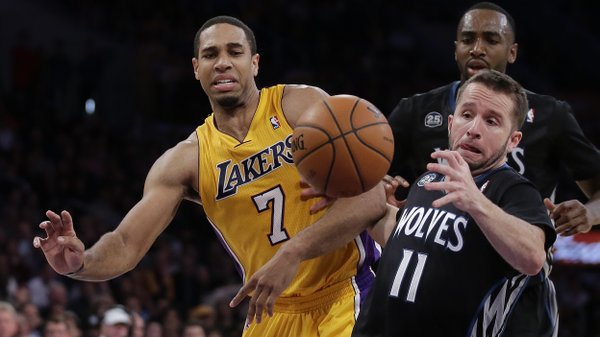 Xavier Henry hasn't played a basketball game in 2014, but that could soon change for the fourth-year guard out of Kansas.

Dave McMenamin of ESPNLosAngeles.com reported Henry, who was diagnosed with an abnormality of the lateral meniscus in his right knee, has been "ramping up his workouts" and could return to L.A.'s lineup within the next few days.

McMenamin asked Henry how his knee felt on Tuesday.

"No pain. It just feels good. Now that I'm getting to work out, I can get it strong without having to worry about it swelling up because it hasn't swelled up yet too bad. So, it's doing pretty well."


Henry, in the midst of a breakout season (10.1 points, 42.5% shooting) before suffering an injury the last week of December, told McMenamin he is past suffering a similar setback with his knee after missing almost two full months worth of games.

A number of 'Hawks in the NBA tweeted out congratulations after Kansas earned a share of its 10th straight Big 12 title on Monday.

S/O to coach self and KU all the great players and coaches that's been apart of the decade of… http://t.co/E7buiOYW7H

Congrats to my Jayhawks on another big 12 title. Rock chalk Jayhawk

Congrats to my Jayhawks on 10 straight Big 12 titles. Proud of you guys. Keep the tradition going. #RockChalk

Pretty good, but I still like this one better: http://www.youtube.com/watch?v=DIgx-iYcnYA

Gives me goosebumps every time I see it.