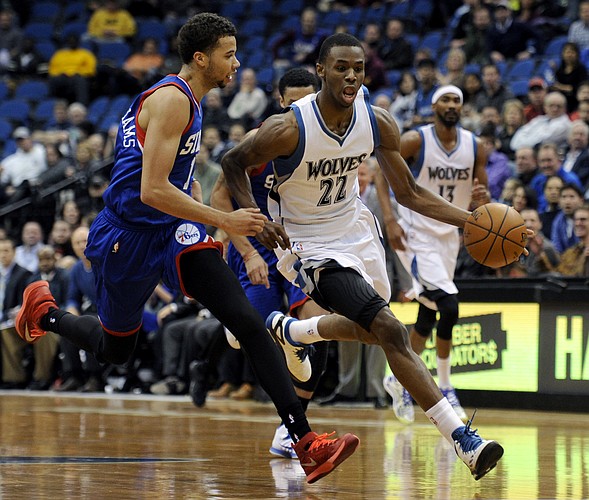 We’ve already heard an NBA legend by the name of Kobe Bryant sees some similarities between a younger version of himself and rookie Andrew Wiggins.

So perhaps we should’ve seen more comparisons for the one-and-done Kansas product coming.

Do we really need a detailed breakdown to determine whether Wiggins is better right now than LeBron James was when he was a rookie?

However, the power of the Internet and the folks at ESPN.com have provided just that. David Thorpe gives in-depth analysis of the future Hall of Famer, James, as a 19-year-old, and the future who-knows-exactly-what-he’ll-turn-out-to-be, Wiggins, on ESPN Insider.

How does Andrew Wiggins stack up with LeBron? @coachthorpe compares the top pick to 2003 LBJ. http://t.co/374yCccjU9 pic.twitter.com/rNhklFQfeg

Obviously, as Thorpe details, Wiggins isn’t as powerful as James was back in the 2002-03 season, nor does the Minnesota rookie possess LeBron’s ball-handling and distributing skills.

The breakdown did give Wiggins the advantage defensively, and as a shooter, though — which serves as a nice reminder that, despite what we heard when he was in high school, the young Canadian simply projects as a different type of player than the guy who is better at basketball than anyone else on the planet. And that’s OK.

There at least is a method to this maddening exercise. Wiggins and James will play against each other for the first time Tuesday night — 6 p.m., NBATV.

Not only does this give Wiggins a chance to go up against LeBron, it also allows the No. 1 overall pick to face the team that drafted him and traded him away before the season began.

As Wiggins said in a piece for Timberwolves.com, facing Cleveland should motivate him — “I think that’s obvious,” he added.

Since scoring 16 points against the L.A. Lakers and drawing Kobe’s praises, Wiggins hasn’t broken the 10-point barrier in three straight games, scoring 9 at Washington, 5 at Boston and 5 again vs. Indiana.

We’ll see how he responds for this one, with far more observers anticipating the matchup and waiting to make more comparisons.