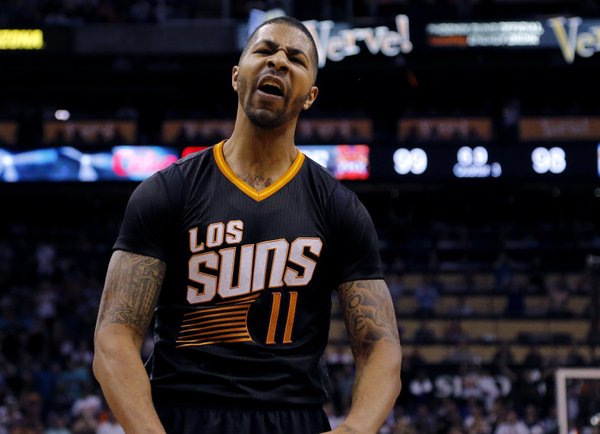 Phoenix Suns' Markieff Morris (11) reacts to a three pointer against the Oklahoma City Thunder during the second half of an NBA basketball game, Thursday, March 6, 2014, in Phoenix. (AP Photo/Matt York)

Don't be surprised in a few weeks if you see the following phrase scroll across the bottom of your television screen or pop up on your social media feeds: Phoenix's Markieff Morris named NBA Sixth Man of the Year.

All season long, the Suns — expected by some to be one of the worst teams in the league — have surprised the rest of the Association. But it didn't take long for it to become abundantly clear their early-season success wasn't a fluke. Now Phoenix (46-31), fresh off a 122-115 home win over Oklahoma City on Sunday night, has a legit shot at claiming one of the final three playoff spots in the highly competitive Western Conference.

And Phoenix, the West's worst team last season, couldn't have made such a turnaround without Morris — averaging 13.7 points and 6.0 rebounds in 26.4 minutes a game off the bench.

Morris hasn't started a single game for the Suns all season. That's because first-year coach Jeff Hornacek can trust him to produce as a sub.

Ben York of Suns.com recently wrote a case could be made for Morris (Markieff, not twin brother Marcus, who also comes off the bench for Phoenix and averages 9.8 points and 3.9 rebounds in 22.0 minutes) as the NBA's most valuable reserve.

In his third season, Markieff is having a career year. His best game, York points out, came in January against Cleveland:

Those around the Phoenix organization aren't the only ones thinking Markieff could bring home some hardware, either. 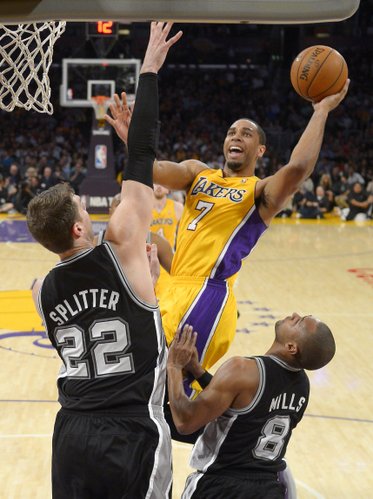 The Los Angeles Lakers (25-52) are so awful, there really isn't any reason for them to send hurt or worn down players out on the court.

They are lottery-bound, so the more losses, the better. In a move that should help facilitate as high a draft pick as possible, the Lakers announced Friday they're shutting Xavier Henry down for the remainder of the season.

Wrist and knee injuries suffered this season, Mike Bresnahan of the Los Angeles Times reported, will keep Henry sidelined for the final few games of what had been a breakout season (10.0 points in 43 games).

"My body is going to continually hurt as long as I keep pounding it and pounding it. It's tough to play with."

The L.A. Times reporter also asked Henry about his future with the Lakers, because he will become a free agent in the offseason.

"I hope to be here. I hope they want me, but you never know."

As Shams Charania wrote for RealGM.com, Henry took on the challenge of playing while hurt late in the weeks leading up to L.A.'s move. Henry's decision to do gut it out for a while came in part because of what this season has meant to him.

Mario Chalmers: 'I always wanted to be a Tar Heel' 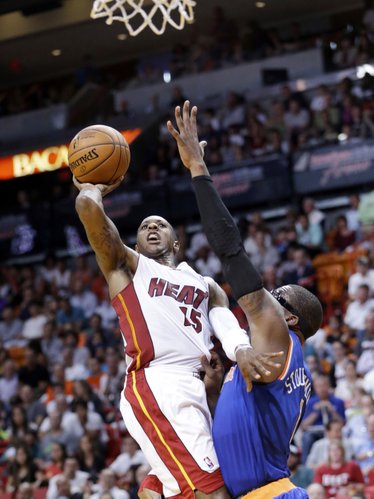 Miami Heat guard Mario Chalmers (15) goes up for a shot against New York Knicks forward Amar'e Stoudemire (1) during the first half of an NBA basketball game, Sunday, April 6, 2014, in Miami. (AP Photo/Wilfredo Lee)

With a little help from Kansas basketball hero Mario Chalmers, Miami seems on its way to the No. 1 seed in the Eastern Conference.

In his last eight games, the sixth-year pro has outperformed his season averages, hitting 52% of his shots and producing 14.3 points and 4.0 rebounds, plus 4.0 assists (which is below his season average of 5.0).

Recently, Chalmers sat down for a Q & A with SLAM Magazine's Abe Schwadron. He talked about his upbringing in Alaska and also shared an interesting tidbit regarding his college recruitment:

"I wanted to go to North Carolina. I grew up a fan, my family is from North Carolina and I always wanted to be a Tar Heel. When the time came to make my decision, North Carolina didn’t offer me. So Kansas, I thought, was the best place for me to go out there and shine. I had a couple friends that I got close with during the recruiting visits. They made me feel at home, made me feel like a brother."

Of course, Chalmers capped his third year at Kansas by helping the Jayhawks win the 2008 national championship. He was asked to rank that accomplishment, compared to contributing to back-to-back NBA titles with the Heat.

"It’s up there. I’d say it’s a tie, really. In college, it’s one game, in the NBA, it was five games and then it was seven games. It’s different, but it still ranks the same in my book. Just the process of being there three years, and having to go from one year losing in the first round to losing in the Sweet 16 and then finally to win it. I just remember how much hard work we put in."

You can tell Chalmers doesn't regret his decision to play at KU. Look no further than what he posted on Instagram Monday: "6 years ago on this day we had a major accomplishment. Not only for ourselves and KU but for the entire city of Lawrence , Kansas. This is and will always be apart of me. ROCK CHALK JAYHAWKS"

6 years ago on this day we had a major accomplishment. Not only for ourselves and KU but for the entire city of Lawrence , Kansas. This is and will always be apart of me. ROCK CHALK JAYHAWKS by mchalmers6

We're now just nine days away from the last day of the 82-game regular season, so here's a look at where all of the NBA's Jayhawks stand in the hunt for the playoffs.