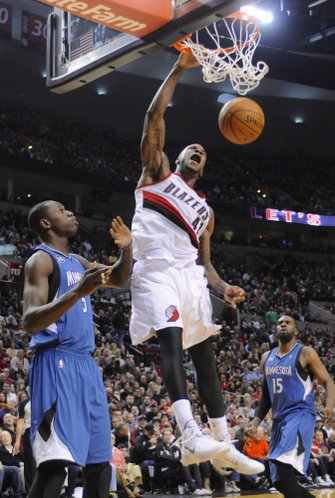 Drafted by Sacramento, then traded to Houston during his rookie year, second-year power forward Thomas Robinson finally feels at home in the NBA with his third team, the Portland Trail Blazers.

As Robinson told John Wilmes of bleacherreport.com, he has embraced his role as a key reserve, even when his minutes aren't substantial — he's averaging 4.9 points and 4.3 rebounds in 12.4 minutes for Portland (49-27), currently the fifth-best team in a stacked Western Conference.

The former Kansas star enjoys providing a spark off the Blazers' bench.

“Last year, I was trying to make my role, going out of my way to prove something. You want to show everyone you can do something, that you can do can do everything at first.”

“I’m a high-energy player, a defender, and an offensive rebounder. Not a scorer. I love who I am to this team, I wouldn’t change anything.”

Nick Collison, the next WWE superstar

During Oklahoma City's Thursday victory over San Antonio, which ended the Spurs' 19-game winning streak, Thunder power forward Nick Collison, known for his dirty work, added to his reputation as one of the NBA's tough guys.

The Spurs' Jeff Ayers accidentally elbowed Collison in the head late in the third quarter, creating a gash atop Collison's noggin. It looked more like Collison had been walloped with a steel chair in a WWE match.

When the blood began to pour down his face, the NBA twitterverse took a break from the entertaining showdown between two Western Conference powers to marvel at the bloodbath.

None by SB Nation

OKC's Nick Collison is bleeding badly with the Thunder up 10 late in the 3rd quarter. pic.twitter.com/RtZEPu8tCB

Hey Nick Collison, we have a First Aid mobile app to help with that head wound. #thunder #firstaid #ouch @okcthunder

None by Red Cross Oklahoma

As you can see in the video, the contact didn't look nearly as bad as the result.

The gritty backup big man played 13 minutes in the OKC victory, scoring four points, and didn't return to the game after suffering the cut.

The best part of the whole ordeal, Collison told Darnell Mayberry of the Oklahoman, was that even though he needed staples in his head to stop the bleeding, it didn't feel all that bad.

“Really, I’m surprised it was bleeding. It hurt a little bit. It stung. But I saw blood coming down my nose so I knew I had to come out.”

"It was one of those ones that’s awesome because you get a ton of credibility from blood coming down your face. But it really wasn’t that big of a deal.”

After the game, Collison couldn't resist joking about the injury, via Instagram, saying: "I really shouldn't have popped that pimple in the game tonight. Sorry guys." 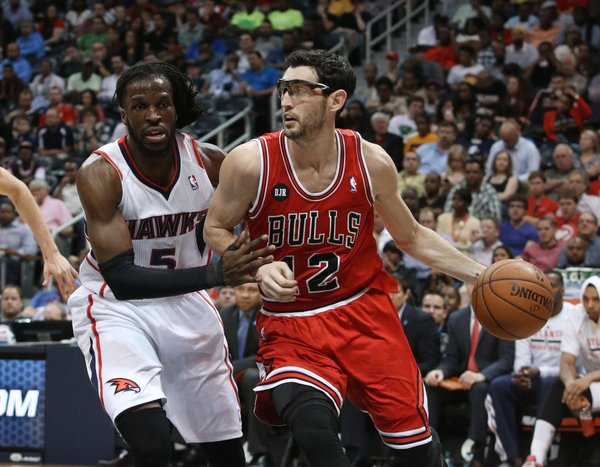 Kirk Hinrich's two-year deal with Chicago runs out at the end of the season, but it sounds like he would prefer to remain with the Bulls going forward.

Before putting up 17 points and six assists in a Chicago win at Atlanta Wednesday, the 11th-year guard who has spent nine seasons with the Bulls told the Chicago Tribune's K.C. Johnson there was a reason he signed with the franchise two summers ago, instead of taking more money to play in Milwaukee.

“I like it here. Obviously, returning home was a big factor in why I came back. I would like to stay here. But I don’t know what’s in their future plans. Right now, I’m just trying to enjoy it while I’m in it and take what comes later.”

"At this point of your career, you want to be on a team that is a good fit and has a chance to be a winner."

Despite the absence of Derrick Rose most of the season, the Bulls (43-32) currently sit in the No. 4 slot in the Eastern Conference, and could have home-court advantage in the first round of the playoffs.

We're now less than two weeks away from the end of the regular season, so here's a look at where all of the NBA's Jayhawks stand in the hunt for the playoffs.

Looking at this list makes it pretty evident KU under the Bill Self era has not produced a quality point guard. I sure hope Frank "The Bulldog" Mason becomes what we haven't seen since Heinrich. Big Man U needs a good point guard. Come one, com all.

I'm all for rooting for Jayhawks in the college game and after they leave KU. I just get fed up sometimes with the lack of expectation from our athletes, and how kusports tries to put a happy face on everything that is not necessarily good news. Five average points in 12 average minutes per game is NOT "...making a mark" in the NBA. Not even close. I'm not down on TRob. I love the guy and I'm glad he's crawled out of poverty. But last year's preseason football coverage inflated expectation past what was reasonable. And here and there I've also noticed that any criticism of the basketball team (and it was obviously deserved this past season) raised eyebrows among a writer or two, with one comment toward me declaring I was a "tough customer". Um, NO. I've just watched Kansas basketball for almost 40 years and I have a good sense of a team with a killer instinct. This team never had it, even with Wiggins. They even weakly defended Naadir Tharpe during one of his poor spells. Hopefully they realize that being a "good fan" is not synonymous with turning a blind eye to problem areas. While I certainly appreciate the student athletes, no one can rightly suggest that fans should be excited about a 4-win football season and a first weekend exit from the tournament. You don't have to be a Debbie Downer to call a spade a spade.

Agreed about lack of killer instinct with this year's bball team. Even in the past, Self has talked about "stepping on the throat" and "finishing" games where we had a fair lead, or even a double-digit lead, but somehow blew it. That mentality has to be within the players, at the right moments of a game. It may emanate from the coach (and there is ZERO doubt that Self has that mentality and has coached/voiced/yelled that expectation to his teams til he is red+blue in the face)...but its up to the players to execute it, or at least have a few key player-leaders do it by example, thus igniting a run.

Lets use resurgent KY as an example: Julius Randle has "it". Poythress has "it". That whole team only just figured "it" out during this Madness (against WSU, hate to say it...). Just because their whole season was analagous to our own youthful, inexperienced team, I am pulling for them to win it all. Last blueblood standing.

Regarding KU football. Hey, maybe our excitement is more about seeing "IF" some of the pieces we have been accumulating, coaching, and strengthening...can translate into a .500 (or better) season in the Win column. The only thing to be "excited" about this past football season was the first half of the season for Pardula, and the play of the defense as well as the nickel-scheme being proved as the right coaching adjustment...the problem was the defense wasnt helped at all by the offense, and that either changes, or heads will roll. I support the (current) KU football staff & program: they are trying, and bringing outside expertise. Humility, hard work, dedication. Add recruits, reps...

I hate to say this, but it seems like Coach Calipari has done a much better job of demanding performance from his players than HCBS did this year...I go back to Kevin Young, certainly not the greatest player in KU history, but dang it, watching Young in action you knew he was absolutely giving his 100% best every single minute of the game. Even Tyshawn, who sometimes made those bonehead plays, he was giving it his 100%, full energy. I just want to see these guys play with energy, drive, and determination for a whole game, which didn't happen very much this year. I don't expect to go undefeated, but the talent on this year's team was better than for 10 losses. Now we have a 7 and an 8 seed in the Finals...rather sad to see if you ask me, and it doesn't seem to be a big deal.

I can't wait until next year and see some FIRE! RCJH!