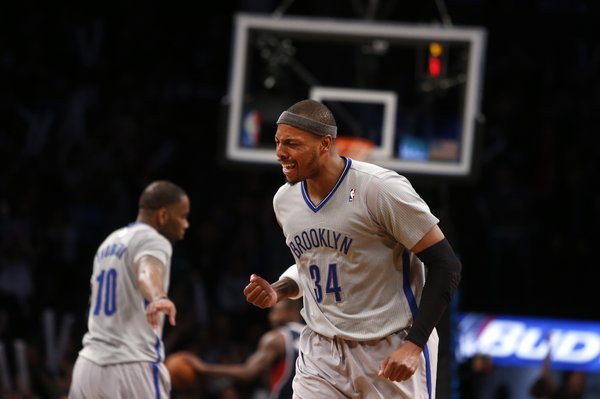 Ever since Paul Pierce left Kansas University a year early for the NBA in 1998, he has made a living putting up points.

On Friday, the 16-year veteran who earned his reputation with Boston reached an all-time milestone in his first season with Brooklyn.

Only one of Pierce's seven three-pointers connected in a home loss to Atlanta, but the one he hit in the second quarter carried far more significance than a typical regular-season, first-half trey.

The NBA compiled all of "The Truth's" landmark points — from 5,000 to 25,000 — in a video that kicks off with a young, headband-less Pierce putting in his first NBA bucket against Toronto in 1999.

Justin Tasch of the New York Daily News reported Pierce's 5-for-14 night and 2-for-6 showing at the free throw line had a lot to do with him thinking too much about the milestone, as his family and friends kept bringing it up beforehand.

“I was the same way when I reached the 20,000-point mark. I remember I couldn’t hit a shot in the first quarter because I was pressing just to get it. I’m just glad it’s over with and now I can focus on the rest of the season.”

The NBA Twitterverse tipped its collective cap to Pierce following the accomplishment.

KG on Paul Pierce: "I told him, 'Welcome to the neighborhood, man.' Congratulated him. Truth has been a big part of this league." #Nets 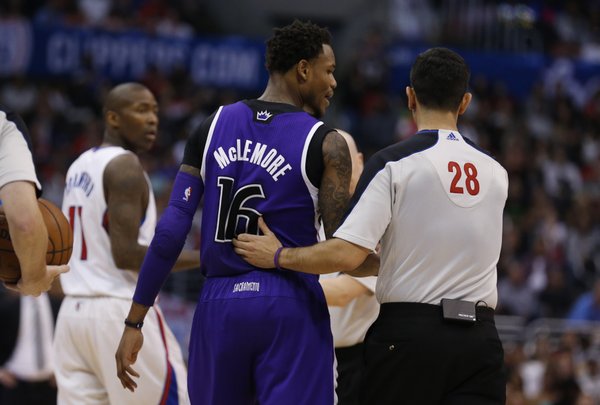 Sacramento Kings guard Ben McLemore is ejected after being called for a technical foul on Los Angeles Clippers guard J.J. Redick, as Clippers' Jamal Crawford, rear left, looks on during the second half of an NBA basketball game in Los Angeles, Saturday, April 12, 2014. The Clippers won 117-101. (AP Photo/Danny Moloshok)

If you heard a former Jayhawk earned an ejection after shoving an opponent who was defending him, who would you bet on as the culprit?

One of the Morris twins? Thomas Robinson? Mario Chalmers? Pierce?

Well, it happened on Saturday, and the answer was none of the above.

The typically smiling face of Sacramento rookie Ben McLemore showed a scowl in Los Angeles when he didn't like the way the Clippers' J.J. Redick defended him coming off a screen.

McLemore earned a technical foul for losing his temper, and it was actually his second of the game, so he was tossed after scoring 14 points in 32 minutes.

Prior to Saturday, McLemore hadn't even been whistled for a "T," let alone been ejected from a game.

It turns out Sacramento wasn't too pleased with the technicals. And the organization's frustrations weren't directed at its rookie shooting guard. McLemore's superiors thought both technicals were undeserved. Jason Jones of the Sacramento Bee reported the Kings are appealing the "T's" with the league office.

In fact, coach Michael Malone said the Kings couldn't believe one of their quietest players earned an ejection.

“That’s not who Ben is, and that wasn’t his intent.” 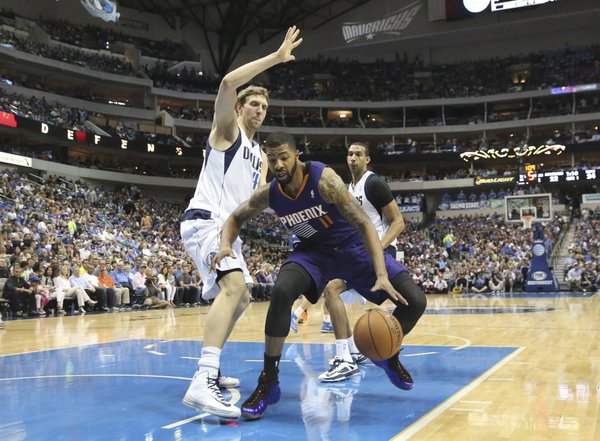 Dallas Mavericks guard Monta Ellis (11) drives to the basket between Phoenix Suns forwards Markieff Morris (11) and Channing Frye (8) during the second half of an NBA basketball game on Saturday, April 12, 2014, in Dallas. The Mavericks won 101-98. (AP Photo/LM Otero)

Phoenix — home of former Kansas standouts Markieff and Marcus Morris — entered Friday in the No. 7 slot in the Western Conference playoff race, as one of four teams jockeying for the final three available postseason spots.

But back-to-back losses at San Antonio and Dallas (the Mavericks were one of the four teams vying for the last available playoff spots) has Phoenix in a bit of a predicament with just two games left in the regular season.

Golden State and Dallas now have secured their tickets to the postseason, leaving the Suns (47-33) and Memphis (48-32) as the last two fighting for the final spot.

Phoenix hosts the Grizzlies Monday night, but a head-to-head victory alone won't assure the Suns of anything — as detailed by Paul Coro for azcentral.com.

Phoenix must beat Memphis and win at Sacramento in the regular-season finale Wednesday. Plus, the Grizzlies must lose at Dallas on Wednesday. That's the only scenario in which the Suns, whom no one expected to be in this position before the season, will advance to the playoffs.

"The season isn't over yet. We don't have any choice but to keep hope."

This is subject to change, with three days worth of games to be played, but here's what the matchups would look like if the playoffs began today, instead of this weekend.

Only three days remain in the 82-game marathon that is the regular season, so here's a look at where all of the NBA's Jayhawks stand in the hunt for the playoffs.