McLemore taking over in Sacramento 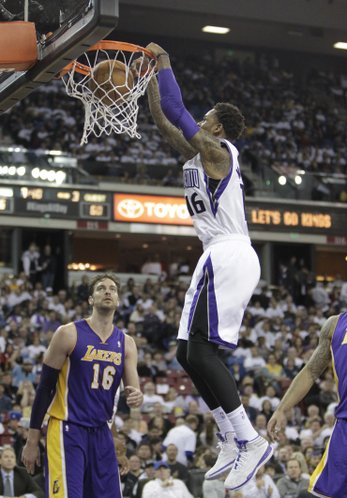 Former NBA All-Star point guard Kevin Johnson might be the mayor of Sacramento, but at the rate Ben McLemore is going, the Kings rookie guard could run for election in California's capital city and knock KJ out of office.

The reigning Western Conference Rookie of the Month kept adding to his resume this weekend. On Saturday, McLemore scored in double figures for the fifth time in six games, with 15 at Utah. Three of those, Sacramento's announcers tell us, came on "the biggest shot of his young NBA career."

That three-pointer, his 28th of the season (McLemore is shooting 35 percent on 81 tries), sent the game to overtime and the Kings (5-13) went on to snap a six-game losing streak.

The night before, in a 106-100 home loss to the Los Angeles Lakers, McLemore set a new career high with 20 points, via one of his typically ferocious fast-break jams and 4-for-7 shooting from downtown.

Look out, KJ. Mayor McLemore might take Sactown over sooner than you think.

This Sun is on fire 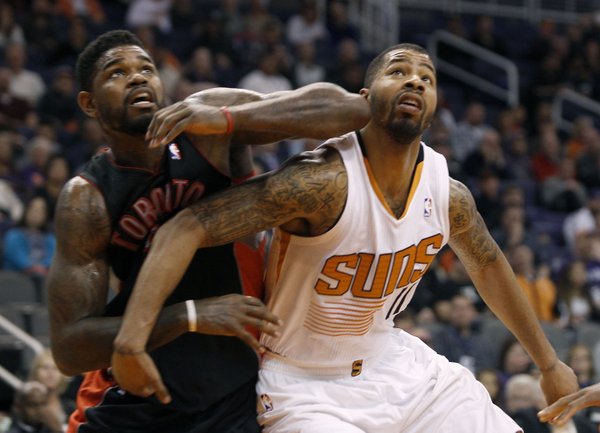 Toronto Raptors' Amir Johnson, left, and Phoenix Suns' Markieff Morris (11) battle for rebound position under the basket during the second half of an NBA basketball game Friday, Dec. 6, 2013, in Phoenix. The Suns defeated the Raptors 106-97. (AP Photo/Ralph Freso)

Back in KJ's old stomping grounds of Phoenix, Markieff Morris couldn't miss to open the Suns' victory over Toronto. Kieff knocked down his first 11 shots on the way to 25 points and 11 rebounds — both close to season-highs of 28 and 12.

The 6-foot-10 power forward out of Kansas, as well as his teammates and coach, had plenty to say about his big night, which helped Phoenix (currently ninth out West) improve to 11-9.

"I've just got a great feel for the game right now," Kieff said in the AP's story on the game. "I'm not trying to shoot as many 3s as I have in the past. I've just been working on driving to the basket and trying to get to the line."

Though Markieff was feeling it (more than twin brother Marcus, who had 10 points on 3-for-10 shooting vs. the Raptors), he still managed to pick up his third technical foul of the season. As Paul Coro of azcentral.com writes in his game notes, Kieff might be the most fiery Sun:

On Friday night, Morris picked up his third technical foul in 20 games as a reserve. He and Jonas Valanciunas did some shoving for a double-technical. The part that could have got Morris in trouble was following Valanciunas to midcourt to continue barking at him but Valanciunas never responded. 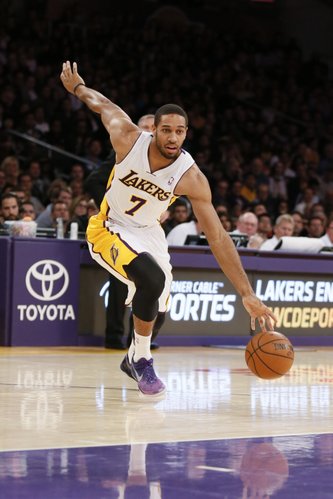 Most of the buzz in the NBA this weekend surrounded the return of the Lakers' Kobe Bryant, who played for the first time in almost eight months against Toronto on Sunday.

The L.A. legend, back from a torn Achilles tendon injury, scored nine points in 28 minutes, while former one-and-done Jayhawk Xavier Henry made the most of his 14 minutes off the bench, adding 17 points in a 106-94 loss to the Raptors.

Turns out the lefty Henry impressed Kobe (kind of … well, not really) with one of his moves. This from Bleacher Report's Kevin Ding:

Ryan Kelly and Kobe are joking on the bench about Xavier Henry actually finishing with his right hand. TOR 38, LAL 33.

Also, as you may have noticed if you saw the highlights from Kobe's return, he came out in pre-game intros to some familiar music — familiar to everybody except Xavier Henry, apparently.

Shouldn't he be in green? 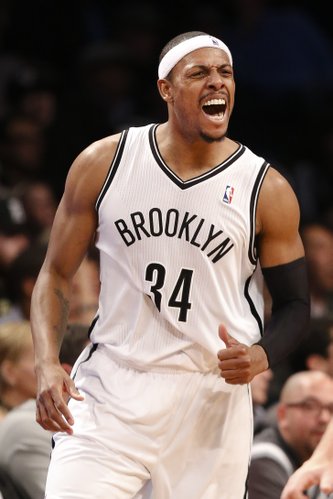 Brooklyn Nets small forward Paul Pierce (34) reacts to a score in the second half of an NBA basketball game against the Los Angeles Lakers at the Barclays Center, Wednesday, Nov. 27, 2013, in New York. The Lakers defeated the Nets 99-94. (AP Photo/John Minchillo)

The once unthinkable could happen as soon as tomorrow.

Paul Pierce, who spent 15 seasons leading the Boston Celtics, might play against them Tuesday night as a Brooklyn Net.

Check out all of Gary Washburn's twitter feed for much more on The Truth, and his thoughts on the Celtics.

Washburn, of the Boston Globe, also provides an in-depth feature regarding the struggles of former Celtics Pierce and Kevin Garnett, now that they're in Brooklyn (6-14).

“Those close to the Nets intimate that Pierce has lost his passion, still stunned from his departure from Boston and the only team he ever knew …”

“Pierce is shooting a career-worst 36.8 percent from the field in 15 games and has converted just 26.8 percent of his 3-pointers. Observers say Pierce is engaged at times and doesn’t seem interested at others.”

Don’t forget to keep tabs on all your favorite ‘Hawks in the NBA with KUsports.com's daily stat recaps.

This a great year for Jayhawks in the NBA. Not that I care that much about professional basketball, but I love seeing these guys doing well and it definitely helps recruiting when we can not only point to Jayhawks that got drafted but Jayhawks that got drafted and are playing well in the league. As much of an extremely important role player as someone like Collison is for the Thunder-- and basketball nerds definitely recognize his significance-- I imagine it's hard to recruit guys to KU saying they can follow his career trajectory. It's easier to use Xavier Henry, Ben McLemore, or the Morris twins.

The ESPN highlights of that Lakers game were 2 minutes of "Kobe, Kobe, Kobe." No mention of the team-leading Xavier, though I think I saw the back of his jersey in a shot. Ugh.