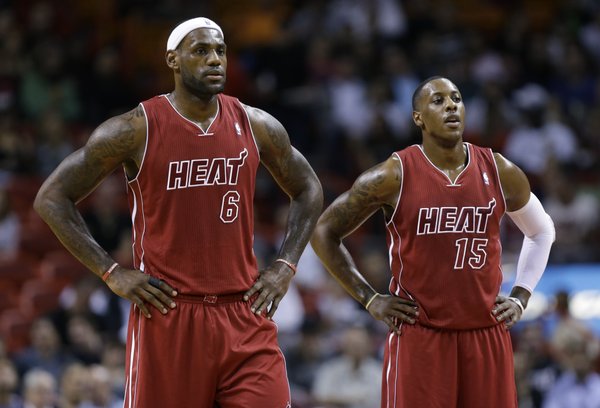 Miami Heat's LeBron James (6) and Mario Chalmers (15) stand on the court during the first half of an NBA basketball game against the Detroit Pistons, Tuesday, Dec. 3, 2013, in Miami. (AP Photo/Lynne Sladky)

Nothing says December like an avalanche of “Best of” lists. And the NBA wants in on the fun.

Nevermind that the All-Star game is two months away or that just a fourth of the season is in the bag, first returns from this annual popularity contest are in.

Two Jayhawks made the 50-deep after the earliest round of fan voting:

Of course, with just two backcourt slots and three frontcourt slots per conference, things don’t look good for Chalmers or Pierce. Leaders in the East received over 390,000 and 600,000 votes, respectively.

Fan voting for the 10 All-Star starters ends on Jan. 20, so if there’s any time to Rock Chalk the vote, it’s now. 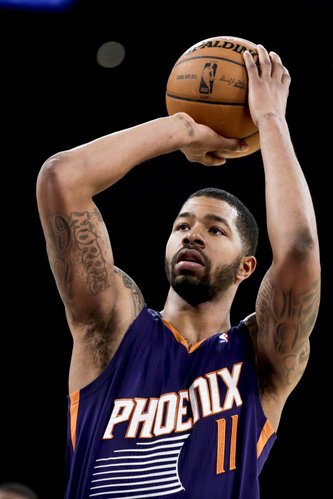 Phoenix Suns forward Markieff Morris landed on the initial 120-player All-Star fan ballot, but didn’t collect a noteworthy number of votes in the first round of results.

Not surprising for a bench player who’s just now showing up on the radar of many NBA fans.

Besides, Co-Sixth Men of the Year sounds like a much more fitting award for Markieff and brother Marcus.

The twins, through the first 22 games of the season:

Among all bench players without a single start this season, here’s how the Morrii rank:

Increased efficiency has played a big part in the twins’ success.

"I've just got a great feel for the game right now," he said. "I'm not trying to shoot as many 3s as I have in the past. I've just been working on driving to the basket and trying to get to the line."


The stats back it up. Markieff is shooting just 0.8 threes this season compared to 1.6 last year. And in just a few more minutes a game, he’s taking 3.7 free throws, up from 1.5. 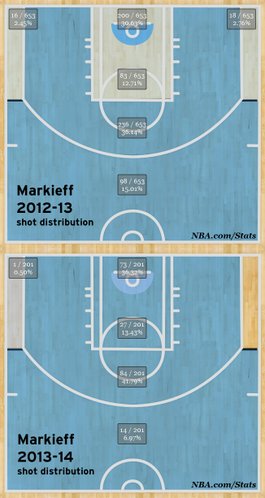 Defensive improvements have been just as important. 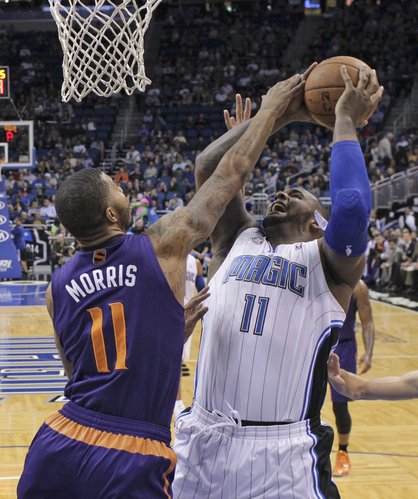 From Paul Coro of AZCentral.com:

“He’s focusing on his defense earlier,” Suns coach Jeff Hornacek said. “In the past, to me it looked like he didn’t want to play defense. He just wanted to be out there and kind of get by. Then all of a sudden, you get yourself in bad situations and you have to foul somebody. But he’s doing his defensive work early. Consequently, he’s in better position, and you don’t have to foul.”

“He’s not long enough to think he’s going to go block all the shots. He’s got to work on his positioning and he’s done a great job of that. The quicker reactions have helped him.”


And that whole twin thing? It’s working out for the Suns. 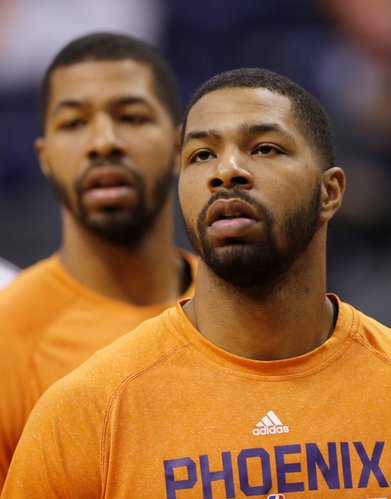 Phoenix Suns' Marcus Morris, front and his twin, Markieff Morris, warm up prior to an NBA basketball game against the Utah Jazz, Saturday, Nov. 30, 2013, in Phoenix. (AP Photo/Matt York)

When Hornacek first saw his team practice, he felt like the other three players on the court were non-existent when Markieff and Marcus Morris were playing together. Hornacek joked that when they want to make sure a pass is made in a called play, they have the twins on both ends of it.


“I think Markieff is one of the best passers on our team and he’s probably one of the best big-man passers in the league,” Hornacek said. “He can really see things happen. We try to put him in positions where he can make passes.”


Sounds like a recipe for success as the season enters its second quarter. 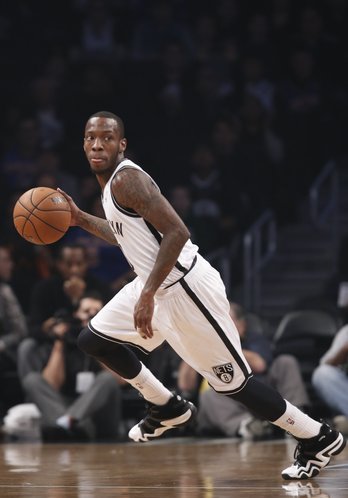 Brooklyn Nets guard Tyshawn Taylor (10) dribbles as he looks to pass in the first half of their NBA basketball game against the New York Knicks at the Barclays Center, Thursday, Dec. 5, 2013, in New York. (AP Photo/Kathy Willens)

Brooklyn Nets guard Tyshawn Taylor has been mentioned as a trade chip in a proposed deal with the Toronto Raptors, according to Yahoo’s Adrian Wojnarowski. Talks are ongoing, but considering Taylor’s lukewarm play and the return of starting point guard Deron Williams, the Nets may choose move the second-year pro.

Make sure that passport is up-to-date, Tyshawn. 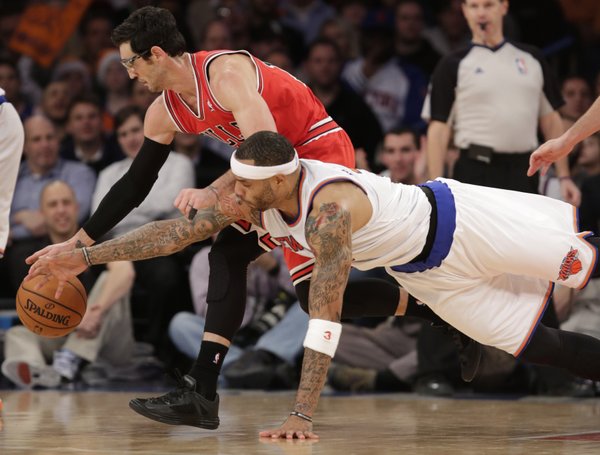 Turnovers aren’t, um, an ideal basketball play. But their entertainment value can be off the charts.

And Chicago's Kirk Hinrich had the best/saddest reaction to a missed pass in the history of basketball:

Poor Kirk went full Charlie Brown after the turnover, so the folks at SBNation.com paired the video with the most appropriate music ever. 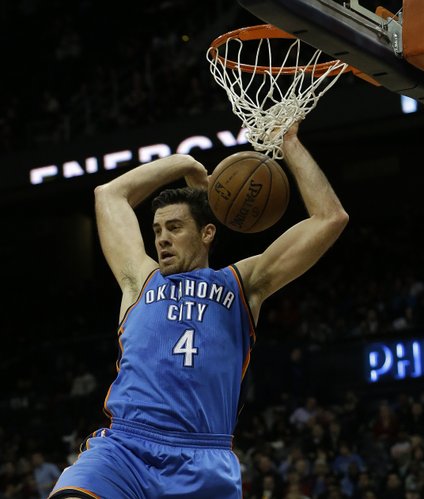 How does a player with career averages of 6.7 points and 5.8 rebounds earn the distinction of “No-Stats All-Star”?

Remember, kids, setting screens and taking charges can be cool, too:

"That's one of the toughest parts of my job."

On watching the Morris twins before a game, from ESPN’s Danny Chau:

Paul Pierce on his move from Boston to Brooklyn, via Andy Vasquez:

"I'm a guy that when it's time to move on you move on. You can ask any girlfriend I've ever had."

Darrell Arthur, on a hidden talent, via DenverStiffs.com Q&A:

I like to bowl, I learned to bowl in college. I'm really fascinated with spinning [the ball]. When I get out there I just have fun with it, I'm not that good, but I like to get out there and bowl.

On Thomas Robinson during Portland’s game against Utah on Monday, from BlazersEdge.com:

If Energy Solutions Arena was a Jazz bar tonight Thomas Robinson did the equivalent of busting down the front door and swinging a gunny sack full of bowling balls through the entire combo.