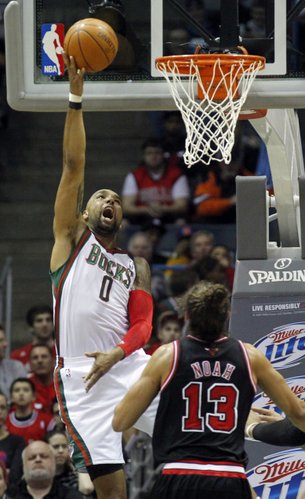 Milwaukee Bucks' Drew Gooden (0) puts up a shot against Chicago Bulls' Joakim Noah (13) during the first half of an NBA basketball game, Wednesday, March 7, 2012, in Milwaukee. by Nick Gerik

Gooden's two three-pointers were also something of a rarity, though he accomplished that feat back on Feb. 10. On at least one of his triples Wednesday, Gooden benefited from some ... ahem ... questionable defense by Chicago's Carlos Boozer: 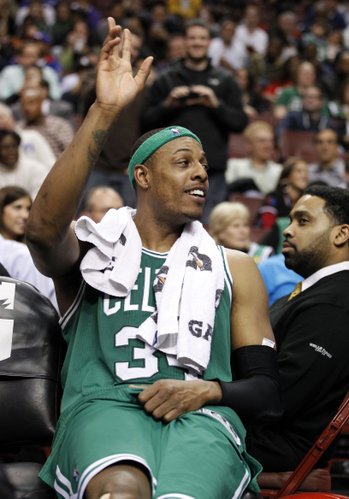 Boston Celtics forward Paul Pierce (34) waves from the bench to the fans during the second half of an NBA basketball game with the Philadelphia 76ers Wednesday, March 7, 2012 in Philadelphia. The 76ers won 103-71. by Nick Gerik 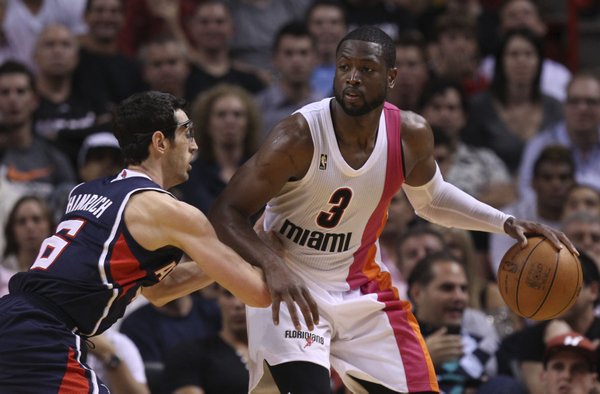 Atlanta Hawks' Kirk Hinrich (6) guards Miami Heat's Dwyane Wade (3) during the second half of an NBA basketball game in Miami, Wednesday, March 7, 2012. The Heat defeated the Hawks 89-86. by Nick Gerik

After the game, Hawks coach Larry Drew talked to reporters about Hinrich, who is shooting just 35 percent overall and 27 percent from three-point range since returning from offseason shoulder surgery at the end of January:

“I think it is just a matter of him really getting his legs under him with his surgery. When he came back we tried to bring him along slowly and we knew it was probably going to take a while for him to really get his rhythm, his timing and really needing time to get his legs under him. He has had some games where he has shot the ball really well and then he has had some games where his shot has been short and off. I still think he is still kind of in that training camp mode.” 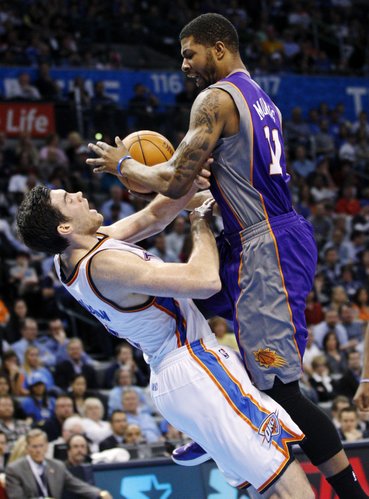 On Thursday, against the Dallas Mavericks, Markieff saw just six minutes of playing time and didn’t get a shot off. The Suns won, 96-94, and Markieff was replaced down the stretch by Hakim Warrick. Markieff’s only contributions to the stat sheet were a foul and two turnovers (full stats here). 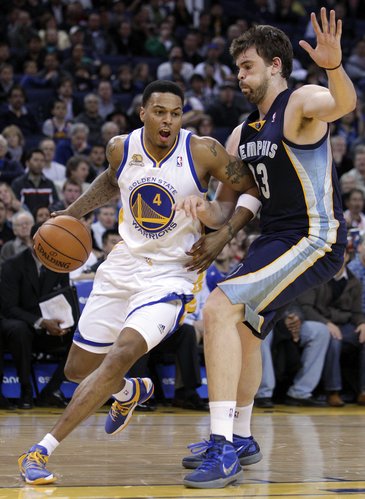 Four of Rush’s five made shots came from inside the arc, something that Warriors coach Mark Jackson doesn’t mind seeing from the three-point specialist. From the San Francisco Chronicle’s Vittorio Tafur:

"He's more than just a stand-still shooter," Jackson said. "He does a very good job picking and choosing his spots and doesn't put himself in position to get hurt and make careless turnovers."

The book on Rush was that he was a poor ball handler at Indiana, but Jackson has his own scouting report since the Warriors traded for Rush in December.

"I like the way he's putting the ball on the floor and making plays, whether it be pick-and-rolls or guys running at him because he's a shooter," Jackson said. "He's certainly showing he's comfortable doing that."

When it came time for OKC coach Scott Brooks to sub in a backup center in the second quarter, he went with veteran Nazr Mohammed instead of Aldrich. Mohammed played just four minutes, and was scoreless with two rebounds. The three Thunder bigs not named Serge Ibaka played a combined 38 minutes as OKC went with a small lineup in the second half.

Selby’s seen stints of five, five and six minutes in three of the Grizzlies’ last four games. During that same time, combo guard O.J. Mayo has taken over the brunt of the backup point guard duties. From the Commercial Appeal:

(Grizzlies coach Lionel) Hollins said the decision to go with Mayo has more to do with matchups than his dissatisfaction with Pargo and Selby.

"It depends on the opponent," Hollins said. "Like in the Dallas game (Feb. 29) I didn't feel like they were going to come out and pressure us so we just ran our zone offense. It was no problem. But when you're playing a team that's pressuring you and you're trying to get into good offense then maybe you go with one of the other guys."

The Celtics are prepared to entertain offers for Paul Pierce, whose subtraction from the Boston core would be the most advantageous to the post-Big Three rebuilding effort given his age (34) and the $32 million he's owed over the next two seasons. And for those same reasons, he'll be the most difficult of Boston's top four players to move.

The Hawks won't find a taker for Joe Johnson and the $90 million he has coming to him over the next four years, but rival executives believe Kirk Hinrich could be on the move -- perhaps filling the gaping two-guard hole on the Clippers. That depends on the asking price, as the Clips' assets were diminished in the Chris Paul trade.

An excerpt from the full story, which you can read here:

During All-Star weekend, he received compliments from some of his colleagues around the league, but nothing that stuck out. He's been more excited to receive text messages offering praise and encouragement from his "other family" at Kansas, especially those from assistant coaches and head coach Bill Self.

Still, Chalmers carries a chip on his shoulder, the one that formed back in Alaska, where he eventually surprised many people by becoming the state's third NBA player.

"Way more people told me I wouldn't make it than that I would make it," Chalmers said.

"They probably hide from me," he said.

Nice pic of The Truth adjusting his offense :)