The week that was: Markieff Morris nets career-high; Brandon Rush blows up; Josh Selby sent back to D-League 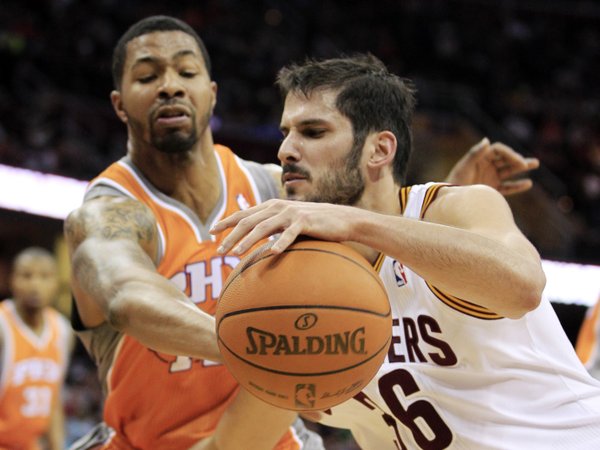 After starting off his NBA career scorching hot — 9.2 points per game on 49.3-percent shooting, 58.3-percent threes in his first 10 games — Keef hit the proverbial “rookie wall” and cooled off to less impressive 38.9-percent overall and 38.1-percent three-point averages for the season. Part of that is due to a freezing cold 10-game stretch during February and March, in which he shot just 22.2 percent from the field during a 10-game stretch. In 15 March games, Markieff has averaged just 5.0 points, 37-percent shooting and 30 percent three-point shooting.

The good news is that the Suns are close to breaking into the tight Western Conference playoff race. After Wednesday’s games, they were 25-26, sitting in 10th place, yet only 4.5 games back of the fourth place team in the conference (top eight advance to the playoffs). 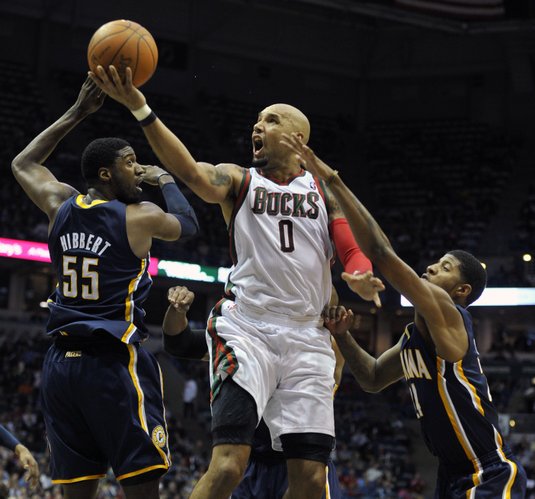 Indiana Pacers' Roy Hibbert (55) and Paul George defend as Milwaukee Bucks' Drew Gooden (0) drives to the basket during the first half of an NBA basketball game on Saturday, March 24, 2012, in Milwaukee. by Nick Gerik 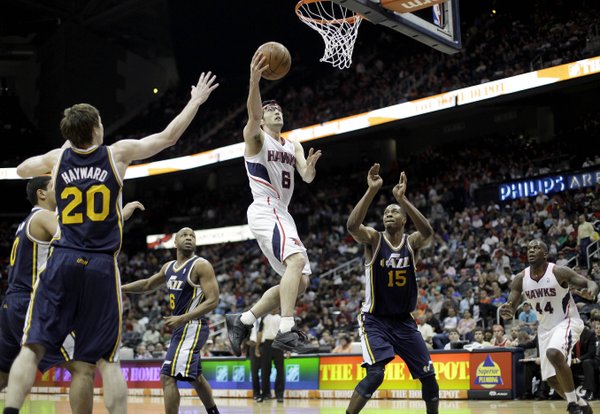 Atlanta Hawks' Kirk Hinrich (6) puts up a basket between Utah Jazz' Gordon Hayward (20) and Derrick Favors during triple overtime of an NBA basketball game, Sunday, March 25, 2012, in Atlanta. Atlanta won 139-133 in the NBA's first quadruple-overtime game since 1997. by Nick Gerik 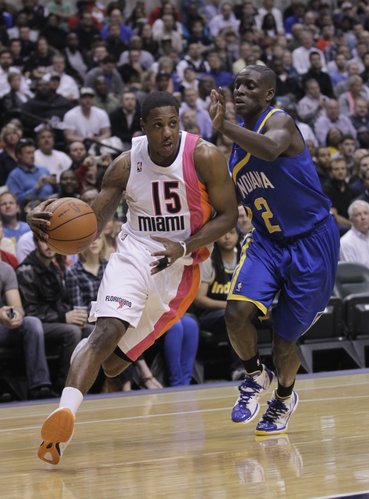 One of those games came on Monday in a 105-90 loss to the Indiana Pacers, when Chalmers heated up for 13 points in 27 minutes. Chalmers coughed up the ball three times in the first quarter before settling down, and he finished with four rebounds, three steals and a single assist (full stats here). In the two games before that, Chalmers put up a pair of three-point duds. He shot 1-for-5 with two rebounds, two assists, a block and three turnovers in 25 minutes during a 103-87 whooping at the hands of the Oklahoma City Thunder on Sunday (full stats here). And on Friday, March 23, Chalmers was 1-for-7 with one rebound, four assists, three steals and a turnover in 31 minutes as the Heat beat the Detroit Pistons, 88-73 (full stats here).

Chalmers’ struggles are a bit concerning for the Heat, especially as the postseason approaches. As the Sun Sentinel’s Ira Winderman wrote after Monday’s game:

Chalmers simply has to be play well, because he's the Heat's only playoff-level point guard. 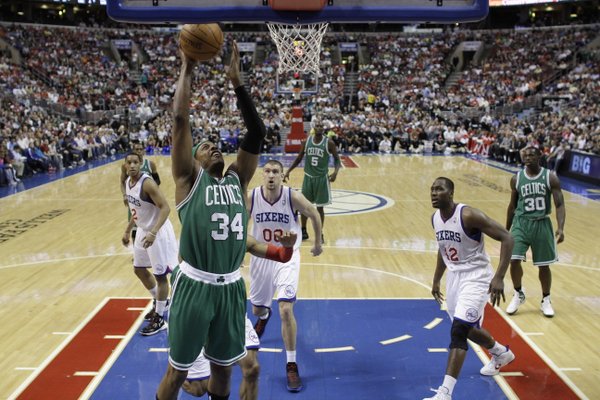 Highlights of Pierce blowing up the Bobcats: 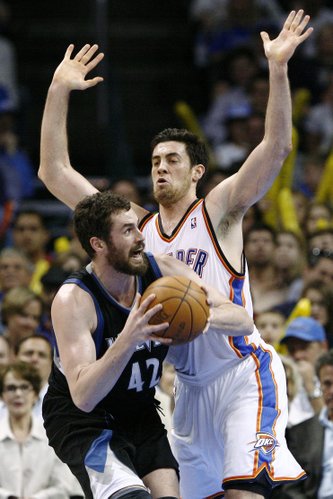 Collison made an equally important play at the end of the first overtime, when he set a monster screen for teammate Kevin Durant, who drilled a game-tying three-pointer. And this play, unlike the block on Love, got the patented Nick Collison “badass screens with a Rick Ross track playing over it” treatment:

Collison followed up his highlight-reel game with a pair of quieter performances in victories on Sunday and Tuesday. On Sunday, Collison had two points and two assists in 18 minutes as the Thunder beat the Miami Heat, 103-87 (full stats here). In 19 minutes on Tuesday, Collison scored six points with one rebound in a 109-95 win over the Portland Trail Blazers (full stats here). 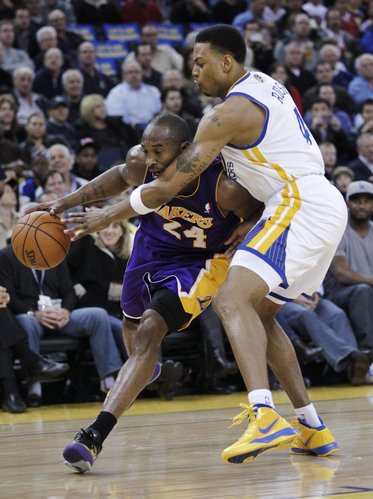 After Tuesday’s game against the Lakers, Warriors blogger Adam Lauridsen lauded Rush for his defense on Kobe Bryant and wrote:

With Monta Ellis gone, Brandon Rush is now the most capable penetrator on the team. That may not be saying much, but it’s an important role nonetheless. When the Warriors are struggling to connect from behind the arc, they need Rush and others to look for higher percentage looks. That was exactly what Rush did during his monster second half — storming his way to 21 points in just over 21 minutes. The energy and aggressiveness Rush brought to the team was infectious. Much like McGuire, Rush’s defensive effort — blocking shots and closing out on perimeter players — helped spart a quick pace at the offensive end. The Warriors climbed back into the game starting from the inside and working out, and by letting their defense generate offense. That’s how good teams recover from cold stretches or hot opponents — not looking to win it all back in a few easy-way-out threes, but by chipping away at it through stops, work in the paint and trips to the line. The Warriors — and Rush in particular — deserve credit for fighting the right way against the Lakers despite the early, discouraging deficit. 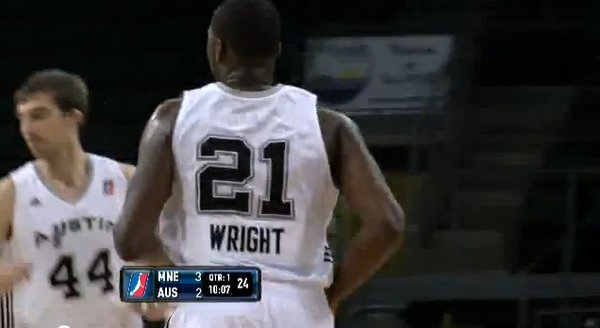 How about we start a new team that consists of only former Kansas Jayhawks?

Call them the Kansas Superhawks or something.

KC should give up on getting an NBA team and go after a D-League team. The NBA really looks to be better utilizing it as a way to develop their young talent. The atmosphere at those games aren't great, but there are still some really good players on the floor.

I think minor league basketball is great, baseball and hockley had it for years, fun to watch, reasonable prices, and see some future greats

Gee... instead of benching it or D-leagueing it - Selby could have been a starter on a final four team and a lottery pick.

I was as tough on Selby as anyone, but honestly we can't blame a teenager when they're offered a bazillion dollars to go pro. It's the damn NBA and politics and probably Walmart is to blame somehow too, but someone has to figure out a way to keep these kids around for AT LEAST 3 years - for exactly the reasons that you have stated.