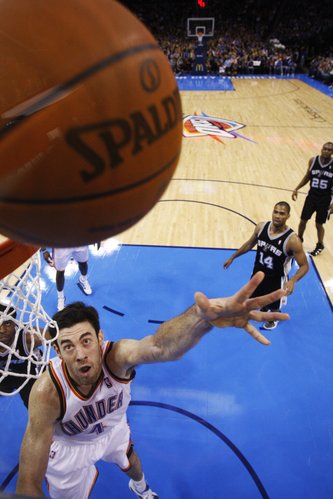 And those dunks? From the Oklahoman’s Darnell Mayberry:

Collison recorded his first double-double of the season tonight, and he can thank Matt Bonner. Collison absolutely abused Bonner on the offensive end, torching him for eight of his 10 points in a 2 minute, 14 second span early in the second quarter. Spurs coach Gregg Popovich couldn’t yank Bonner quick enough.

Mayberry then goes on to say:

Remember that game against San Antonio last year where Bonner killed the Thunder from 3? The Thunder just learned that its best defense for Bonner is Collison’s offense.

Columnist Berry Tramel (also of the Oklahoman) wrote a nice piece on Collison and how the vet has been able to play more aggressively this season. If you have a few minutes, give it a read.

Markieff’s three triples puts his long-range shooting at 12 for 21 (57 percent!) on the season. Coming into Sunday’s games, his 53 percent was ninth best in the entire league. (Side note: right behind Markieff, in 10th? Brandon Rush of the Golden State Warriors, who has shot 11 for 21, or 52.4 percent.)

Before the game, Thunder coach Scott Brooks spoke a bit about how he plans to use Aldrich and the rest of the OKC reserves this season. You can read his quotes on the official Thunder website.

Milwaukee starting center Andrew Bogut, who missed his fourth game in a row on Sunday, is expected back soon, according to his manager. The Bucks play the San Antonio Spurs on Tuesday.

That means Morris occasionally peaks around the bend in his learning curve before the coaching staff has time to install the training wheels.

Now he needs to focus on not being just a shooter in order to become an effective starting-level talent in this league. Morris is such a good shooter that it would be easy -- and wrong -- to look only for pick-and-pop 3s. He has to find a way to bang inside for a bucket or a foul. He's a big, strong man who is a much better low-post scorer than many people realize. So he needs to take advantage of it.

You can read the whole article at ESPN.com (Insider subscription required).

None! Enjoy the BCS title game.

I'll be passing on the Sausage, Egg, and Cheese (SEC) Championship game tonight. Call me when the BCS is gone

Me too! I don't want to give them any more ratings.

Nick, another great job on the NBA section. Love how you indicate when the highlights actually begin for the KU players on the youtube videos provided. Keep it up.

I went to Tulsa and saw the 66er's Sunday. Brady did a great job and looked very comfortable on the floor.

He had a real nice assist that lead to the dunk of the game.

Josh Selby playing in a whole different type of court... He was busted for marijuana in Maryland. Has to go to court on January 25.