Drew Gooden for three! plus Saturday recaps and overseas updates 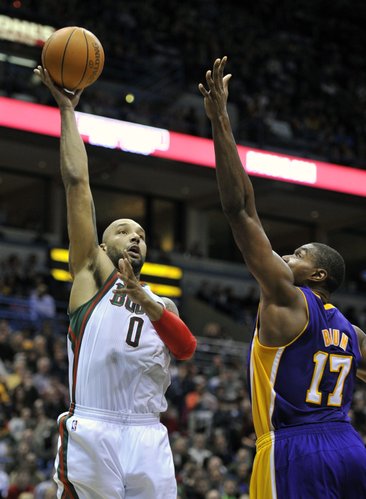 Milwaukee Bucks' Drew Gooden (0) shoots the ball over Los Angeles Lakers' Andrew Bynum (17) during the second half of an NBA basketball game on Saturday, Jan. 28, 2012, in Milwaukee. The Bucks defeated the Lakers 100-89. by Nick Gerik

Drew Gooden (Milwaukee Bucks) was the star of the show for the Bucks again on Saturday night as he led the team in scoring (23 points for the second night in a row) and rebounds (eight) in a 100-89 victory over the Los Angeles Lakers. Gooden made 9 of 15 shots in 35 minutes and added his fourth three-pointer in as many games (the first such stretch in his 10-year NBA career).

After the game, Gooden talked to reporters about his out-of-nowhere three-point shot (he’d hit just 7 of 65, or 10.7 percent, in the six seasons prior):

"I've been working on that day-in and day-out, and the best thing I like about it is Coach is giving me the confidence to shoot it. Shooting percentages increase when you know you have the coach behind you and know that if you miss it you won't come out of the game. So I have to thank my coach and my teammates for having the faith in me shooting that three, and it is helping our offense. It's helping us spread the floor, and it's helping us drive and penetrate and get it to the open man."

Gooden was effective from inside the arc too, scoring 14 points in the third period alone, including six straight points in a two-minute span at the end of the quarter (full stats here).

BrewHoop.com’s Alex Boeder wrote about Gooden after the game:

If nothing else, Gooden is wildly consistent in his tendency to amuse. In the best of times and in the worst of times, his play is uniformly evocative. Tonight he built on his comfortable league lead in passes off the backboard to himself (did not work out this time), and managed to pick up a technical for glaring down an official after cruising to the hoop for a basket.

Defensively, he was also game. Andrew Bynum is just massive, and not light on talent either, but Gooden gave it his all. On one play in the first quarter, Bynum had established strong position in the post, so Gooden tried to reach around to steal the entry pass. While he was not quick enough to get to the ball, he was quick enough to recover and deliver a hard, decisive foul that didn't allow Bynum a good look at the basket and instead forced him to the stripe.

Good thing Markieff has one of the league’s most creative point guards on his team:

I wonder if Gooden has talked at all with Bucks coach Skiles about the KU v. Michigan St. game in 86, elite 8 I believe with the infamous clock malfunction? KU needed every one of those extra seconds to beat Skiles and the Spartans. I know Gooden didn't play then, probably is too young to even remember that game, but I'm sure Skiles remembers it.