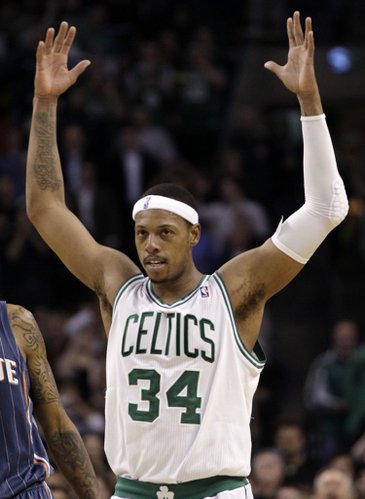 Boston Celtics forward Paul Pierce acknowledges the crowd after passing Larry Bird for the No. 2 spot on the team's career scoring list, during the second half of an NBA basketball game against the Charlotte Bobcats in Boston on Tuesday, Feb. 7, 2012. by Nick Gerik

Before that pivotal three-pointer, Pierce had made only 3 of 11 shots and had missed all five of his attempts from beyond the arc.

He told ESPNBoston.com that the pressure of the record had something to do with his shaky shooting:

"I'm not going to lie, it was hanging over my head too much," Pierce said of his first-half struggles. "How could it not? With every deep breath that the crowd was taking, every shot that went up, it was just like, you could just feel it. And it was hard to really ignore it and really focus on the game.

"Then Coach (Doc Rivers) said, 'Hurry up and get it out of the way.' It was a relief once I hit that one 3, so I could really concentrate and focus on the game."

The Celtics went on to win, 94-84, against the Charlotte Bobcats, and Pierce added eight rebounds and nine assists to just two turnovers (full stats here).

After the game, Pierce talked about what the accomplishment meant:

But how exactly did Pierce pass Bird’s scoring mark? As the Boston Globe’s Gary Washburn pointed out, it was that same three-pointer that put Pierce over the record. Bird made 649 triples in his career, while Pierce, to this point, has made 1617.

Of course, there were some blemishes too. From BrewHoop.com:

Drew Gooden. Nevermind the airball hook, the unsuccessful pass-off-the-backboard to himself followed by a flagrant foul, the walking off the court out of the way of a Marcin Gortat dunk, or the getting his layup blocked followed by getting his own rebound and immediately airballing a fadeaway. Okay, do mind all of that.

But Gooden hit for 25 points, marking the the fourth time in seven games he has scored 23+ points. And he often looks like the most viable and valuable source of offense around...

Collison had the typical Nick Collison type of game. I thought his rebounding and screens were difference-makers.