Before the game, Warriors coach Mark Jackson said that although Rush has played well enough to start, previously slumping starter Dorell Wright has been better lately, and Jackson values Rush’s consistency off the bench.

Even so, Rush’s play is still preferable to some Golden State fans.

That's the difference betw Brandon Rush and Dorell Wright. Rush got a free reb, had 5 Jazz looking at him, waiting to shoot. Reset to top. 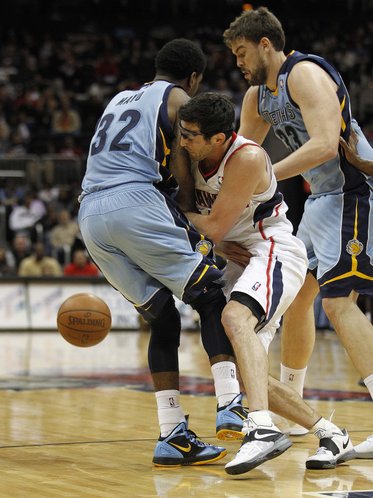 Atlanta Hawks guard Kirk Hinrich, center, loses the ball as he collides with Memphis Grizzlies' O.J. Mayo (32) in the third quarter of an NBA basketball game on Thursday, Feb. 2, 2012, in Atlanta. Memphis won 96-77. by Nick Gerik

If Marcus does play for the Rockets on Friday (doubtful as that might be), it would be against the Phoenix Suns and twin brother Markieff, setting up the first (-ever?) Morris v. Morris battle. If not, at least the twins got some quality time together on Thursday.

“We feel like he can be a good player as a power forward in our league,” says Rosas. “But he’s got the potential to be a great player in our league as a small forward.”

And later, when asked about Marcus’ future in the D-League:

“We’re investing a lot in his defense as a small forward and want to make sure that he gets enough opportunities to guard smaller players off the dribble, to chase guys off screens and to be more effective,” Rosas says. “But we feel good in that he’s a guy who works hard, values the game and is just tough; anybody’s who been around him knows he’s got an edge to him. He’s tough, he doesn’t back down and that shows up in his defense and in his rebounding – he’s a guy that will go out and get it.

“We feel as though he’s got some unfinished business left in the Valley. We had some objectives and some goals that we want him to accomplish while he was there. Unfortunately the injury slowed that down a bit but, again, our focus is on developing through playing. He’s worked hard and gotten healthy to a point where he’s going to be back on the floor but he’s a player that, for the objective and goals that we have for him, he’s got to get on the floor and play and there’s only so much you can do in practices here at the NBA level. We don’t want to stunt his growth and we’ve done this time and time again with the Patrick Pattersons of the world, with Aaron Brooks, with guys who need to play to develop and get better so that when they get an opportunity at the NBA level, they’re much more productive and effective NBA players.”

You can read the whole breakdown here.

"I think people are getting caught up in his shooting, but he's also been an outstanding rebounder and defender for us, and he's had a calming effect on our offense," the coach said. "He was bad in the first half (Tuesday night). He made mistakes and had breakdowns probably for the first time since he's been here. But when I put him in in the third quarter, I just said to him, 'OK, make it right.' And he did. He's been great since we've had him."

This 'Hawks in the NBA' feature is a favorite feature for me. Nick is doing so well with it that I feel disappointed when only the old one-line summaries show up.