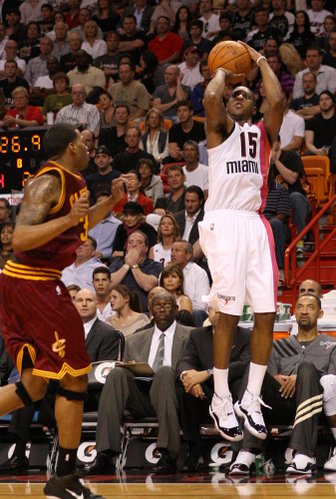 Mario Chalmers shoots over Alonzo Gee during the second quarter of the Cleveland Cavaliers vs. Miami Heat game at the AmericanAirlines Arena in Miami on Feb. 7, 2012. by Nick Gerik

It could have been two more.

Mario Chalmers (Miami Heat) was selected as one of the six players in the All-Star Three-Point Contest. Brandon Rush (Golden State Warriors) was not.

Chalmers’ honor is well-deserved. He’s had the best shooting season of his four-year career and has hit 57 of 123 triples for a more-than-solid 46.3 percent average. In fact, Chalmers is ranked sixth in the NBA in shooting percentage, and he has the best average of players with 120 attempts or more.

Rush’s snub is bizarre for the same reasons. Rush, with his insane 54.8 percent average (40 of 73 treys), is the most efficient shooter in the NBA this season. But percentages didn’t seem to factor into the selection criteria, as Chalmers is the only top-20 shooter to make the contest. The other four honorees (not counting reigning champion James Jones, also of the Miami Heat) rank 1, 3, 13 and 28 in total three-point makes. Chalmers is tied for 7th in the NBA using that metric. Again, not counting Jones, just two of the other four contestants have a top-50 (!) three-point average.

After his selection, Chalmers tweeted:

Thanks you to the NBA and all my fans for selecting me for the 3 point shoot out. A dream come true

Rush took to Twitter with his disappointment, but was gracious in congratulating his former teammate, Chalmers, tweeting a simple “congrats on making it bro.”

Feel bad for Brandon Rush. He's done a great job rebuilding his rep in Oakland. Would have been a nice acknowledgment to be part of weekend.

But a little perspective helps ease the sting. From Kelly Dwyer of Yahoo Sports:

... It's a silly exhibition. It's meant to offer a litany of storylines to showcase on basic cable on a Saturday night in February. Hemming and hawing over this list -- even if it features two All-Stars in (Kevin) Love and (Joe) Johnson who are shooting at the league average from behind the three-point line -- is a bit much at this point. As it stands, the NBA has put together a well-rounded list of participants planned to check all the respective boxes, all with a good chance to win. 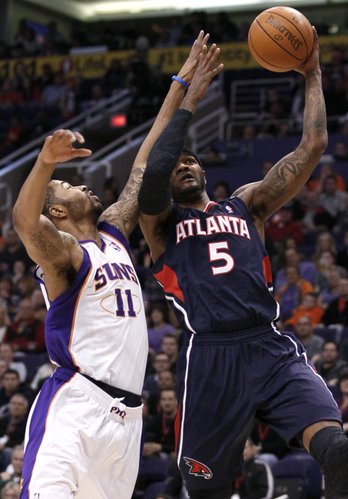 Atanta Hawks' Josh Smith (5) shoots over Phoenix Suns' Markieff Morris (11) during the first half of an NBA basketball game on Wednesday, Feb. 15, 2012, in Phoenix. by Nick Gerik 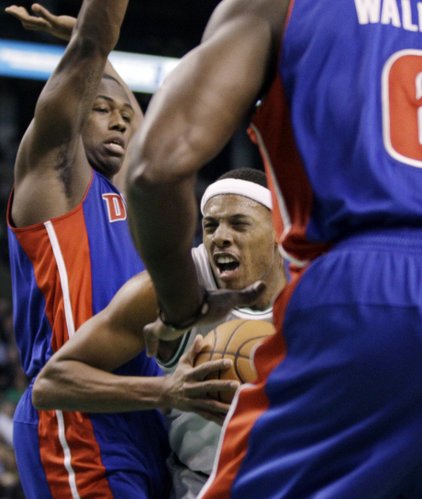 Boston Celtics forward Paul Pierce drives with the ball against Detroit Pistons guard Rodney Stuckey, left, and center Ben Wallace (6) in the second half of an NBA basketball game in Boston, Wednesday, Feb. 15, 2012. The Pistons won 98-88. by Nick Gerik

As always, Alex Boeder of BrewHoop.com had the court-side perspective:

First, Gooden, who tossed two straight airballs, delivered a particularly bad outlet pass, and suffered from a questionable shot selection and defensive stance. But he continues to work hard in spite of a sprained wrist and probably some other nagging aches and injuries that he shied away from specifying after the game (instead saying everyone has injuries). He never makes excuses, and keeps plugging away at a position that he is very obviously not suited to play. Gooden is a reasonably capable power forward, but instead starts at center, often guarding real centers, and not only that, but is tasked with supplying a good portion of the offense every night. When you see the player after the game, feet soaking in water, icebag on wrist, drained, you see another side.

During the game, ValleyoftheSuns.com’s Michael Schwartz commented on Hinrich’s impact on the defensive end:

Brady Morningstar (NBA D-League - Tulsa 66ers) spoke to the Journal-World’s Tom Keegan about his experience in the developmental league:

They need to send Cole down to the D-League if they aren't ever going to play the guy. At least that way he gets some playing under his legs. Or maybe OKC should trade him.

What reputation does Rush have to repair? His is no worse than Chalmers, that's for sure.