Brandon Rush (Golden State Warriors) continued his revitalization out west Wednesday. On a night when the Warriors were missing star guard Stephen Curry, Rush helped push the team past the New York Knicks with 19 points (on 7 of 13 shooting), six rebounds, two assists, two steals and two blocks in 26 minutes off the bench (full stats here).

Rush sparked a Warriors run in the third quarter, when he had 12 points, two threes and two steals. He played 21 of the 24 minutes in the second half as the Warriors outscored the Knicks 55-35.

With the way Brandon Rush is attacking the Knicks, you'd almost think one of their scouts blew out his knee in an illegal predraft workout.

In the season's first three games, Rush has averaged two blocks per game. One of tonight’s ended up on the NBA.com highlight reel.

Rush also had a couple other highlights, including a nifty layup (1:17) and a buzzer-beater three (1:34):

After the game, Chalmers spoke about his turnaround. From the Miami Herald:

“[Tuesday] night was just a rough game for me,” Chalmers said. “I’m not making any excuses. I know I can play better than what I did [Tuesday]. I just came out and my teammates told me to be aggressive, and that’s what I did.”

Later in the article, both Chalmers and Heat coach Erik Spoelstra acknowledged that the team will take a hot-hand approach to the point guard position this year. So in other words, right or wrong, this won’t be the last we’ll hear about a point guard controversy in Miami. Read on.

Mayberry elaborated in his game notes:

... that block came against Marc Gasol on Aldrich’s first defensive sequence. Aldrich then won a jump ball against Gasol. And he hit the floor twice for loose balls. He also had a tap out that landed in the wrong hands but characterized how active he was in keeping plays alive. 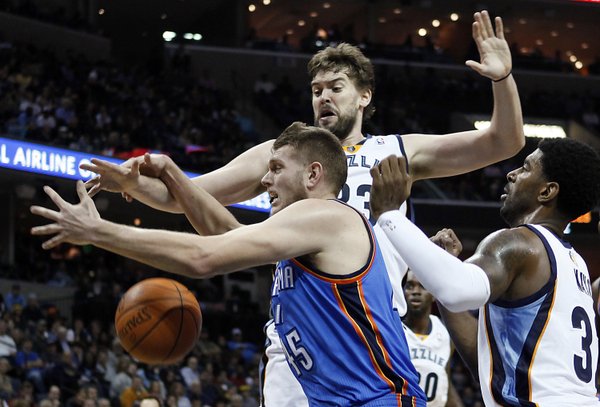 Memphis Grizzlies' Marc Gasol, back, and O.J. Mayo, right, try to get a rebound against Oklahoma City Thunder center Cole Aldrich (45) in the first half of an NBA basketball game Wednesday, Dec. 28, 2011, in Memphis, Tenn. The Thunder won 98-95. by Nick Gerik 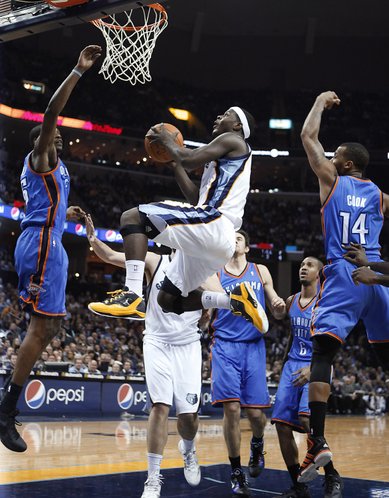 Memphis Grizzlies guard Josh Selby goes to the basket between Oklahoma City Thunder defenders Kevin Durant, left, and Daequan Cook (14) in the second half of an NBA basketball game Wednesday, Dec. 28, 2011, in Memphis, Tenn. The Thunder won 98-95. by Nick Gerik

Sixers blogger Dei Lynam caught up with Markieff and Phoenix coach Alvin Gentry on Wednesday. Gentry offered a glowing review of his rookie:

Before the game, Gentry also praised Markieff’s work ethic, saying: "He wants to be a great player so he does a great job of listening."

"Greg is a big asset both physically and mentally. Having a player with Greg's experience is invaluable for these developing players. I hope that Greg is able to use this opportunity with the Legends to create one more opportunity at the NBA, similar to what Antonio Daniels was able to do last year,” said Head Coach Del Harris.

The Legends play tonight at 7 p.m. before taking on Brady Morningstar and the Tulsa 66ers on Friday at 7 p.m. You can watch both games (for free!) at nba.com/futurecast.

This is one of the more enjoyble features of the LJW sports page. It would have been nice if the highlights had showed a few more of his 19 points, but It looks as though Brandon landed on a pretty good young team. Good luck to him and the Warriors.

Brandon Rush is a testament to why staying longer in college makes for a better, more versatile player. And not just staying longer, but playing the college game in general (and under Self specifically). It makes me so happy to hear sportswriters lauding his "trademark defense," which he not only developed the skill for from Bill Self at KU, but the love for as well. I remember his sophomore or junior year in an interview he said he actually liked playing defense more because it was more of a challenge for him. This was a guy that originally wanted to skip college ball altogether, and now it's made him into a well rounded NBA player that can make major contributions.

Nick, Thanks again. This page has been a great addition to KUSports.com for Jayhawk fans.

Dude is doing a nice job with these articles. Thanks and keep it up!

Love the video of Markieff giving back to the single moms in Phoenix. He sure has matured alot since he walked onto the KU campus.

amaldy, I was thinking the same thoughts you wrote. The Morris boys have grown far beyond themselves as they have departed University of Kansas. I am so proud of them and Markieff, WOW! From two immature kids coming in from Philly to marque players of last years team and now making the splash in the NBA. It's great to be a KU fan!!

Oh and as others have mentioned, I love reading this page. This is an awesome addition to the site!!

Love these articles as well as all the videos & hyperlinks provided. Many Thanks!

Here is the full Miami Herald article on Mario, in case you are interested... http://www.miamiherald.com/2011/12/29/2565016/miami-heats-mario-chalmers-bounces.html

If you have time warner - NBA TV is free until 1/8 - its been fun to watch these guys play. GREAT PAGE HERE!! THANKS!!!

+1 on AT&T U-Verse, which I have in Kansas City. It's indeed been fun flipping around. Not sure how long the league pass is free, but it's a pretty sweet deal for now. Nick, great job of updating this blog at machine-like frequencies. Enjoyable reading!

Very good news on some of our favorite Hawks! Sounds like Rush is finally in a good spot, and I hope that Cole is able to fight and earn some more PT this year. It sounds like his coach really likes his work ethic and so do the local writers. Also glad to hear the glowing reviews on Kieff's game and his contributions to the community. Hopefully Marcus can get on the floor a little bit and show what he's made of, too. Look forward to seeing him here in Houston.