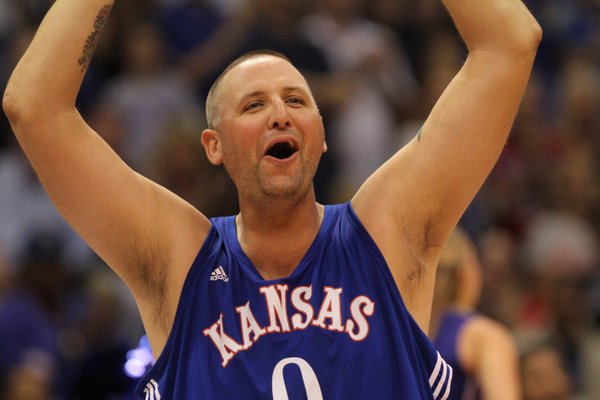 Former Kansas University center Greg Ostertag gets a big ovation as he is introduced before the Legends of the Phog alumni game Saturday, Sept. 24, 2011 at Allen Fieldhouse. by Nick Gerik

Former Jayhawk and Utah Jazz center Greg Ostertag signed with the NBA D-League’s Texas Legends on Tuesday, according to the Dallas Morning News. Ostertag, who averaged four points, five rebounds and almost two blocks a game in 11 years in the NBA, will play his first pro game since 2006 on Thursday. And then, at 7 p.m. on Friday, Ostertag and the Legends will take on Brady Morningstar and the Tulsa 66ers.

From the Morning News:

"I missed playing," Ostertag said. "I shouldn't have quit when I did and I feel like I got to give it one last shot to see if I can make it happen.

"I know there's a lot of naysayers out there who think I couldn't play when I was younger and how am I going to be able to play now? But I'm going to give myself a month or two to get in really good shape and see what happens." 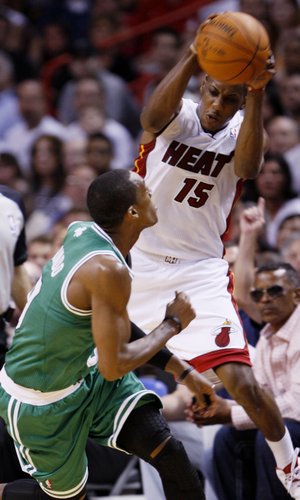 Miami Heat guard Mario Chalmers (15) attempts to keep the ball in bounds as he is guarded by Boston Celtics guard Rajon Rondo during the first half of an NBA basketball game, Tuesday, Dec. 27, 2011, in Miami. by Nick Gerik

Mario Chalmers (Miami Heat) isn’t a stranger to fighting for playing time in Miami, but he didn’t do himself any favors in that battle on Tuesday night against the Boston Celtics. Chalmers started but played only 18 minutes while scoring four points with five steals, three assists and two rebounds. Chalmers also turned the ball over six times (four straight times during a 1:20 span in the third quarter). He was also benched for the entire fourth quarter in favor of surging rookie Norris Cole, whom Heat teammates and coaches credited for the team’s victory. Cole played 29 minutes, scored 20 points (14 timely points in the fourth) with a handful of rebounds, assists and steals and only three turnovers (full game stats here).

Chalmers, in fact, represented one of the few sobering realities of this one, with his confounding inability to launch an alley-oop pass on target, and his continuing inability to keep Rondo on front of him.

While Spoelstra has no immediate intentions of starting Cole, this could be a case of Chalmers attempting to make that decision for him.

Man, I like Norris Cole as a reserve, but Mario Chalmers is gift-wrapping the starting gig to the rook.

And ESPN columnist Jemele Hill tweeted something similar, which was echoed by numerous other Heat fans and media types alike:

Dear Mario Chalmers: It was fun while it lasted -- Signed, Your Starting Position

All snark aside, it’s clear that the excitement Cole has been generating — combined with Chalmers’ poor play — has people talking about a change.

Even so, Heat coach Erik Spoelstra wasn’t ready to demote Chalmers immediately after the game, according to the Miami Herald:

“It wasn’t any kind of indictment on [Chalmers],” Heat coach Erik Spoelstra insisted. “He came back after struggling at the beginning of the third quarter and he did settle down and make some plays. That was good, to see him show some resolve and some toughness. That’s what we’ve done a lot of times. If a lineup is going, if a player is playing well, I won’t necessarily change for the sake of changing."

Not exactly a ringing endorsement for Chalmers, who wasn’t “playing well” on Tuesday. But we’ll see if it’s enough to force Spoelstra to shake things up just two games into the season — the Heat play again tonight.

In the movie Old School, a thirtysomething guy goes back to college and creates a frat with other old guys and they have crazy parties, and an overall awesome time. Sadly, my experience back at college was nothing like that. I lived in a plain two-bedroom apartment and most of my neighbors were college kids. I woke up and went to work out. Coach Bill Self let me work out with his players, and I went through a few full practices with the team.

Morris was the last player to leave Tuesday’s practice, and ended his session by working on catch-and-shoot three-pointers while on the move.

“I missed about eight in a row but that ninth one I made,” Morris said of his post-practice drill. “Coach has his faith in me to keep shooting and when I’m open I have to take the shot. He jokes about (Kansas ) Coach (Bill) Self telling me not to shoot.

Chalmers started slow last year, as well. The Heat finally got thier act together when Mario started playing well. One has to wonder how hard he works in the off season. Defensively, not many guys can stay in front of Rondo, but Mario never had the really quick feet on defense. He gets a lot of steals, but that is more due to good timing jumping into passing lanes. My guess is that he will lose his starting job sooner rather than later, but being a sub in the NBA isn't all that bad a gig. I won't be feeling too sorry for him.

Nick, these sections on Jayhawks in the NBA are great. Thanks for having these ready for readers like me 1st thing in the morning, and keep up the great work.

Great job reporting on start of the NBA season. These blogs are very informative and interesting!

Mario Chalmers has never been able to keep anyone in front of him.

Moving a bench scorer to the starting lineup could be self-defeating. Cole wouldn't have as many opportunities with Wade and James on court, and the second five won't have his points either when he sits out. Fans who never played up-tempo ball for 48 minutes seldom understand the need for some balance between starters and reserves – or the chemistry both units need to develop.

As far as that goes, neither do most players or quite a few coaches understand this. Not many NBA point guards could deal with multiple superstars as well as Mario does.

Makes me wonder if Ostertag is hurting for money.

Nick, you and Matt are a chip off the same block.... Great work!

Osterag is 38 years old. Don't see him playing very long. Wish him the best, though.

Maybe it was an oversight, but when you mentioned the OK and Memphis game tonight you didn't mention Xavier's name. Is he not playing either? Was also thinking, wow, there's more and more Jayhawks every year in the league to keep up with, although I wish there were three or four less this year. Can you imagine if we still had the Morris twins, Selby, and Xavier?

Xavier is still recovering from an ankle injury (http://probasketballtalk.nbcsports.com/2011/12/13/grizzlies-henry-out-for-month-with-torn-ankle-ligaments/). I haven't seen any recent updates, but if the original timetable is correct, he should be back in a few weeks.

Thanks Nick, if you ever need a kidney let me know.

No rook point guard will survive this years schedule on a championship team without a lot of help from a vet like Mario unless your first name is Magic.

Nick, time to storm into Keeg’s office and demand a bump in pay. You can use me as a reference.

I really don't understand the constant Mario-bashing in the NBA world. It seems like he is being constantly referred to as a weak link, someone who always drags the team down while he's on the floor. Other than his ill-advised turnovers (similar to Tyshawn's careless givaways), he is a menace when roaming the floor on D and it seems that nearly every one of his steals leads to a highlight-reel jam on the other end. Norris Cole had a great night and he might be a better long term option than Mario...but let's not crown him just yet. Both PG's seem to have a knack for rising to the occasion...hopefully Rio' can maintain his focus for all 48 minutes.