Will this be 'meat necklace' part two? 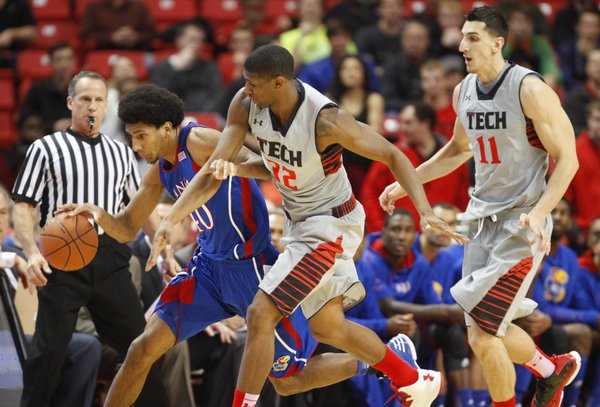 Kansas forward Kevin Young is fouled by Texas Tech forward Jordan Tolbert after grabbing a steal during the first half on Saturday, Jan. 12, 2013 at United Spirit Arena in Lubbock, Texas. At right is Texas Tech forward Dejan Kravic. by Nick Krug

• Defensive pressure: Texas Tech ranks fourth in Big 12 play in defensive steal percentage, swiping the ball away on 10.7 percent of its defensive possessions. The Red Raiders' season numbers are even better in the stat, as they rank 38th nationally (12 percent).

• Deep bench: TTU coach Chris Walker uses his reserves extensively, as 39.6 percent of his team's minutes come from the bench (27th nationally). The Red Raiders go 10 deep on their bench, so Walker's team might not be as affected by foul trouble as some other squads that come into Allen Fieldhouse.

• Slow tempo: After playing the non-conference season at a fast pace, Tech has slowed it down in Big 12 play to try to keep games closer. The Red Raiders are eighth in conference play in adjusted tempo, and a slow-it-down game is their best chance at hanging in the game with the Jayhawks.

• Carelessness: No Big 12 team has had a higher percentage of possessions stolen than Texas Tech, as opponents come away with steals on 11.6 percent of the Red Raiders' possessions. That could be trouble in Allen Fieldhouse, where steals often lead to quick transition points for the Jayhawks.

• Defense: Texas Tech has allowed the most points per possession in Big 12 play, allowing 1.12 points per trip to its foes. The Red Raiders struggle in quite a few areas, ranking ninth in the league in effective field-goal percentage defense, defensive rebounding percentage and defensive free throw rate. Forcing turnovers is about the only thing that Tech's defense does at an about-average level.

• Six-foot-7 junior Jaye Crockett (No. 30) is Texas Tech's best offensive player. Though he's a below-average three-point shooter (32 percent), Crockett has been one of the league's most efficient players inside the arc, making 57 percent of his shots there while shooting a high number of twos (103 of 181). Crockett thrives on close shots, making 77 percent of his attempts at the rim (NCAA average is 61 percent). Crockett also is the Red Raiders' best defensive rebounder, ranking 101st nationally in defensive rebounding percentage.

• Six-foot-11 junior Dejan Kravic (No. 11) is the second-best offensive option for the Red Raiders. The center takes 25.4 percent of the shots when he's in (406th nationally), and like Crockett, he's well-above average from two-point range (103 of 198, 52 percent). Kravic relies more on two-point jumpshots to score than Crockett, and he's talented in that area, making 41 percent of those shots (35 percent is NCAA average). Kravic also is a consistent rebounder, ranking in the top 260 in both offensive and defensive rebounding percentage while also blocking a high percentage of shots (104th nationally in block percentage).

• Six-foot-1 guard Josh Gray (No. 5) takes on the biggest offensive load for Texas Tech even though his production doesn't warrant that kind of role. He takes 26.6 percent of the Red Raiders shots when he's in (285th nationally), but he's been below-average from two-point range (84 of 189, 44 percent) and dreadful from three-point range (15 of 77, 20 percent). Gray also turns it over too often, as his 87 turnovers are 37 more than any other Red Raider. Despite his offensive deficiencies, Gray is TTU's best perimeter defender, ranking 24th nationally in steal percentage.

In 2008, Texas Tech coach Pat Knight's team lost to KU, 109-51 on the Jayhawks' senior night, with Knight giving the famous quote, "I feel like someone put a meat necklace around my neck and just threw me into a lions' den."

Though Monday night's game shouldn't be that bad, this still is a talent mismatch that will be played on KU's home floor.

Like the West Virginia game, KU's offense will have to worry most about keeping its turnovers down. If the Jayhawks do that, they shouldn't have any problem scoring ... or turning this game into a rout quickly.

Texas Tech is a poor rebounding team that fouls too often and has a lot of shots blocked. In other words, Jeff Withey should put up plenty of numbers on his senior night. Give me a double-double for him in a game where he probably won't play 30 minutes.

Man that 2008 team looks good - granted, that was against TTU, but still... easy to forget how loaded that team really was.

Hawk to Rock might as well be the Kiss of Death

If I remember right we had a good team that year

if they had played to their potential, they would have been great

It would take some kind of "miracle" for that team to win a title.

Gotta love the east coast bias. Dook looses and only drops one spot in the coaches poll none in the AP. nice.

I call espn the "All Duke - All the Time" network

This would be an excellent evening to make liberal use of Perry Ellis. jb pointed out yesterday that there may be one game in the tourney where he is relied upon very heavily .. Withey gets in a little foul trouble or KY .. either way, anything to help Perry get on an upward trajectory.

Andrew White too in case one of guards gets in foul trouble or gets hurt.

And this is dangerous game to me in the XTReme Age.

Losing it is a long shot on the order of TCU upsetting us, and since TCU rocked us, and we are an increasingly mature team, we are not likely to get upset.

But this is the kind of team with nothing to lose, and slow down style, that can often keep your good players out on the floor longer than you like.

KU is in a must win situation, while TTEch is in a let her rip situation.

Because it is an inconsequential game in the media marketing sense, the refs will very quickly swallow their whistles, after a few early calls to make it look good, to build up a safe cushion for broadcast fit; then our opponent will be tempted, even though he's a Billy Gillispie guy, to amp the below the waist contact waaaaaaay up to give his guys at least a shot and to give himself at least a chance at getting rehired. Its going to be a real test of collegiality. And if Gillispie thinks he was undercut, or betrayed by this Tech former assistant coach, then the Tech coach will really take off the gloves. If he does, then Self, who will not have amped the team for the game, will have to counter. It will be during this period, when the KU players have some separation and the hockey starts, that I have dreaded all season long. The KU players will likely be less than fully focused (what with no amping and an emotional pre game) and the Tech players will really be chucking and hacking to strip balls loose, which is their only chance for even a good showing. Add in that KU will shoot back to its average tonight, and a number of forces converge for a closer than talent would suggest score. This is a time when Tech players maybe emboldened, and KU players may get down because the shots are not falling; this is when KU players can get hurt in this game. I hate these late season games against mismatched teams in the XTReme Era, when we are the skinny guys.

If I am Bill Self and staff I am scheming not only to win the game for sure, but to figure out way a way to get out without an injury.

But if TTech can slow it down, and if the refs let them chuck and hack for say 10 minutes a half, and KU shoots back to an average that the can't justify giving the backups many minutes, well, that's when I fear the injuries.

Let's hope the starters can put them away early an let the subs play at least half of each half.

JB...that was a fantastic impression of stupidmichael!! CONGRATS and HUZZAH!!

The sequel "Meat Necklace Part 2" could be even more gruesome than the original...

If the passing is crisp and the trey percentage falls to 38%, its a meat necklace.

If the passing is not crisp and 3PT% falls to say 20-25% it will be a game, because Self won't have amped them for this one.

KU by 15, because of a cool night of shooting, no amp, and a muddy game.

The real question is: will we avoid injuries.