Will KU 'run Western Kentucky off the line' Friday night? 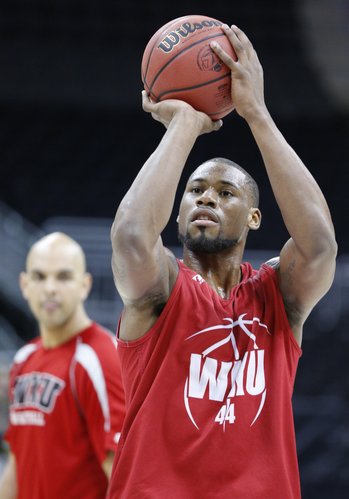 Western Kentucky forward George Fant puts up a shot during the Hilltoppers' practice on Thursday, March 22, 2013 at the Sprint Center in Kansas City, Mo. by Nick Krug

• For a refresher of Western Kentucky's strengths/weaknesses, check out the Five-minute Scout from March 17.

65.1 percent — The two-point percentage for WKU center Aleksejs Rostov. The Hilltoppers' tallest player also is one of their best shooters thanks to great shot selection. The freshman has made 84 percent of his shots at the rim according to Hoop-Math.com, which is just outside of a top-20 ranking nationally. Rostov doesn't shoot it often, putting up 16 percent of WKU's shots when he's in, but he's still a guy that KU can't ignore inside.

• 45.3 percent — Western Kentucky's three-point percentage in the second half of its last eight games. The Jayhawks would be well-served to try to open up a comfortable lead in the first half, as this WKU team has made a habit of playing well after halftime. In fact, three of the Hilltoppers' four victories in the Sun Belt tournament two weeks ago were come-from-behind wins.

• 192 — The number of three-pointers reserve Brandon Harris has shot this year, which is more than any KU player. Usually when huge upsets happen, an unexpected player has a hot-shooting night, and Harris would most likely be that guy for WKU. He's made just 33 percent of his three-point tries this year, but in a one-game setting, that number doesn't mean much. Harris definitely isn't hesitant to shoot threes (he's only shot 62 twos all year), so keep a close eye on when No. 12 checks in.

• Six-foot-3 guard Jamal Crook (No. 14) is WKU's best penetrator, and though he's not a threat from three-point range, he's a great passer, a good two-point shooter and a strong perimeter defender.

• Six-foot-6 George Fant (No. 44) is a good rebounder on both ends and a decent shot-blocker for his size, but he's not a great shooter, as his best offensive skill is drawing fouls inside (49th nationally in fouls drawn per 40 minutes).

While talking to Wisconsin's players in the locker room Thursday about their three-point defense, I heard one phrase constantly: "Run them off the line."

What the Badgers mean by this is pressuring offensive players on the perimeter to force them to drive. If opponents are going to take a three, it is going to be a tough one.

In essence, the Badgers want to funnel you inside the arc, where long jump shots are only worth two and are made at about the same rate as threes.

Pay close attention to see how well KU "runs WKU off the line" in this game. The Hilltoppers have had 10.6 percent of their two-point jump shots this year blocked, meaning KU's defenders funneling the Hilltoppers into the lane might not be a bad thing. We saw last week how poorly Kansas State performed offensively when its guards tried to take it over KU center Jeff Withey.

Three-pointers are the biggest danger for KU. The Jayhawks should force some turnovers and also should be able to get some second-shot opportunities.

If KU can limit three-point damage, it should be able to take control of this game in the first half.

WKU hasn't been afraid to take it into shot-blockers this year, making this an ideal matchup for KU center Jeff Withey. Big 12 teams tended to shy away from the big man, but sometimes, teams that haven't faced KU before need a few minutes against Withey before realizing how good he is defensively. Withey had five blocks in KU's NCAA opener against Detroit last season, and I see him having a similar defensive impact in this one.

Not to intrude on Jaybate's territory, but this merits a PHHOF!

"Run them off the line" is a great phrase. Thanks for sharing. WKU offense when they have one (Fant) in the paint and '4 on the line' looks just like something Wisconsin likes to do on offense too. Thanks for all the pregame work this week Jesse! And the Hilltopper clip is hilarious.

As a Badger fan, the one thing that they've been vulnerable to over the years has been 3 point shooters, like Curry, and Cornell a year later, who shoot well past the line. I'm a bit worried about the loudmouth punk who can also beat you from Mississippi today. I'm really hoping that they can shut him up by forcing him into an ugly 2-23 type of shooting stat line.

Boy do I wish I could be in KC today to see the Badgers and the Jayhawks a few hours later!

I hope you guys aren't having to watch this Wisconsin/Ole Miss game... Its a game that only a mom could love... It has gotten a wee bit more interesting, but someone should show Henderson the box score before he hits a shot (when is is 3-19) and runs up the court like he is all that...

I just hope the 'Hawks can soothe my wounds tonight! I'm at work and cursing computers that allowed me to witness that debacle.

I kept watching that damn game myself. What's up with that! Now I'm watching KSU stink it up when I should be watching Creighton!

So much for Wisconsin. We don't need no stinkin' Badgers (Treasure of the Sierra Madre pun intended).