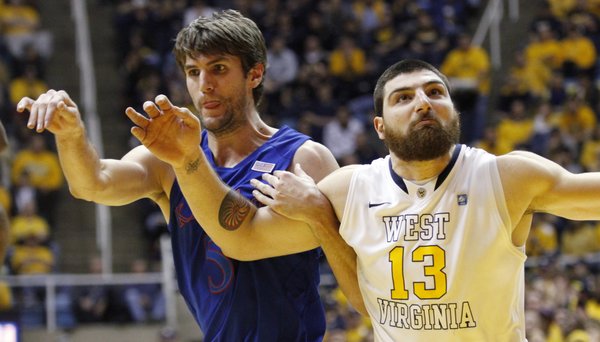 Kansas center Jeff Withey battles with West Virginia's Deniz Kilicli (13) in the Jayhawks' game against the Mountaineers on Monday night in Morgantown, W.Va. by Mike Yoder

• Offensive rebounding: The three strengths I'm about to describe are going to sound a lot like Frank Martin's previous teams at Kansas State. Martin, obviously, was a disciple of WVU coach Bob Huggins, so this shouldn't be too surprising. The Mountaineers are the top Big 12 team in conference play in offensive rebounding percentage, grabbing 37 percent of their missed shots. Part of the reason for this is WVU's height in the post, as 6-foot-9 Deniz Kilicli, 6-10 Aaric Murray and 6-10 Kevin Noreen all rank in the top 350 nationally in offensive rebounding percentage.

• Getting to the free throw line: West Virginia boasts the Big 12's best free throw rate in league play, averaging 23.2 free throws attempted per game despite playing at the conference's eighth-slowest pace. Kilicli and 6-2 guard Eron Harris are the team's two best players at getting whistles, as both rank in the top 250 nationally in fouls drawn per 40 minutes.

• Forcing turnovers: West Virginia has created turnovers on 22 percent of its defensive possessions in Big 12 play, which is the best mark in the conference. KU struggled with giveaways in its first game against WVU, turning it over 16 times in a slow, 61-possession game (26.2 percent).

• Shooting: West Virginia has struggled to shoot it from everywhere. In Big 12 play, the Mountaineers have made 44.5 percent of their twos (eighth) and 67.3 percent of their free throws (seventh). They've actually improved their three-point percentage to 33.9 percent (fifth), but even that isn't as good as it seems, as WVU's season three-point percentage is 30.5 percent (302nd nationally).

• Carelessness: The Mountaineers have given it away on 21.7 percent of their Big 12 possessions, which ranks eighth in the conference. WVU's big men actually are the team's most turnover-prone players, as reserves Dominique Rutledge, Noreen and starter Kilicli have the team's three highest turnover rates.

• Six-foot-2 guard Eron Harris (No. 10) is one of West Virginia's best scoring options thanks to a diverse offensive skillset. Not only is the freshman good at drawing contact, averaging 5.1 fouls drawn per game (237th nationally), but he's also the Mountaineers' best three-point shooter, making 37 of 100. What limits Harris the most is his playing time; he's played just 48.5 percent of the Mountaineers' minutes this season.

• Six-foot-10 center Aaric Murray (No. 24) is a great talent that too often finds himself in Huggins' doghouse. Like Harris, he's played less than half of WVU's minutes this year, but when he's in, he's been productive. He's an elite rebounder, ranking 68th nationally in defensive rebounding percentage and 142nd in offensive rebounding percentage. He's also a good shot-blocker (78th in block percentage) and a great two-point jump-shooter, as he's made 42 percent of his two-point jumpshots (NCAA average is 35 percent).

• Six-foot-9 forward Deniz Kilicli (No. 13, looks like a mountain man) has two skills: rebounding and getting to the free throw line, though he only makes 55 percent of his attempts when he gets there. Beyond that, his numbers aren't impressive. He has the highest turnover rate among WVU starters and also has made just 46.5 percent of his twos, which is a percentage point below the NCAA average. Though he has good height, Kilicli is not a shot-blocker, and he also fouls too often, averaging 4.9 whistles per 40 minutes.

Like so many other games, KU's offensive turnovers should be a huge factor.

If the Jayhawks can limit turnovers, there's not much reason to think it will be challenged in this game.

If KU gives it away often, though, it risks letting a poor offensive team in WVU hang around by getting some easy points in transition.

KU has been a good defensive rebounding team this year, and WVU probably won't get a lot of free throws when playing at Allen Fieldhouse, so I think the Jayhawks should be able to counter those two Mountaineers' strengths Saturday.

That means if KU gets shots, it should be fine.

I'll predict an above-average but not game-threatening number of turnovers for KU against WVU.

West Virginia is a team that allows a high two-point percentage and fouls a lot, so I'll take a gamble and say that Perry Ellis has a nice offensive game off the bench for KU. The freshman scored eight points in 15 minutes against Iowa State on Monday, and he'll have to give great effort on the defensive glass Saturday to remain in the game against WVU. I'll say he provides another strong offensive game while continuing to peak at the right time.

If he and Andrea Hudy had a baby it could bench press Brittany Griner.

I had to get a new avatar from Adidas but it doesn't come in camo. Perry Ellis is the next total break out Hawk just like Jesse said.

Travis, he wants that 1000 point career and time is running out.

Worst case scenario he has 5 more games to get there, and he would need to average 25.2 per game. I don't even want to consider that scenario though!

If we win out that gives us 12 more games and he'll need to average 10.5 over that span. So those are the extreme cases.

If there is ever a Street Fighter movie... I expect to see Kilicli as Zangief

Indiana Jones and the Angry Anthropologist.

I'm expecting Ben to bounce back.