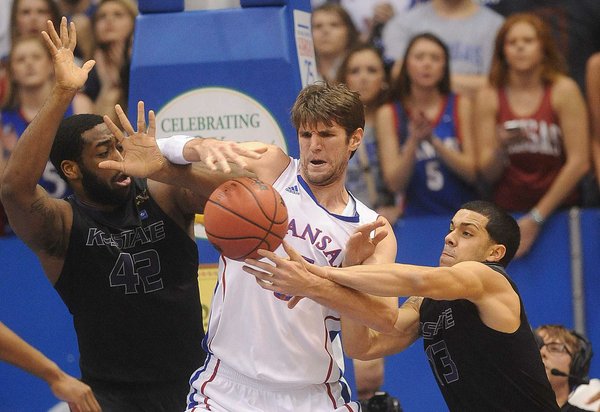 • For a refresher of Kansas State's strengths/weaknesses, check out the Five-minute Scout from Feb. 11.

0.867 — The number of points per possession Kansas State's defense allowed against Oklahoma State on Friday night — the second-worst output for the Cowboys this season. OSU especially struggled with its shooting, as its 34.7 effective field goal percentage against KSU was its worst in the last two seasons. The Wildcats also played exceptional defense against Texas on Thursday, holding the Longhorns to 0.862 PPP.

• 39.6 percent — Kansas State's two-point percentage against KU this year (23-for-58). The Wildcats have tried two different styles of play offensively against KU with similar results. KSU avoided KU center Jeff Withey altogether in the first matchup, shooting 30 threes compared to 27 twos (Withey had no blocks) while putting up 0.92 points per possession in a 59-55 loss. In the second matchup, KSU shot quite a few more twos (31 twos, 19 threes) but that also resulted in getting to the foul line more for 0.91 PPP. Still, the tradeoff was that KU had six blocks that led to transition baskets, and consequently, KU scored 1.22 PPP to blow KSU out. If I'm KSU coach Bruce Weber, I go back to option No. 1, slow it down and believe that guys like Rodney McGruder and Shane Southwell will hit shots (and hope if they don't, the big guys underneath will battle to get the rebound).

• Six-foot-4 guard Rodney McGruder (No. 22) is a high-volume shooter that rarely turns it over, though his strength is actually two-point jumpshots (40 percent according to Hoop-Math.com; NCAA average is 35 percent) more than it is three-point jumpers (33 percent; NCAA average is 34 percent).

• KU has had problems guarding 6-foot-6 Shane Southwell (No. 1) on the perimeter, as he's made 44 percent of his threes against the Jayhawks this year (7-for-16), which also matches his season percentage from three (43 of 98, 44 percent).

Kansas State's best chance against KU is trying to "out-possession" the Jayhawks. By that, I mean the Wildcats — by grabbing offensive rebounds and winning the turnover margin — can gain a few points by simply having more shot attempts than KU.

So the two keys for KU are simple: Be strong on the defensive glass and limit turnovers against a KSU team that forces a lot of them (46th nationally in defensive turnover percentage).

In KU's two wins against KSU, it has done well in both areas. The Jayhawks have been especially dominant on the defensive boards, as KSU had its second- and sixth-worst offensive rebounding games against KU.

The Jayhawks will have to chase down shooters like McGruder and Southwell on the perimeter, but the advantage for KU is that KSU plays traditional 5 men like Thomas Gipson and Jordan Henriquez around the rim. This allows Withey to stay where he's comfortable and also gives KU an advantage on the defensive glass.

As mentioned above, if KU can play well in that area, it puts itself in great position to beat KSU.

Because KSU's offensive rebounding will be so important, I'll go with Jeff Withey as the Hawk to Rock. The senior might not have many blocked shots — the Wildcats actually are best in the conference at avoiding blocks because of the high number of jumpers they shoot — but I think he'll still have a huge defensive impact by grabbing KSU's misses.

Perry, The Admiral and Air McClemore

Jesse...you forgot one more HUGE factor...Bill Self would give his left testicle to avoid losing to Bruce Webmaster.

I see the Hawks being fired up as an answer to that little "net-cutting ceremony' that was held by Weber and Kansas State after the season ended.

I'm fairly concerned about Young and Ellis guarding Southwell at the 4.

KU out-rebounded KSU 40-23 in the last meeting. Withey's length should win out over Gipson's strength and weight. Ellis and Traylor are bigger than Southwell. We'll be fine on the glass if we stay in position and don't overreact to McGruder, Spradling and Williams coming off screens and pindowns.