Here's why Iowa State's offense is tough on Jeff Withey 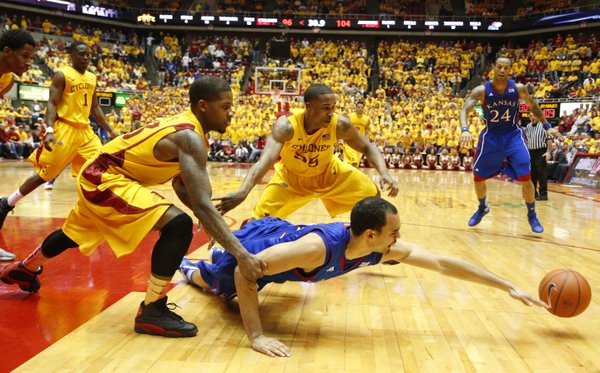 • For a refresher of Iowa State's strengths/weaknesses, check out the Five-minute Scout from Feb. 25.

• 1.157 — The number of points Iowa State scored per possession against Kansas in its 108-96 loss to the Jayhawks on Feb. 25. That's the third-highest number KU has allowed this season and the most KU's defense has given up in a win. ISU also scored 1.102 PPP against KU at Allen Fieldhouse in a 97-89 overtime loss, which was the fourth-highest total against KU's D this year.

• 47.5 — The percentage of Iowa State's field goals attempts in Big 12 play that have been three-pointers. The Cyclones don't care how many threes they shoot, and for good reason: Even with the high volume of threes taken, ISU leads the conference with 39.1-percent accuracy from long range.

• 17.3 — Iowa State's defensive turnover percentage in conference play, which is the worst mark in the Big 12. The Cyclones play passive defensively, an in trying to keep up with the league's best offense, KU can't afford unforced turnovers against a defense that usually doesn't create them.

• Six-foot-7 freshman Georges Niang (No. 31) is a nightmare matchup for KU at the 5, as he forces KU center Jeff Withey to guard perimeter because of his 39 percent three-point shooting (33 of 85).

• The Big 12 Newcomer of the Year 6-foot-7 forward Will Clyburn (No. 21) is dangerous because he can penetrate and get to the free throw line (116th nationally in fouls drawn per 40 minutes) while also shooting well enough that teams still have to pay attention to him on the perimeter (31 percent three-point shooting).

A team that can shoot from all five spots is the worst possible matchup for KU's defense, which is centered on Withey camping in the lane and blocking shots.

Here are a couple plays that show why ISU's spacing and offense are so difficult to defend.

In this first play, notice how the high ball screen puts Withey (and KU) in a bad spot. Ben McLemore is late to recover, and because of that, both Withey and Kevin Young step up to help on the ball-handler Chris Babb.

Notice what this does to KU's defense.

With Withey sagging to help on a possible drive, Babb stops to pass to Georges Niang on the perimeter. The pick-and-pop results in a wide-open three, as Withey has no chance of recovering in time. In this play, Korie Lucious' lob attempt luckily goes in, but pay attention instead to how many options ISU has.

After Perry Ellis helps up top, he hustles back to guard Melvin Ejim, who cuts to the basket.

Travis Releford takes one step forward to help Ellis recover, and that leaves Clyburn open on the baseline for a lob if Lucious would have gotten it next to the rim.

Notice also how Withey instinctively takes a step back to guard the basket. If Lucious had made a short pass to the wing, Niang would have had another open three-point attempt. Fred Hoiberg's NBA experience is serving him well at ISU, as his team's spacing and pick-and-roll offense is tough to guard, especially for a team with a true center like Withey.

The Jayhawks, who aren't as good offensively this year as some years past, simply outscored the Cyclones in the first two meetings.

I don't see KU being able to do it a third time.

After scoring just eight points in his last two games combined, I think we'll see a bounceback effort offensively from Travis Releford. ISU has poor transition defense, so look for Releford to try to leak out whenever possible to get KU easy buckets. Releford also took advantage of some openings on the perimeter against ISU, making five of nine three-pointers in the last matchup. Give me 15-plus points for Releford — a total he hasn't hit since the last ISU game.

If there was ever a game to consider zone . . . well that probably isn't going to happen but I can't help but wonder.

And before anyone brings it up . . . a triangle and 2 would be a horrible idea against an army of 3 ball shooters

Let's hope they are only average from deep and our O is clicking.

That is why we have to stick to man coverage and dominate on put backs and rebounds.

Any zone defense is very vulnerable to 3 point shooting so scrap it unless ISU is ice cold because 2-3 zones do make it tough to drive the lane. What KU should be focusing on is how to handle the amount of screening ISU does and boxing out for rebounds because ISU has killed KU on the glass and gotten a bunch of open shots from offensive rebounds.

My words exactly. A zone's not gonna work against them. I just hope they go through a cold spell for once against us (that would be nice!!) so we can actually build a lead. Rebounding (offense and defense) will be key for us.

Your idea of switching on picks sounds good. Above you said using a 3-2 is bad because then ISU can drive and kick out, but forcing them to drive is a good thing isn't? Especially, if KU defenders have the discipline in this case not to leave unguarded shooters on the perimeter and trust Withey to protect the rim? Assuming Withy could stay out of foul trouble, wouldn't it be preferable to take our chances with ISU shooting lay-ups over Withey rather than shooting threes? Or is this just not how it would actually work out?

Good joke, Jesse. Let me get this straight. You are picking the team who relies almost completely on perimeter shooting when the game is to be played in a wide open arena? Shooting is notoriously down in these types of venues which is why I would think anyone would favor the team that can get offensive production in the paint and in transition.

A guy told me once that it's because in the bigger arenas the background is so much further away, it changes the way that it moves vertically relative to the rim when the players jumps. It moves much slower and less overall making it hard for the guy to know when it's time to release the ball.

We'll find out tonight I suppose. I really don't want to lose this one. I never want to lose, but I just really want this one.

I'd like to believe you, kellerman, but it didn't seem to bother their shooting last night once they started heating up.

No question they will feel some extra "motivation" for today's game, but overall season's record is just that. Potentially tough game, but Hawks have too much 5 on 5 talent ~ as our season's record demonstrates.

Win or lose this is a great game for us to have heading into the tournament. They are much like a Mid-Major team that has a 4 and sometimes a 5 that can take Withey away from the basket. I think Self will stick with man/man and not give the entire nation an opportunity to scout and have film on another defensive look. There is no doubt that Self wants to win, but he has realized over the years that no one cares about winning the Big 12 tournament. It's all about wins in the next tournament. I have a good idea that Self has a few tricks up his sleeve defensively if needed in the tourney. RCJHKU!!

WIGGINS update if you did not see this.... This is all just talk from an article, but I think there is some truth to Wiggins feeling comfortable with Self and the rest of the KU basketball family. This makes me feel like we have a 40% chance. I would say 60%-70% if KU was not so far from his familiy. Maybe that could work in our favor as well and he could get out of the East coast exposure and be protected a bit at KU.

Anyone else have any update on Wiggins or Randle??

Return the favor, after all JW is shooting 100% from 3! In actuality I would feed Withey underneath with the instructions to attack Niang with intent to get him in foul trouble. Getting him pine time would damage ISU's ability to drag the 5 out of the paint. Easier said than done I know but Travis isn't the only Jayhawk that has had a couple of slow games. Give me an angry Withey for 12 - 10 and 8.

I do not expect this to be a close game, either way it goes.

I would use Ellis for attacking Niang instead of Withey. Ellis is a very capable scorer who has more attacking moves towards the rim versus Withey's hook moves. Plus it helps prevent Withey from getting in foul trouble.

Niang would beat Ellis like a Tom Tom. Ellis needs a couple of years in the weight room.

LOL, oh really... Ellis is a natural scorer. He just needed some time and coaching at the college level. Called it, thanks to a Young injury.

LOL, oh really... Ellis is a natural scorer. He just needed some time and coaching at the college level. Called it, thanks to a Young injury.

Unfortunately, today's game turned out to be a heart attack special for him. In the end, as the blood came barreling down the vein, it was blocked, to compound matters, a valve reached in, and blood banked in to critical areas at the last second.

In lieu of money, please send all your videos of Ben Mclemore's seventh made three pointer of the day. We will be using them to help model and construct a 3-D die-o-rama for his memorial in Ames.

It's called a triangle and two defense. It woulda helped against Baylor. Let's hope it surfaces, today.

Or... we need to play lights out aggressive Defense the first 5 minutes.

This site is chock full of good basketball knowledge. Love reading it, and I’ll be looking for many of the things that have been discussed here.

I have no prediction due to superstitions, but one thing in Jesse’s analysis stood out to me.

"The Cyclones play passive defensively, an in trying to keep up with the league's best offense, KU can't afford unforced turnovers against a defense that usually doesn't create them.”

We had way too many in the first two games. 14 to their 11 in the first game. 15 to their 7 in the second game. Limit those turnovers!

Then the question is... Who will go for 30 tonight?

Rock Chalk, this is gonna be a good game.

I hope your wrong Jesse. I am scared like Michael too but so far KU is up by 9 with 15 left