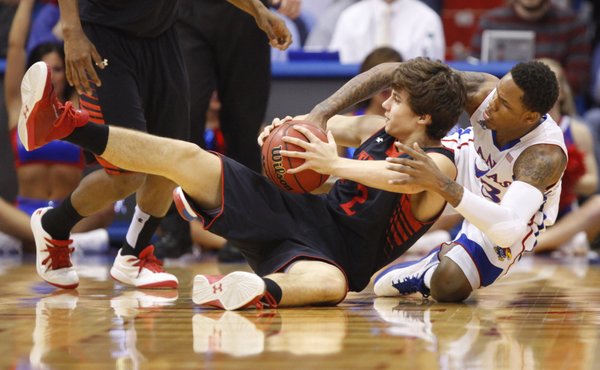 Kansas guard Ben McLemore tries to wrap up a pass by Texas Tech guard Dusty Hannahs during the first half, Monday, March 4, 2013 at Allen Fieldhouse. by Nick Krug

Team: Texas Tech
Record: 11-19
KenPom (Ken Pomeroy) Ranking: 254
All statistics from KenPom.com and are as of Thursday unless otherwise noted

• For a refresher of Texas Tech's strengths/weaknesses, check out the Five-minute Scout from March 4.

• 27.8 — The Red Raiders' three-point percentage during the regular season, which was the worst mark in the conference and 10th-worst in the NCAA. It was a shock, then, when Texas Tech hit eight of 12 three-pointers in Wednesday's 71-69 victory over West Virginia in the opening round of the Big 12 tournament. Jaye Crockett — previously a 29-percent three-point shooter — made three of three, while Ty Nurse — a 25-percent long-range shooter — was 3-for-4.

• 0.61 — Texas Tech's points per possession in March 4's 79-42 loss at KU. That was the second-worst offensive performance by a Red Raiders' team in the last 16 seasons and also was the worst offensive effort by a team in a Big 12 game this season. Texas Tech's biggest nemesis was poor shooting, as the Red Raiders' 27.4 percent effective field-goal percentage that night was their worst mark since at least the 1997-98 season.

• Six-foot-7 Jordan Tolbert (No. 32) is automatic around the basket, making 55 percent of his twos in the regular season with 62 percent of his field goal attempts coming at the rim (according to Hoop-Math.com).

• Six-foot-7 forward Jaye Crockett (No. 30) plays bigger than his size, ranking in the top 100 in offensive rebounding percentage while making 78 percent of his layup/tip/dunk attempts (NCAA average is 61 percent).

• Six-foot-1 guard Josh Gray (No. 5) had six assists against West Virginia on Wednesday, but his offensive production is hurt by a high number of turnovers and a poor three-point percentage (15 of 79, 19 percent).

KU hasn't always played well in its opening game of the Big 12 tournament. Still, the Jayhawks have never played an opponent this bad.

This was a good year to be the No. 1 seed, and KU shouldn't have any issues against an overmatched Texas Tech team that doesn't do much well offensively or defensively.

Kevin Young has made 12 of 15 field goals against Texas Tech this year (80 percent), and if he stays out of foul trouble, he should be able to put up numbers again Thursday. Texas Tech allows a lot of layups, struggles with defensive rebounding and is vulnerable to opponent steals, and those three weaknesses match up with Young's strengths. Mark me down for double-figure scoring and at least four offensive rebounds and two steals from the senior.

I am going with Jeff Withey as Hawk to Rock

A team with the talent level like TT doesn't hit 67% threes two nights in a row.

I would love to see Ellis have another good game. If he can get some confidence and consistency going into the NCAA tournament that would boost our chances quite a bit.

Travis always plays well in KC, I look for him to be tourney MVP.

Well, noones picked Ben Mac, I'll say he breaks the freshmen record in a post season tournament tonight with 38 points. Atleast I think that would do it.

I will take Tyler if he hits those two 3's, has no TO's a reb and a steal.

unfortunately though, you can't pick a hawk to rock after the stat sheet is already filled out.

Wow, as it turns out, Rio had more points than any senior did. Hope EJ can start scoring again.