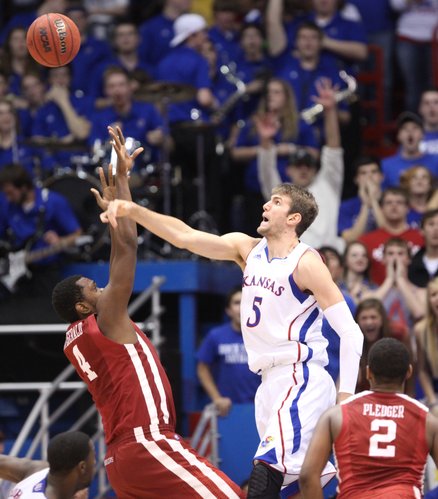 Kansas center Jeff Withey rejects a shot by Oklahoma forward Andrew Fitzgerald during the second half on Wednesday, February 1, 2012 at Allen Fieldhouse. by Nick Krug

• Offensive rebounding: Oklahoma has grabbed 35.5 percent of its missed shots, which ranks 67th nationally. The Sooners actually have upped that total in Big 12 play, posting a 37.3 percent offensive rebounding percentage, which is second-best behind West Virginia. OU doesn't have one dominant offensive rebounder but instead has four guys in Amath M'Baye, Andrew Fitzgerald, Buddy Hield and Romero Osby that are above average on the offensive glass. Remember, one of Kansas' best strengths this year has been defensive rebounding, and after a strong effort on the defensive glass against Kansas State on Tuesday, the Jayhawks will be tested in that area again.

• Turnovers: The Sooners have been solid on both ends when it comes to turnovers. They've given it away on just 18.9 percent of their possessions (92nd nationally) while forcing turnovers on 21.7 percent of opponents' possessions (110th nationally). Playing at an NCAA average pace, OU has averaged just 12.7 turnovers per game. Though KU coach Bill Self said this week he'd like to see his team get more opportunities in transition off his defense, that might be difficult against a Sooners team that emphasizes ball security.

• Foul avoidance: OU ranks 54th nationally in defensive free throw rate, which measures the percentage of free throws shot compared to field goals. Opponents average just 16.2 free throw tries against the Sooners, and Texas had just 11 attempts in its 73-67 loss to OU on Monday. Because of its ability to avoid whistles, the Sooners have had just one foulout all season.

• Three-point shooting: Not only is Oklahoma a poor three-point shooting team — it's a poor three-point shooting team while not attempting many. The Sooners have hit just 32 percent of their shots from deep this year (228th nationally), and that's with a low number of treys attempted (25.7 percent of field goals attempted are threes, 311th-highest split nationally). I wouldn't expect OU to completely change its offensive gameplan against KU's defense (the Sooners have the top offensive efficiency in Big 12 games so far), so be prepared for this team to take it inside against KU's interior defense while passing up most three-point shots.

• Two-point shot selection: Much like Kansas State, Oklahoma takes a lot of two-point jump shots — statistically the worst shot in basketball. According to Hoop-Math.com, 29 percent of OU's shots are at the rim (NCAA average is 34 percent), while 45 percent of its shots are two-point jumpshots (NCAA average is 33 percent). While KSU is an above-average team shooting two-point J's, OU isn't (34 percent, compared to 35 percent NCAA average). Despite great accuracy on close shots, the Sooners still are below the NCAA average for two-point shooting (47 percent compared to 47.3 percent). Much like many of the K-State teams under Frank Martin, it appears this OU team is best offensively when it can turn missed shots into offensive rebounds and easy points at the rim.

• Six-foot-8 forward Romero Osby (No. 24, red elbow pad) is one of the most complete players KU will see this season. The senior takes 24.9 percent of the Sooners' shots (458th nationally) while remaining impressively efficient because of his accurate shooting (289th in effective field goal percentage) and low turnover numbers (101st in turnover rate). His best skill, though, is getting to the foul line, as he draws 6.8 fouls per 40 minutes (21st nationally) and has made 82 of 100 free throws (during one six-game stretch, he made 31 straight free throws). Osby is OU's best defensive rebounder (202nd nationally), a talented shot-blocker (337th nationally) and also a good jump-shooter (leads OU regulars with 42-percent accuracy on two-point jumpshot percentage). Statistically, Osby should be in the running for first-team All-Big 12 honors, but he probably won't get there because his minutes (and, thus, counting stats) are limited by coach Lon Kruger, who subs out the senior more than he should.

• Six-foot-4 guard Steven Pledger (No. 2) has basically maintained his above-average offensive skillset from a year ago. The senior combines a low turnover rate (377th nationally) with a good shooting touch, making 36 percent of his three-point tries (35 of 97). He also takes 24.6 percent of OU's shots (499th nationally), which means the highest portion of the Sooners' shots are coming from their two best offensive players. KU should have no fear about Pledger penetrating off the dribble, as only four percent of his field-goal attempts this year have been close shots. Pledger is a good two-point jump-shooter (41 percent), though, and much like KSU's Rodney McGruder, KU's defenders (most likely Travis Releford) will have to weave through a number of screens to try to keep him from getting loose. Pledger also could hurt the Jayhawks if they try to overhelp on Osby inside.

• Six-foot-9 Amath M'Baye (No. 22) is an athletic junior whose specialty is leaping high to throw down alley oops. His other main offensive skill is rebounding, as he's the Sooners' best on the offensive glass (355th nationally). M'Baye — a transfer from Wyoming and native of France — still is a bit of a raw, though, as a high turnover rate and poor three-point shooting in limited attempts (1-for-9) has resulted in him becoming a below-average offensive player. M'Baye would be best suited sticking to shots at the rim, where he leads the team with 81-percent accuracy. Despite this, 49 percent of his shots have been two-point jumpers, which isn't his forte (32 percent).

Give credit to Kruger, who has helped his team jump 31 spots in KenPom's rankings since Dec. 29. This is an improved team from a year ago, and also one that has played its best since Big 12 play began.

This feels like a tough spot for the Sooners, though. For one, the game is at Allen Fieldhouse, a location where OU has lost by an average of 21.7 points in its last three games.

For two, OU's two biggest offensive strengths (scoring inside and offensive rebounding) appear to line up perfectly with two of KU's biggest strengths (interior defense and defensive rebounding). OU doesn't get to the free throw line much either, meaning the potential for long offensive droughts will be there if the Sooners can't hit jump shots.

If that happens, expect a runaway victory for the Jayhawks.

Travis Releford has a history of playing well against OU and also frustrating Sooners guard Steven Pledger. I'll predict that Releford backs up his outstanding game against Kansas State with another strong defensive effort against Pledger and OU.

I am going with Mr. W as Hawk to Rock.

Good call. It would be nice to see Releford score a ton of points too.

Good. A team that won't launch 30+ 3 pointers on us.
I'm ready to watch Ellis continue to improve and take over the 4 spot.

Get Jordan Jeuneman over here stat!

H-to-R: Kevin Young. The Sooners will double-team Withey and leave KY alone. They will regret it...

This should be an exciting game. 3 PM on ESPN ...count me in.

Jesse, I hope you are correct about the scoring margin this time. Too many close games at home to be considered the runaway champ in the Big XII. Would be nice if KU could make an infactic statement and lead from the beginning to the end and squash any hopes of an upset early on.