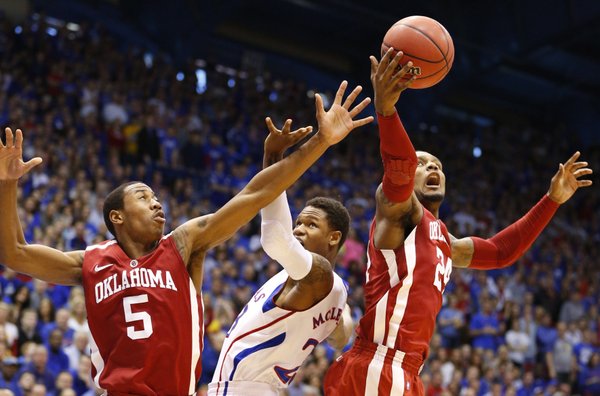 Kansas guard Ben McLemore loses a rebound to Oklahoma forward Romero Osby, right, during the first half on Saturday, Jan. 26, 2013 at Allen Fieldhouse. At left is Oklahoma guard Je'lon Hornbreak. by Nick Krug

• Avoiding fouls: Oklahoma enters Saturday's game as the top team in Big 12 play when it comes to defensive free throw rate, as opponents have averaged just 16 free throws per game against the Sooners in conference play. This will be an interesting subplot to watch, as KU has the Big 12's best offensive free throw rate in league play while averaging 25 free throws per game. KU could definitely use chances to score at the line with the offense struggling the way it has recently.

• Drawing fouls: OU ranks eighth in Big 12 play in offensive free throw rate, averaging just 18 free throw attempts per game. This makes sense considering the fact that the Sooners shoot a lot of jump shots. According to Hoop-Math.com, 39 percent of OU's field goal attempts are two-point jumpers, which is well above the NCAA average of 33 percent. Unless the Sooners have a wide-open layup, they're often hesitant to attack the rim, instead settling for many short jumpers.

• Three-point shooting: Oklahoma doesn't rely much on three-point shots, and there's good reason for that: The Sooners don't have many gifted outside shooters. OU has made just 30.9 percent of its threes this year (281st nationally), and that number looks even worse when realizing the Sooners are choosy with the outside shots they take. Only two OU players have attempted more than 50 threes this year: Steven Pledger (40 of 115, 34.8 percent) and Buddy Hield (19 of 65, 29.2 percent).

• Blocking shots: Though OU has good size, it's not a team that challenges inside shots well. Part of this could go back to the defensive strategy of avoiding fouls. The Sooners have blocked just 7.1 percent of opponents' twos in Big 12 play, which ranks ninth in the conference.

• Six-foot-8 forward Romero Osby (No. 24) remains the best player in the conference that nobody talks about. The senior hasn't played as well since his 12-point, 4-for-16 performance against KU on Jan. 26, but he still is easily the Sooners' best offensive weapon. Osby does a great job of using pump-fakes to get defenders in the air, drawing 6.2 fouls per 40 minutes (63rd nationally) while posting the nation's 104th-best free throw rate. He's a 79.8-percent free throw shooter, so fouling him often results in two points. Osby almost never turns it over (105th in turnover rate) and is a solid offensive and defensive rebounder and an above-average two-point jump-shooter. Osby struggled going against KU center Jeff Withey's length in the first matchup, so I'm guessing we see him try to attack Withey a different way Saturday.

• Six-foot-9 forward Amath M'Baye (No. 22) is an athletic post player who thrives at the rim. According to Hoop-Math, M'Baye has made 84 percent of his close shots this year, which dwarfs the NCAA average (61 percent). M'Baye also thrives on the offensive glass, where he pulls down 9.7 percent of the available offensive boards (381st nationally). M'Baye does have some flaws offensively, though, turning it over at a high rate while making a below-average number of his two-point jump-shots. M'Baye also has clanked nearly all of the limited three-pointers he has taken (2-for-15 accuracy, 13 percent).

• Six-foot-4 guard Steven Pledger (No. 2) is OU's only real threat from the outside. As mentioned above, he's made 35 percent of his threes this year, though that's probably below his true talent level, as he was a 42-percent three-point shooter a year ago. Pledger is purely a spot-up shooter behind the arc, as 89 percent of his threes this year have been assisted. He's struggled in his last two games, combining to go 0-for-7 from three against Kansas State and Iowa State. Pledger also rarely turns it over, which makes him a solid offensive player for the Sooners.

I was off by a mere 32 points with my last prediction, so yeah, there's that.

I do think KU will win this game, though. Though the Jayhawks didn't play well against TCU, a huge issue was simply shooting. KU made 11 of 27 layups against TCU (41 percent), a number that will be tough to replicate the rest of this season.

The Jayhawks' interior defense bothered the Sooners in the first matchup, and I'm not sure what OU can do to overcome that. The Sooners aren't a team that can rely on outside shooting to beat KU, and because they don't draw many whistles, it's unlikely they'll be able to pull Withey out of the game with foul trouble.

Most likely, OU will pull up for a lot of two-point jump-shots, hoping that an above-average number of those attempts go in.

KU should feel good about its chances if it can keep turnovers down to force OU to run its offense with Withey inside.

From there, it'll be up to the Jayhawks to make those layups that they missed against TCU. The law of averages (KU has made 64 percent of its close shots this year) would suggest a bounceback is likely.

After struggling with his last two defensive matchups, this feels like a game where Travis Releford will thrive. Not only does he have a history of big games against OU (28 points in his last game at Lloyd Noble Center), but he also should be focused on his important defensive assignment, which will be to limit the shot attempts and makes of OU's Pledger. Look for Releford to get back to scoring in transition as well, as he's averaged just 4.5 points and three field goal attempts in his last two games. I'll say the senior gets back to double-figure scoring against OU on Saturday.

No worries Jesse, even the vegas odds makers were off a mere 27 points! No one, and i mean no one saw that coming. I trust in Coach Self to get these guys back on track, and I really think we'll bounce back this game. I'm thinking 65-54. ROCK CHALK!

Hope you're right about Travis

Hey what's up with the game? "ESPN or ESPNU"? When will we know?

I am here in Wichita and my my digital television guide has the game on ESPN. I have my DVR set to it. So ESPN and I will be angry if it is not because I am unable to watch the game live. I have Cox Cable.

Thanks guys, knowing that I'll be good to go!

I'll leave the predictions to Keegan but my Hawk to Rock is EJ. Just because.

My thought is that with OSU and TCU a weakness was 3pt shooting. Somehow that turned out to be an advantage for both teams against us.

KU winning would be the upset......given the last 2 months performance.

The last two months made KU one of the two teams in College BBall, the last two games not so much...

Nope. He apparently doesn't have that in him. He will probably do ok....but take only 6-7 shots.

We'll see DebbieDowner........He leads the team in scoring and is second in the Big12, I beg to differ.

I agree I am a downer......but somewhat justified. Very poor play from Ben Mc lately. EJ gets all the blame.....but he's not the only one. Lot of turnovers from Ben. For now.....enjoying Miami beat up UNC and ol'Roy. Ha Ha.

Didn't he have 33 against ISU? And he had 18 against OU the first time around.

Being a top ranked team is the kiss of death. Look at Louisville, Duke, Michigan, Indiana, KU...

I prefer we stay slightly under the radar and go wild at the Big Dance. No reason to give opponents a big bull's eye, not that we don't already.

We will win by double digits. I couldn't be more confident about that.

LA-Hope so......but I'm not expecting it. They looked shell-shocked the other day. Only caveat would be the rumor that the flu hit the whole team. If so that would explain a lot.

Its good that UNC is currently getting pummeled by Miami, so there's little chance of their game going to OT which means won't miss any of the KU feed. Its also good to see UNC getting pummeled period ;)