TCU has regressed since win over KU 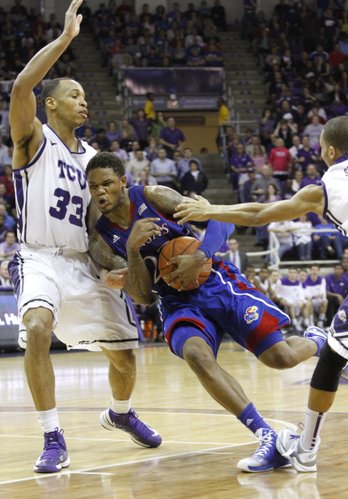 Ben McLemore (23) tries to turn the corner on defender Garlon Green (33) in the Jayhawks 62-55 loss to Texas Christian University, Wednesday at TCU in Ft. Worth, TX. by Mike Yoder

• Getting to the free throw line: TCU has the nation's 57th-best offensive free throw rate, averaging 19.8 free throws per game while playing one of the nation's slowest tempos. That's not always a huge positive for the Horned Frogs, though, as their 58.7 percent free throw percentage is the fourth-worst in the nation.

• Forcing turnovers: In Big 12 play, TCU is fourth in the conference in defensive turnover percentage, creating giveaways on 20.3 percent of opponents' possessions. For the season, the Horned Frogs ranked 120th nationally in the stat (21.2 percent).

• Avoiding fouls: TCU is second-best in Big 12 play when it comes to defensive free throw rate, with conference foes averaging just 16.3 free throws per game. For the season, opponents are getting just 18.7 percent of their points against the Horned Frogs from the line (259th-highest split nationally).

• Shooting: TCU shoots a high number of two-point jumpshots according to Hoop-Math.com (47 percent of its shots, 16th-highest split nationally) and does it without much success (32 percent; NCAA average is 35 percent). This has crushed the Horned Frogs' two-point percentage, which sits at 42.8 percent (319th nationally). Though TCU is extremely selective with its three-point shots, it still shoots a horrible percentage from there as well, making just 28.7 percent of its long-range tries (330th nationally).

• Turnovers: TCU ranks 284th nationally in offensive turnover percentage (22.3 percent), and that number has stayed steady throughout the season. In Big 12 play, the Horned Frogs are last in the conference in turnover percentage, edging out Texas Tech for the bottom spot.

• Six-foot-7 small forward Garlon Green (No. 33) had the best game against KU in the first matchup, putting in 20 points on 7-for-13 shooting which included 2-for-4 three-point shooting. KU fans will be happy to know that it took him four games after that to get seven more made field goals, as he went 1-for-12 against West Virginia, 2-for-9 against Oklahoma, 3-for-11 against Iowa State, then 6-for-15 against Texas. Green is a volume shooter (27.1 percent shot percentage, 246th nationally) that shouldn't be based on his numbers, as he's made just 39.4 percent of his twos and 32.3 percent of his threes. Though Green doesn't get to the free throw line often, he is TCU's best shooter there (77 percent).

• Six-foot-7 forward Connell Crossland (No. 2) isn't much of a scoring threat, but he is a great rebounder, as evidenced by his game-high 15 rebounds against KU in the first meeting. Crossland actually is a better offensive rebounder (181st nationally) than defensive rebounder (300th nationally), as he's averaged 3.2 offensive rebounds per game over his last six contests. Crossland gets a high percentage of his shots at the rim, which helps his two-point percentage (50.8 percent). He's terrible from the free throw line, though, making 33 of his 73 shots there (45.2 percent).

• Five-foot-11 point guard Kyan Anderson (No. 5) is TCU's best perimeter player. Though he takes the second-most shots on the team (24.7 percent, 474th nationally), shooting isn't his best asset. The sophomore is a good passer, posting the nation's 166th-best assist rate, while also providing the Horned Frogs with their best perimeter defender, ranking 330th in steal percentage. Anderson is prone to turnovers, though, and his two-point percentage (43.8 percent) and three-point percentage (33 percent) aren't anything to brag about.

Somehow, four games later, the Horned Frogs have played poorly enough to move to a ranking below where they were before the KU game (285th).

In other words ... the KU win didn't make TCU any better. In fact, the team has been playing worse.

Sometimes in a mismatch game at the Fieldhouse, KU will have some mercy on its opponent, taking it easy in the second half while having some sympathy for a team that is rebuilding.

Poor TCU. That won't happen Saturday, as the Jayhawks — and their fans — won't be letting up after the Jayhawks get a huge lead with revenge on their minds.

TCU is a team that turns it over often and allows a lot of layups. That sounds like a game where Travis Releford could thrive. I'll say Releford finishes as a top-two scorer for KU with at least two steals.

I think TCU played their best game of the season against KU and KU played it's worst. I feel sorry for all the KU fans who were at that game. What a tragedy.

Boouk, you're mostly right. The only change being KU played it's worst game EVER. If this isn't a life changing spanking for TCU today, I'm going to be ticked off.

Even more ticked off than I already am, I mean.

Let's see a thumbs up for an unofficial straw poll.

My prediction for the game, at least one of the coaches kids scores today.

Normally I'm not in favor of running up the score when we're clearly going to win. But today I want to embarrass TCU.

As much as I want KU win by at least 30 points, why embarrass TCU? They did not embarrass KU; KU embarrassed KU. TCU is a rebuilding program and Conference member. I say win convincingly by a bunch but I see no reason to embarrass them; in the previous game they played hard, KU not so much.
Now, if the other team was Missouri, then by all means embarrass the bejesus out of them.

Especially the part about Mizzou. LOL!

Don't play Ellis. He is not ready to play against the Frogs.