Expect lots of free throws for KU against Texas 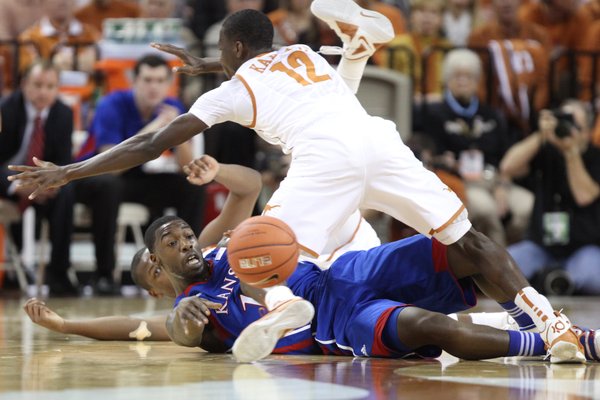 Kansas guard Elijah Johnson tosses a pass from the floor underneath Texas guard Myck Kabongo after a steal during the first half on Saturday, Jan. 21, 2012 at the Frank Erwin Center. by Nick Krug

• Interior defense: Texas is still one of the best teams in the nation when it comes to two-point defense. Though this area isn't as good as it was earlier in the season, the Longhorns still rank fifth nationally in two-point percentage defense (40.7 percent). This matches up with one of KU's strengths, as the Jayhawks are 37th nationally in two-point percentage (51.8 percent). In the first matchup, Texas held KU to 17-for-40 shooting from two-point range (42.5 percent).

• Myck Kabongo is back: Following a 23-game suspension, Texas' best offensive player Myck Kabongo returned to the lineup Wednesday against Iowa State. The impact was immediate, as the Longhorns scored 1.10 points per possession against the Cyclones — their second-highest output of the entire season. Kabongo — a 6-foot-1 sophomore point guard — immediately stepped into a high-usage role for the Longhorns, posting 14 points with seven assists and four turnovers against ISU. Texas' biggest struggle all season has been scoring, so Kabongo's presence gives the team a huge boost in its area of biggest need.

• Interior scoring: Texas has been effective scoring inside during Big 12 play, ranking second in the conference in two-point field goal percentage (49.6 percent). The Longhorns will have this strength tested against KU, as the Jayhawks remain as the top two-point percentage defense team in the nation (38.5 percent).

• Three-point shooting: Texas is the conference's worst three-point shooting team during Big 12 play, making just 26.2 percent of its long-range tries. The Longhorns haven't been much better for the entire season, making just 28.9 percent of their treys (324th nationally). Of UT's rotation players, only Ioannis Papapetrou has made more than one-third of his threes this year (38.6 percent, 22 of 57).

• Fouling too often: Texas has by far the highest defensive free throw rate in league play, as Big 12 opponents are averaging 27 free throws per game against the Longhorns. That's a bad quality to have coming into Allen Fieldhouse, which tends to bring out a favorable whistle for the home team. KU is first in the Big 12 in free throw rate while averaging 24.6 free throws in its 11 conference games.

• The return of 6-foot-1 guard Myck Kabongo (No. 12) gives Texas its best offensive threat off the dribble. The sophomore posted the nation's 19th-best free throw rate a year ago, pulling off the rare feat of shooting more free throws (172) than field goals (156). Kabongo also is a good distributor (61st in assist percentage in 2011-12) and a solid defender (500th in steal percentage in 2012). Kabongo wasn't a great shooter from the floor last season, making just 42.9 percent of his two and 31.6 percent of his threes. His biggest weakness, though, was turnovers, as his turnover rate was the highest on the Longhorns' rotation players in 2012.

• When not in his coach Rick Barnes' doghouse, 6-foot-4 guard Sheldon McClellan (No. 1) has been Texas' most consistent offensive player. The sophomore has taken 28.6 percent of his team's shots when he's on the floor (143rd nationally), and like Kabongo, he's best at drawing fouls. He's drawn 6.2 fouls per 40 minutes (52nd nationally) and already has shot 144 free throws this year, which is 20 more free throws than the top player on KU (Jeff Withey, 124). McClellan takes advantage of those tries, making 81 percent of his freebies. McClellan is a poor two-point (42.4 percent) and three-point (27.8 percent) shooter, but he remains as an above-average offensive weapon because he rarely turns it over.

• As mentioned above, 6-foot-8 forward Ioannis Papapetrou (No. 33) is Texas' only true three-point shooting threat. The freshman made two of three-pointers in the first matchup against KU and has made 13 of 35 threes (37 percent) in Big 12 play. Papapetrou's height allows him to have a unique skill set, as he's a good shot-blocker (410th nationally in block percentage) and a decent penetrator, drawing 4.6 fouls per 40 minutes (422nd nationally). Papapetrou, who is prone to turnovers, has an interesting shooting split: He's a good two-point jump-shooter (40 percent) but a poor free throw shooter (59.7 percent).

Much like the Kansas State game on Monday, KU should receive a huge boost from an amped-up Fieldhouse crowd that is hosting ESPN's Game Day.

That energy helped KU turn up the defensive intensity against KSU, and if the Jayhawks play that way again on the defensive end Saturday night, they shouldn't have any problem with the Longhorns.

Pay close attention to the pace of this game. Texas has a great half-court defense, so slowing the game down benefits the Longhorns, especially considering the Jayhawks are so good in transition.

Look for KU to force turnovers, get some easy points and force the ball inside offensively to draw fouls. With this atmosphere and these two teams' tendencies, it'll be a surprise if KU doesn't get to 30 free throws Saturday night.

Even with Kabongo back, I don't see this as a close game late. In fact, it could play out a lot like Monday's game, with KU starting with an early run before maintaining that lead in the second half.

Any time I see a poor defensive rebounding team, my immediate reaction is to put Kevin Young in this spot. So I'll go with my gut. Young's minutes have been reduced a bit recently with Self going to a smaller lineup, but this is still is a favorable matchup for the senior, who should have extra spring tonight with a loud Fieldhouse crowd behind him.

Hard to argue with KY, although I have a feeling Ellis is due for a coming out. I am worried about today's game from the standpoint of the team being over-energized resulting in careless turnovers.

Think Relly will cover Papapetrou? or is that going to be KY's job?

Jesse had some great calls with Naadir as the Hawk to Rock and a good point spread. Let's hope he stays on a roll today!!

I will take Naadir Tharpe as my Rock to Hawk. He will continue to be the facilitator, the penetrator and make things happen on O with his aggressiveness and driving to the paint.

Withey...Kabongo will drive right into his blocks as Withey displaces Mihm as the all time big XII leader is blocks. Fitting to have the blocks lead made against Texas.

KU by 1 in a hellish dogfight.

WOW, Jyabate..I'm glad I wasn't with you in Vegas splitting combo parlays this day!!! :)

I have been on a roll all season, then I entered a funk. :-)