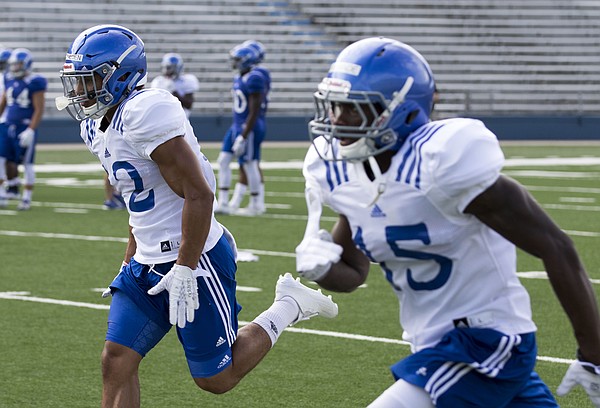 Kansas football coach David Beaty tipped his hand as to how he believes the team's three quarterbacks who have played this season — Montell Cozart, Ryan Willis and Carter Stanley — are imperfect fits for his offense.

Beaty did so when he pointed out that red-shirting New Orleans recruit Tyriek Starks was the first quarterback recruited to fit the current offense, although Stanley was recruited out of high school and Deondre Ford out of junior college after Beaty took the Kansas job.

Recruiting a quarterback from the graduate-transfer pool or from a junior college In the event Starks is not ready to run the offense by next season is a tempting thought, but doing so would deny the coaching staff the chance to recruit a high school player at another position who could be developed for four or five years.

Kansas already will need to go that route at cornerback, a position at which Kansas will be thin next season.

When talking about how fortunate the program is to have Murphy Grant in charge of supervising the rehabilitation of injured players, Beaty mentioned how well "the ACL guys" are progressing. Two of those he referenced play cornerback.

"They're all off their crutches and looking good," Beaty said. "Shola (Ayinde) looks amazing. I can't believe he just had surgery not too long ago. (Long snapper John) Wirtel, (walk-on cornerback) Justin Williams had ACL surgery last week."

"Murph is so good with them," Beaty said. "Those guys, they’re under anesthesia walking around in our facility the day they get out of that, which is amazing because they used to sit in a bed for weeks. I mean, Murph is so good at what he does with those guys. You would not believe those guys have just had ACL surgery."

Ayinde, who red-shirted in 2015 as a freshman, should be ready to play next season, but even with all the medical advancements athletes still tend to perform better in their second year after ACL surgery than the first.

Marnez Ogletree and Brandon Stewart are seniors, so recruiting a juco corner is a must, a bigger priority than bringing in another quarterback.

I'm not sure implying your three (non-red shirt) quarterbacks are imperfect fits for your offense is advisable. But, hopefully Mr. Starks is ready and able to compete for the starting job next season.

I wouldn't think that's a direction Beaty would go. If we look for any JUCO transfers I say we start at OL and then CB. I know we haven't had much luck with JUCO guys, but it'd sure be nice to have some guys come in ready that we can trust to protect Starks for next year. Our OL just isn't cutting it this year and hasn't the past 5 years.

That big fella from 'Bama is essentially a JUCO trx.

Isn't he a freshmen tho? I think he was booted from Alabama before he even got to play.

The receiver is a sophomore I believe, the OL was a JUCO transfer that got booted.

Baldwin was the No. 1-ranked juco O-lineman, participated in spring football with 'Bama and was kicked off the team after that for violating team rule. He is a junior. They won't be using a scholarship for juco lineman, but will for corner.

No to JuCo linemen on either side of the ball. The guys in the trenches need to be HS kids that will be around for 5 years to develop. Skill positions can be ready at any point so getting them out of JuCo's doesn't create the same issues JuCo linemen do.

JUCOs are important when depth at any position is not there for the upcoming season. Even OU recruits JUCOs when needed. Our two starting tackles from last season are being re-shirted this year, I believe, since they haven't played this season. We need to recruit another one or two DTs for next season.

I still have not received an answer to the Walk-on QB (from same HS as Keegan Brewer). Has he left town? Or, is he a Grey-Shirt candidate?

Dagan Haehn, is he no longer with the team? Or, is he grey-shirting?

Don't know what happened, but he is gone. I think he ended up at UTSA or another smaller TX school.

Dagan Haehn lists himself as a student-athlete at Texas State, but is not yet listed on the school's football roster. On Aug. 6, Haehn tweeted, "And the next chapter begins." On Aug. 14, he tweeted, "I'm choosing the path less traveled." Haehn retweeted Texas State coach Brett Elliott's "Boom! Big-time addition to the Bobcat family." Haehn retweeted it, but it's possilbe that could have been news about someone else. On Aug. 28, Haehn tweeted, "Glad I'm a Bobcat."

Wasn't Stanley recruited because of his success/familiarity with the Air Raid? I remember reading articles about this, and seeing Beaty on video saying that Stanley was recruited for this offense, and that was the only reason why they took two QBs that year. Is he really claiming now that Stanley wasn't?

The reason why most college QBs don't play their first 2-3 years at most programs is because they have to adjust to the speed of the college game and because most H.S. coaches are not QB whisperers, so most QBs don't get quality QB coaching until the college level, so it takes them some time to learn the position. Even JFF sat out a year, and he was the most instinctual QB the college game has ever seen.

We are 1) playing QBs who haven't had the luxury of being able to adjust to the speed of the college game and 2) not exactly providing our QBs with an experienced/proven QB coach. Beaty is an experienced HS/WR coach who acts like he is a QB whisperer.

Beauty is a good recruiter, and that is why he was brought here. When he was hired, I thought he had the smarts to know what his own limitations are and the ability to identify great coaches he could lean on to overcome his own lack of coaching experience. Now, I am not so sure that he knows what his own limitations are, or that he is willing to lean on his coaches who are more experienced than he is... he even paid Likens a salary higher than his own because he believed Likens was a better coach than he was. I do believe that he is good at identifying good coaches for the most part. The defense, OL, WR, and RB groups seem to be improving. Sorry to say this, but Willis looked better under Likens coaching than he does this year. You could even say that Willis is regressing under Beaty's coaching. Rather than recruiting a player who has already had better QB coaching, I would much rather see us recruit a better QB coach.

They found Carter really late in the game. I think he was a non-starter behind another D1 until his sr year. One of his strengths was his familiarity with the O and one of the few QB's still available late in the yr, but that doesn't mean that he has D1 air raid QB skills.

He is saying that Starks is the first, which calls more attention to Beaty believing that Likens' offense is not what he thought it would be, something that should have been addressed more thoroughly by the head coach before guaranteeing OC three years and $1.05 million.

I might imagine that when the season is over, we may see several QBs transfer out and more assistant turnover.

As noted in Dirk's comments below and in Tom's article, KU will be thin/inexperienced in the secondary...might have to find some interim solutions.

We've reached the point where we've stopped the massive bleeding, and are starting to recover to a healthy 85 man roster. We're still really young, but we're recovering. If there was a JC/transfer player that could make an immediate impact at virtually any position, they need to be considered, but it should remain a limited number of players.

We've got a truckload of QB's (depth) even if they aren't game changers. Game changing JC QB's aren't likely to come to a rebuilding program, tho Whitmore (?) did.

We lose 7 DB's this year. That's almost an entire 2 deep (assuming 5 DBs in our current system). We have 10 coming back, but that's 2 Jr's, 1 So, and 7 freshmen. We could use a couple experienced college players as DB's - safety and CB.