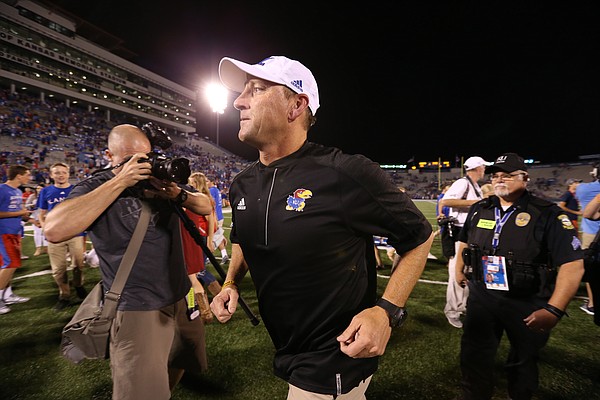 Computer rankings for any sport are inherently flawed, as is constantly proven with the men’s basketball NCAA Tournament selection committee’s overuse of the Ratings Percentage Index, more commonly known as RPI.

But as computer rankings go, the Jeff Sagarin Ratings, carried by USA Today, are better than most for both basketball and football.

Sagarin does not tell a pretty tale for Kansas football, which enters Saturday’s contest at Memorial Stadium 1-8 overall and 0-6 in the Big 12, same as Iowa State’s, but not the same when given a deeper look.

Iowa State’s average margin of defeat in Big 12 play is 11 points, compared to 30 points for Kansas.

Sagarin lumps all 128 FBS schools with the lower-division 125 FCS schools and Kansas does not fare well.

Sagarin has Kansas ranked 140th, one spot ahead of Liberty University, coached by Turner Gill, formerly of KU.

In contrast, Iowa State is ranked 79th, one spot ahead of Army, one spot behind Colorado State.

KU’s ranking is the lowest among schools from power-five conferences. Big Ten member Purdue, ranked No. 112 by Sagarin, is the next-lowest.

To get a feel for what schools Sagarin’s computer formula considers to be of similar strength, consider that the 10 ranked ahead of Kansas, from 130 through 139: Idaho, Wofford, Cal Poly-SLO, North Texas, Nevada, North Dakota, Charleston Southern, San Jose State, Princeton, Massachusetts.

Beaty seeks his firs Big 12 win Saturday, which would tie him in that category with Gill, Charlie Weis and Clint Bowen, interim head coach for the final eight games of 2014.

So what's the line? Are we 2 or 3 touchdown dogs against a 1-8 team? We better build up Iowa State because they are hungry for win #2. I hope our players are as hungry for our second win as they are. Sad as it may be, this game is a true measure of how far, or not, KU has come since last year. Rhode Island was no true measure. It just got us a victory against a really good high school team. Now, we get to pick on someone our own size. Can we look like a well coached, disciplined football team sans mental mistakes, turnovers, penalties, poor kick coverage, missed field goals, weird calls, etc? Sadly, little evidence so far would suggest the fundamentals and basics have been covered by this coaching staff. And believe me, I do not enjoy making such statements. I am just saying what I keep seeing every week.

Not that it matters but I believe we would beat all ten of the teams listed ahead of us. But to the point, Iowa State is probably better than their record. It may be our best chance for a win but based on comparative scores they have been much more competitive than us. The ESPN power index gives us a 25 percent chance of winning.