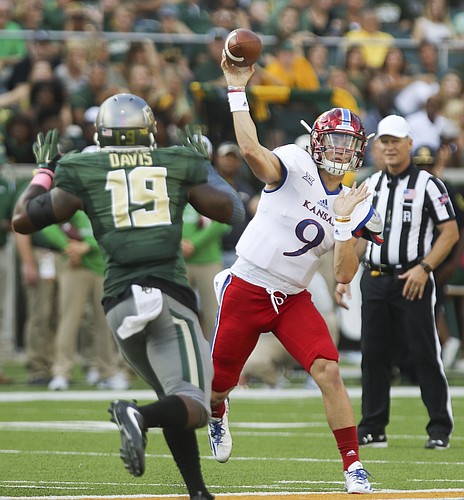 Thank redshirt freshman quarterback Carter Stanley for supplying it by running the offense more sharply than any KU quarterback has in quite some time Saturday in a 48-21 loss at West Virginia in a game that Kansas trailed 31-0 at the half.

Beaty used Stanley as his second-string QB for the second consecutive week, a promotion from third-string status. Not all of Stanley’s work in Morgantown came against the second string. He entered in the third quarter after starter Montell Cozart was shaken up and according to head coach David Beaty showed some concussion symptoms.

Stanley’s statistics — he completed 9 of 11 passes for 127 yards and two touchdowns with one interception — were impressive, but more than that, he looked like he knew what he was doing running the offense. He looked decisive, scanned the entire field looking for receivers, made the defense respect his running ability, and other than on an interception in the end zone on which his throw was wide left, to the side where the tightest coverage on LaQuvionte Gonzalez was located, he was pretty accurate.

Stanley’s threat as a runner made a defender freeze for a second, which enabled speedy running back Taylor Martin to run right past the defender to open space, where Stanley found Martin with a short pass that KU’s fastest runner turned into a 42-yard touchdown.

Less than half of one game does not a quarterback drought cure and questions remain about Stanley — arm strength, the swiftness of his release, two interceptions in 32 throws — but his encouraging performance at least gave KU football fans a reason to watch the Iowa State game Saturday. No point in not turning the offense over to Stanley for the final three weeks to see if he is a legitimate candidate to join a spring football competition that will include Tyriek Starks, a New Orleans high school recruit spending his first year at Kansas as a redshirt, plus in all likelihood a junior college or graduate transfer not yet in the Kansas program.

A forgotten man as recently as a few days ago, Stanley is back in the QB conversation. Even so, he has a long way to go before becoming as famous as a musician who entertained so many before his life came to a tragic end.

ISU at home would be a good spot to give him his first start and, unless the performance dictates a quick hook, Tom is right that you might as well ride with him the rest of the season, give him some time to develop and get some film that the new O.C. can review for next year.

Stanley did look comfortable. He was decisive, did not hesitate to run. His performance kept me from switching to another horror show that I had previously recorded.

I remember seeing Stanley in the waning seconds of an earlier game. He looked listless and disinterested at the time, but no doubt because of the hopeless situation. This time, with enough time to display his skills, he looked sharp and ready. I can't help but feel that we will be seeing him again soon. Quarterback talent with confidence could make a big difference.

Is Willis just off the team or demoted?

Still on the team. Beaty doesn't have official depth chart but last two weeks Stanley came in and a healthy Willis did not. If he wants to transfer, his pool of interested schools would be deeper if he stuck it out the rest of the season, which I'm certain he will.

Please give us Carter Stanley, Coach.

Erosion is a terrible thing. It is slow and unimpeded, and the destruction seen only by looking back. The erosion of confidence of not only the players in their coach but also of the assistant coaches in their boss is the hideous side of all this.

No one within the program would dare whisper that such may be the case at KU, because to do so would also reveal another ugly side of this equation. To quit on a coach or a boss is unthinkable to the competitive nature of these men.

Beaty HAS to give Carter his shot. He can't keep throwing Montell and Ryan out on the field and expect a different outcome. There's not much in the way of game film on him so let's take advantage of that against our best remaining chance to get a win.

Beaty should start Carter on Saturday. Im sure he wont tip his hand till kickoff so IowaSt has to prepare for both QBs...I do think Carter and Montell are the same type of QB, but Carter understands how to play the position better at the D1 level [I hope]....and I think he looks to use his legs way more than our other 2 QB's.

I agree it's time to give Stanley the opportunity to show what he can do over an entire game or even the remainder of the season. We already know nothing else has worked at that position so why not find out what he can do?

Cozart made some nice throws and had at least one good scramble. Still there are too many errors that justify him to be the QB moving forward. I'd like to finally move on from him for good and let him try another position. Our QB situation somehow got worse from last year to this year. Only option is to start Carter Stanley and hope for the best.

Glad to hear No. 3 because I once attended a UCLA basketball game and moved to open seats in a nearly half-empty building. Three ushers descended on me, like turkey vultures on roadkill. It was made clear to me I had committed an unforgivable violation. I did not return to the building until assigned to cover a game there years later. So kudos to the KU security for looking the other way on fans, extremely loyal fans who have stuck it out through these lean times, upgrading their seats.

The Uniform combination the Jayhawks wore at Oklahoma sure looked sharp.

For the head coach not to be able to recognize that Cozart is not a FBS quarterback is troubling to say the least. I'm sure on the practice field he's fantastic, but how many times does it take to see he does not have that "something" that is turned on when the real game begins. It took Mangino way to long to see that Todd Reesing was the "MAN". My hunch is that Carter Stanley may have that "something" if given the opportunity.